‘Please don’t kill me’: Police officer cleared of murder after shooting a sobbing man as he crawled along a hotel corridor

A former Arizona police officer has been acquitted of murder after he shot and killed an unarmed man outside his hotel room.

Philip Mitchell Brailsford, 27, shot Daniel Shaver in 2016 when he was responding to call that someone there was pointing a gun out of a window.

The shooting occurred in the Phoenix suburb of Mesa after officers ordered Mr Shaver to exit his hotel room, lay face-down in a hallway and refrain from making sudden movements.

Mr Shaver, a 26-year-old father-of-two, sobbed as he begged police not to shoot and was ordered to crawl toward officers.

Video of the shooting, which Shaver’s family has referred to as an “execution”, has finally been released.

It shows a sobbing Mr Shaver lying on the floor and crawling towards the police officer. He can be heard begging “please don’t kill me” at the officers. 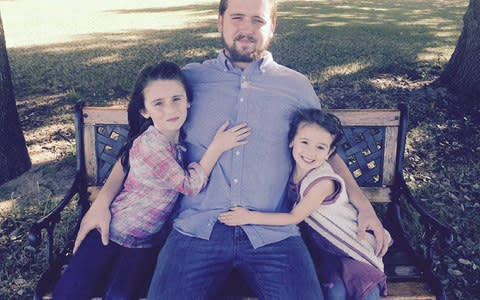 Daniel Shaver (pictured with his daughters) was heard saying “please don’t shoot me, please don’t shot me”, according to audio heard on a police video of the incident

As he inched forward, he reached toward the waistband of his shorts. Mr Brailsford said he fired his rifle because he believed Mr Shaver was grabbing a handgun in his waistband.

While no gun was found on Mr Shaver’s body, two pellet rifles related to his pest-control job were later found in his room.

The detective investigating the shooting had agreed Mr Shaver’s movement was similar to reaching for a pistol, but has said it also looked as though Shaver was pulling up his loose-fitting basketball shorts that had fallen down as he was ordered to crawl toward officers.

The investigator noted he did not see anything that would have prevented officers from simply handcuffing Mr Shaver as he was on the floor.

Mr Brailsford’s attorney Michael Piccarreta put an arm around his client after the verdict was read. 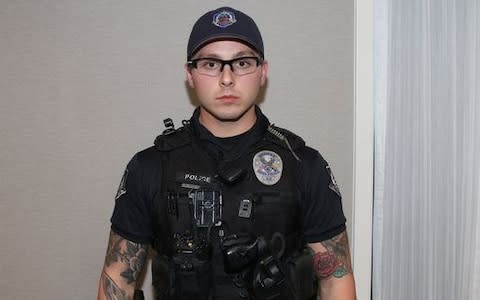 “There are no winners in this case, but Mitch Brailsford had to make a split-second decision on a situation that he was trained to recognize as someone drawing a weapon and had one second to react,” Mr Piccarreta said.

“He didn’t want to harm Mr Shaver… The circumstances that night that were presented led him to conclude that he was in danger. Try to make a decision in one second, life or death. It’s pretty hard.”

Mr Piccarreta also said he wasn’t sure his client would be interested in trying to get his police job back.   Mr Shaver’s widow, Laney Sweet, and Mr Shaver’s parents have filed wrongful-death lawsuits against the city of Mesa over the shooting death.

Ms Sweet shook her head after the jury’s decision and said she was not going to answer any questions.

During his trial testimony, Mr Brailsford described the stress that he faced in responding to the call and his split-second decision to shoot Mr Shaver.

Mr Brailsford told jurors that he was terrified for the safety of officers and a woman who was in the hallway. He also said he felt “incredibly sad” for Mr Shaver.

Mr Brailsford served as a Mesa officer for about two years before he was fired for violations of departmental policy, including unsatisfactory performance.

He is one of the few police officers in the US to be charged with murder for shooting someone while on duty.

The shooting occurred as police departments across the US became focal points of protests over deadly encounters with law enforcement.

Tower: Tell the guy not to move, police officer can then go to him and cuff him. Why would you tell the man to crawl, making everything more dangerous and confusing?!?!

SkywardSword: More training? Nope. convicting them and holding them accountable will work better.

LDC4: A case where the jury totally got it wrong. This police officer murdered this unarmed civilian. The video more than shows this. This cop just plain panicked and did not know how to do his job and as a result an innocent human being is dead. And people wonder why the police are not trusted?

Mary: What was the point in making him crawl? This is murder.

Hank: i’m in New Zealand even makes me sick looking at the father with his 2 beautiful little girls now left without their father for the rest of their lives to read this article

James: Any reasonable person can see this cop had ZERO reason to fear for his safety. The man had already complied for a good 3 minutes. The officers commands were confusing and contradictory. Just awful.

Live Long And Prosper: Really? Made him crawl? Once he was on the floor, all they had to do was handcuff him. Idiots. Hope the family is planning for a HUGE civil trial…this dept. deserves being bankrupted.

Fish’nFinatic: How can anyone look at that video and not think the cop executed this guy?

Franz August: It’s honestly amazing. I am an American Soldier. If I did this to an Iraqi I would be in prison for war crimes. It is absolutely insane that police can treat citizens worse than enemy civilians