There are 5 Blue Zones in the world; places where people grow older and stay healthier than in any other place.

The secrets of the world's blue zones: how to grow old, healthy

There are 5 Blue Zones in the world; places where people grow older and stay healthier than in any other place.👵🏽 👴🏽BrightVibes

This rep exposed a Trump appointee for not understanding the basics of consumer protection.

This rep whipped out the textbook she wrote to school a Trump official on the basics of consumer protection and the dangers of payday loans.

Rep. Katie Porter (D-CA) Uses Her Own Textbook to School Director of the CFPB on The Basics

March 31, 2019
Corporations are trying to kill protections for workers in the gig economy. It’s estimated that soon over 40 percent of the American labor force will be in such temporary or contract work. Here’s what we must do to ensure their rights are protected.

Why the Sharing Economy Hurts Workers

Corporations are trying to kill protections for workers in the gig economy. It’s estimated that soon over 40 percent of the American labor force will be in such temporary or contract work. Here's what we must do to ensure their rights are protected.

“The situation is worsening, and in the last 24 years I have seen no improvement at all.”

India wants to use flesh eating turtles to rid the Ganges of decomposing bodies.

“The situation is worsening, and in the last 24 years I have seen no improvement at all.”India wants to use flesh eating turtles to rid the Ganges of decomposing bodies.

The Koch-brothers funded Mercatus Center might not like that their report revealed Medicare for all will save Americans $2 trillion. But numbers don’t lie.

What the Koch Brothers Are Hiding

The Koch-brothers funded Mercatus Center might not like that their report revealed Medicare for all will save Americans $2 trillion. But numbers don't lie.

“This President and his party have no plan to provide care to tens of millions if the (Affordable Care Act) is gone,” CNN’s Chris Cuomo says of President Trump’s  moves regarding health care and Obamacare. https://cnn.it/2YBgmCS

“This President and his party have no plan to provide care to tens of millions if the (Affordable Care Act) is gone,” CNN's Chris Cuomo says of President Donald J. Trump's moves regarding health care and Obamacare. https://cnn.it/2YBgmCS

New Zealand passed major gun reform less than a week after the Christchurch terror attacks. Here's everything you need to know about the country's gun laws.

President Donald Trump is certainly known to bend the truth. The Washington Post has counted nearly a dozen false or misleading claims per day of his presidency, while Politifact scored 70 percent of his statements as Mostly False, False or Pants on Fire.

As it turns out, that propensity to lie also carries over to his longtime love of golf.

There’s already been the story of Trump naming himself the winner of a tournament he never played in, but former Sports Illustrated columnist Rick Reilly spells out the extent of the lying and cheating in his new book, “Commander in Cheat: How Golf Explains Trump,” which will be available on Tuesday.

“To say ‘Donald Trump cheats’ is like saying ‘Michael Phelps swims,’” Reilly writes. “He cheats at the highest level. He cheats when people are watching and he cheats when they aren’t. He cheats whether you like it or not. He cheats because that’s how he plays golf … if you’re playing golf with him, he’s going to cheat.”

Mulligans and tampering with balls

Trump’s most blatant cheating reportedly comes in the form of not playing his shots — or others’ — where they actually land.

When Trump played golf with Tiger Woods, world No. 1 Dustin Johnson and PGA Tour veteran Brad Faxon in February, Trump hit a ball into the lake. But when the other players weren’t looking, he got out another ball and hit another try, although that too went into the lake.

“So he drives up,” Faxon said, “and drops where he should’ve dropped the first time and hits it on the green.”

The cheating is not just to impress pro golfers. Reilly also details stories with ESPN announcer Mike Tirico, LPGA pro Suzann Pettersen and actor Samuel L. Jackson. In one of the most egregious stories, Tirico remembers hitting one of the best shots of his life squarely onto the green, but when he walked over, the ball was 50 feet away in a bunker.

Lying is par for the course for Trump

One of the strangest things about Trump’s history of lying while golfing is that he’s reportedly a very respectable golfer. However, he habitually lies about how good he is, including his self-reported 2.8 handicap, which is less than a stroke away from PGA legend and frequent golfing partner Jack Nicklaus.

Still, none of this is particularly shocking to anyone who has followed Trump. After he repeatedly admonished former President Obama for golfing and said that he would have no time to play himself, Trump has played a round every 4.2 days — twice Obama’s rate. And, naturally, he tends to lie and cover up how often he plays while on the job.

Washington (AFP) – US President Donald Trump has granted a new permit for construction of the Keystone XL pipeline, a controversial project that would bring oil from Canada to the US.

The XL project, a crucial segment in a network of pipelines linking Canadian oil fields to US refineries on the Gulf Coast, was blocked in November by a US federal judge.

It supersedes a previous permit that Trump had issued in March 2017.

“The president’s action today clarifies the national importance of Keystone XL and aims to bring more than 10 years of environmental review to closure,” it said.

It was not clear Saturday if, under the new permit, the project must also undergo new environmental impact studies.

The project has been fiercely opposed by environmentalists and indigenous groups because of the risk of oil spills and damage to sites considered sacred.

The XL portion of the pipeline calls for construction of a segment from Alberta, Canada to the Midwestern US state of Nebraska, creating a more direct route to the Gulf refineries.

The administration of Barack Obama blocked the project in 2015, citing the environmental risks.

And in blocking the project last November, US District Judge Brian Morris questioned whether a State Department analysis of the project’s cumulative impact on greenhouse gases and Native American land had been sufficiently rigorous.

The State Department had concluded that completing the pipeline was in the national interest of the United States.

The Canadian government also has forcefully advocated for the project, saying the added capacity was needed to relieve an oversaturated pipeline network. 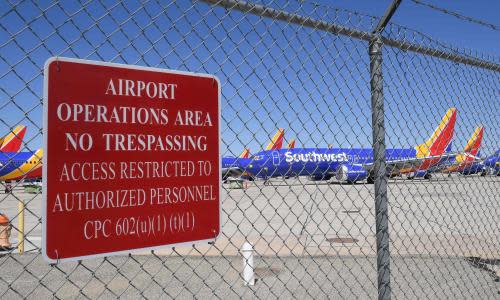 Why didn’t Boeing do it right? Why isn’t Facebook protecting user passwords? Why is Phillip Morris allowed to promote vaping? Why hasn’t Wells Fargo reformed itself? Why hasn’t Monsanto (now owned by Bayer) recalled its Roundup weedkiller?

These are just a few of the examples in the news these days of corporate harms inflicted on innocent people.

To be sure, some began before the Trump administration. But Trump and his appointees have unambiguously signaled to corporations they can now do as they please.

Boeing wanted to get its 737 Max 8 out quickly because airlines want to pack in more passengers at lower fuel costs (hence the “max”). But neither Boeing nor the airlines shelled out money to adequately train pilots on the new software made necessary by the new design.

Nonetheless, Trump’s FAA certified the plane in March 2017. And after two subsequent deadly crashes, the US was slower to ground them than other countries.

Last week Facebook admitted to storing hundreds of millions of Facebook users’ passwords in plain text that could be searched by more than 20,000 Facebook employees. The admission came just a year after the Cambridge Analytica scandal revealed that Facebook shared the personal data of as many as 87 million users with a political data firm.

In reality, Facebook’s business model is based on giving personal data to advertisers so they can tailor their pitches precisely to potential customers. So despite repeated reassurances by Mark Zuckerberg, the firm will continue to do what it wants with personal information.

The Federal Trade Commission (FTC) has the power to force Facebook to better guard users’ privacy. But so far Trump’s FTC has done nothing – not even to enforce a 2011 agreement in which Facebook promised to do just that.

Altria (Phillip Morris) was losing ground on its sales of cigarettes, but the firm has recently found a future in vaping. Because inhaling nicotine in any form poses a health hazard, the FDA commissioner Scott Gottlieb wanted to curb advertising of vaping products to teenagers.

Gottlieb thought he had Altria’s agreement, but then the firm bought the vaping company Juul. Its stock has already gained 14% this year. What happened to Gottlieb? He’s out at the FDA, after barely a year on the job.

Wells Fargo has publicly apologized for having deceived customers with fake bank accounts, unwarranted fees and unwanted products. Its top executives say they have eliminated the aggressive sales targets that were responsible for the fraud.

What has Trump’s Consumer Financial Protection Agency done about this? Nothing. It’s been defanged.

This week, a federal jury awarded $80 million in damages to a California man who blamed Monsanto’s (now Bayer’s) Roundup weedkiller for his cancer, after finding that Roundup was defectively designed, that Monsanto failed to warn of the herbicide’s cancer risk, and that the company acted negligently. It was the second jury in eight months to reach the same conclusion about Roundup.

Roundup contains glyphosate, a suspected carcinogen. Cases from more than 1,000 farmers and other agricultural workers stricken with non-Hodgkin lymphoma are already pending in federal and state courts.

What has Trump’s Environmental Protection Agency done about glyphosate? In December 2017 its office of pesticide programs concluded that glyphosate wasn’t likely to cause cancer – although eight of the 15 experts on whom the agency relied expressed significant concerns about that conclusion, and three more expressed concerns about the data.

Related: The US is on the edge of the economic precipice – and Trump may push it over | Robert Reich

These are just tips of a vast iceberg of regulatory neglect, frozen into place by Trump’s appointees, of which at least 187 were lobbyists before they joined the administration.

This is trickle-down economics of a different sort than Trump’s corporate tax cuts. The major beneficiaries of this are the same big corporations, including their top executives and major investors. But these burdens are trickling down as unsafe products, fraudulent services, loss of privacy, even loss of life.

Big money has had an inhibiting effect on regulators in several previous administrations. What’s unique under Trump is the blatancy of it all, and the shameless willingness of Trump appointees to turn a blind eye to corporate wrongdoing.

Trump and his Republican enablers in Congress yell “socialism!” at proposals for better balancing private greed with the common good. Yet unless a better balance is achieved, capitalism as we know it is in deep trouble.