The G.O.P. Is Rotting 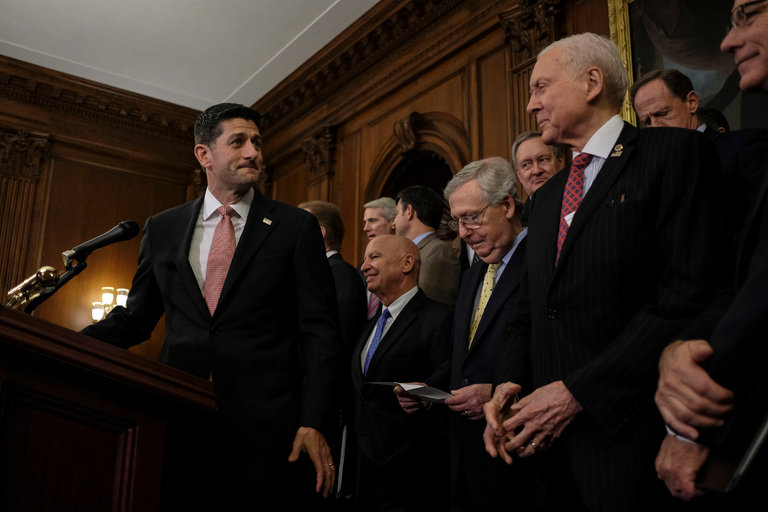 Paul Ryan, left, and other congressional Republicans released the framework on their tax plan in September. CreditGabriella Demczuk for The New York Times

A lot of good, honorable Republicans used to believe there was a safe middle ground. You didn’t have to tie yourself hip to hip with Donald Trump, but you didn’t have to go all the way to the other extreme and commit political suicide like the dissident Jeff Flake, either. You could sort of float along in the middle, and keep your head down until this whole Trump thing passed.

That’s the way these corrupt bargains always work. You think you’re only giving your tormentor a little piece of yourself, but he keeps asking and asking, and before long he owns your entire soul.

The Republican Party is doing harm to every cause it purports to serve. If Republicans accept Roy Moore as a United States senator, they may, for a couple years, have one more vote for a justice or a tax cut, but they will have made their party loathsome for an entire generation. The pro-life cause will be forever associated with moral hypocrisy on an epic scale. The word “evangelical” is already being discredited for an entire generation. Young people and people of color look at the Trump-Moore G.O.P. and they are repulsed, maybe forever.

“What shall it profit a man,” Jesus asked, “if he gain the whole world and suffer the loss of his own soul?” The current Republican Party seems to not understand that question. Donald Trump seems to have made gaining the world at the cost of his soul his entire life’s motto.

It’s amazing that there haven’t been more Republicans like Mitt Romney who have said: “Enough is enough! I can go no further!”

The reason, I guess, is that the rot that has brought us to the brink of Senator Roy Moore began long ago. Starting with Sarah Palin and the spread of Fox News, the G.O.P. traded an ethos of excellence for an ethos of hucksterism.

The Republican Party I grew up with admired excellence. It admired intellectual excellence (Milton Friedman, William F. Buckley), moral excellence (John Paul II, Natan Sharansky) and excellent leaders (James Baker, Jeane Kirkpatrick). Populism abandoned all that — and had to by its very nature. Excellence is hierarchical. Excellence requires work, time, experience and talent. Populism doesn’t believe in hierarchy. Populism doesn’t demand the effort required to understand the best that has been thought and said. Populism celebrates the quick slogan, the impulsive slash, the easy ignorant assertion. Populism is blind to mastery and embraces mediocrity.

Compare the tax cuts of the supply-side era with the tax cuts of today. There were three big cuts in the earlier era: the 1978 capital gains tax cut, the Kemp-Roth tax cut of 1981, and the 1986 tax reform. They were passed with bipartisan support, after a lengthy legislative process. All of them responded to the dominant problem of the moment, which was the stagflation and economic sclerosis. All rested on a body of serious intellectual work.

Liberals now associate supply-side economics with the Laffer Curve, but that was peripheral. Supply-side was based on Say’s Law, that supply creates its own demand. It was based on the idea that if you rearrange incentives for small entrepreneurs you are more likely to get start-ups and more innovation. Those cuts were embraced by Nobel Prize winners and represented an entire social vision, favoring the dispersed entrepreneurs over the concentrated corporate fat cats.

Today’s tax cuts have no bipartisan support. They have no intellectual grounding, no body of supporting evidence. They do not respond to the central crisis of our time. They have no vision of the common good, except that Republican donors should get more money and Democratic donors should have less.