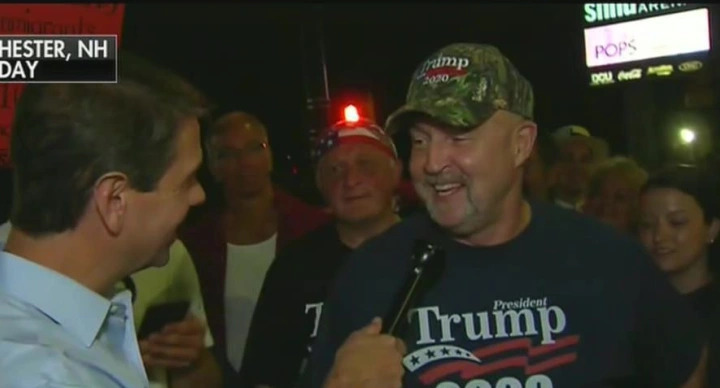 A Trump supporter who President Donald Trump initially believed was a protester disrupting Thursday’s campaign rally in New Hampshire has absolutely no ill will to the president for mocking his physical appearance and saying he has seriously overweight.

Midway through Thursday’s rally, the president reacted to protesters interrupting his speech by pointing to one and shouting: “That guy has got a serious weight problem. Go home, get some exercise!”

As it turns out, the man he mocked is actually a rabid supporter of his. Speaking to Fox News’ Griff Jenkins after the rally, Frank Dawson explained that the president was definitely speaking about him during that moment.

“He was because he didn’t see me rip the signs away from those three people sitting near us,” Dawson told Jenkins. “They were trying to cause a ruckus and they jumped up and started yelling I don’t care what they were yelling.”

Dawson added: “It wasn’t going to happen besides me I’m trying to listen to my president. I think he thought I was part of it, but I wasn’t, I was the good part of it.”

After Jenkins brought up that the president ridiculed his weight, the Trump fan brushed it off while heaping praise on Trump.

“Everything is good,” Dawson exclaimed. “I love the guy. He is the best thing that ever happened to this country.”

The protest at the rally, meanwhile, was by a group of young American Jews from the organization IfThisNow, who held up signs that read “Trump Is #BadForTheJews,” ”Jews Against White Nationalism,” “Jews Against Occupation” and “Your Hate Is Killing Us” while chanting “Jews will not be used.”