It pretty much says it all that there was another Presidential Episode on Tuesday and it was barely a blip on the radar. These spectacles, where the world’s most powerful man rants and raves like a guy with whom you’d studiously avoid eye contact on public transportation, happen so regularly that nobody even much remarks on it anymore. Just a fact of American life. Oh, that’s just the president again! You see, Mr. Good Brain went to Pennsylvania yesterday to give a speech that was purportedly on the topic of energy, but which swiftly devolved into a festival of personal grievance and kaleidoscopic delusion. So the usual.

Thanks to CNN’s Daniel Dale, we know the president said he’s set to lose $5 billion because of lawsuits against him, an amount of money he almost certainly does not have. He demanded that Barack Obama’s book deal be investigated, because reasons. He said China does not have oil and gas—no need to look that one up—and that we’d be begging China for steel (he used a whiny voice) if he hadn’t saved the American steel industry, which would be dead without him. He said the only thing we export to Japan is wheat, which they buy out of pity, all of which is entirely made up and totally bizarre. He used a racist slur to refer to a presidential candidate. He mocked the idea of computer manufacturing, suggesting people want to dig coal or make steel. He invited the workers in attendance to troll the media with tweets about how he should serve a third or fourth term. He talked about copper theft. He talked about how he’s always loved trucks. 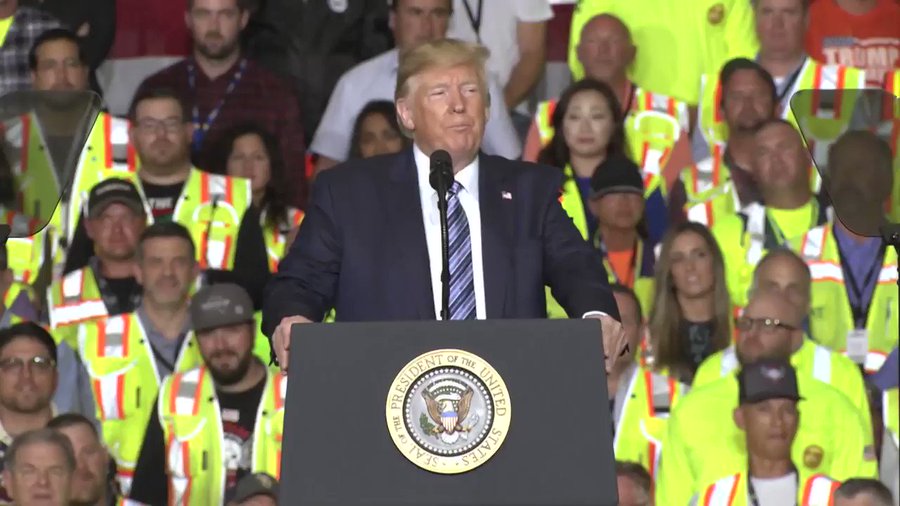 The brain, it is good. It was even gooder when he expressed amazement at the turnout for an 11 o’clock speech when it was, in fact, 2:40 p.m.

But the really reassuring stuff came via the insane lying. As a champion bullshitter, Donald Trump is quite adept at convincing himself of something as he makes it up with the intent of convincing others. The truth is whatever you can get enough people to believe, including yourself. And it appears that the president has thoroughly convinced himself that he is responsible for a program that was signed into law in 2014.

Also from Daniel Dale: “I got it approved. Veterans Choice,” Trump says, for more than the 80th time, of the program signed into law by Obama in 2014.

As a refresher, Trump was not president in 2014. His political career was primarily contained to suggesting the first black president was actually Kenyan, and thus illegitimate. (Not a racist bone in his body, etc. etc.) But the really astounding thing is he’s told this lie 80 (eighty!) times and shows no sign of slowing down. He is an unstoppable force of fabrication, and The Lamestream Liberal Fake News Media has not exactly proven itself to be an immovable object. At some point, he says the same false thing so many times that people just give up.

More than the specific lies, though, the establishment media has fought like hell to pretend that Donald Trump is merely an exceptionally rude and eccentric president, rather than someone who is quite clearly unstable and who poses grave danger to the republic. The President of the United States regularly claims that windmills cause cancer, and some in the press just shrug. They ask him about North Korea’s nuclear escalation after his supposed Artful Dealmaking with the regime, and he rants about the Beautiful, Three-Page Letter that Kim Jong-un sent him. Meanwhile, they keep firing off rockets.

This is insanity. It’s not Biased for the media to say so, it’s fucking reality. Even the Mooch is saying it. Remember that guy?  That was crazy, too. Jesus.