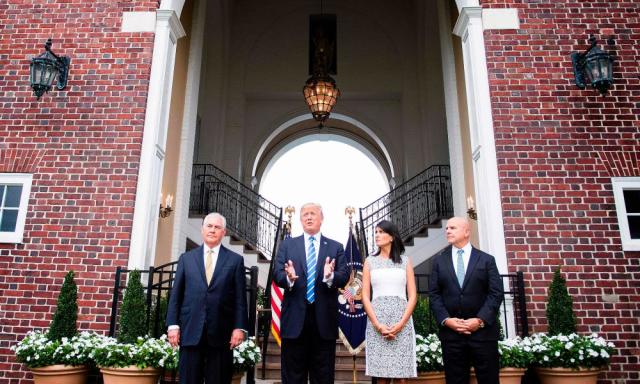 Donald Trump repeatedly raised the possibility of invading Venezuela in talks with his top aides at the White House, according to a new report.

Trump brought up the subject of an invasion in public in August last year, saying: “We have many options for Venezuela, including a possible military option, if necessary.” But the president’s musings about the possibility of a US invasion were more extensive and persistent than that public declaration, according to the Associated Press.

The previous day Trump reportedly took his top officials by surprise in an Oval Office meeting, asking why the US could not intervene to remove the government of Nicolás Maduro on the grounds that Venezuela’s political and economic unraveling represented a threat to the region.

Quoting an unnamed senior administration official, the AP report said the suggestion stunned those present at the meeting, which included the then national security adviser, HR McMaster, and secretary of state, Rex Tillerson. Both have since left the administration.

The administration officials are said to have taken turns in trying to talk him out of the idea, pointing out that any such military action would alienate Latin American allies who had supported the US policy of punitive sanctions on the Maduro regime.

Their arguments do not seem to have dissuaded the president.

A grim-faced Tillerson stood alongside Trump the next day at his New Jersey golf course at Bedminster as the president warmed to his theme.

“We have many options for Venezuela, this is our neighbor,” Trump said.

The White House announced later it had refused to take a call from Maduro. The Venezuelan defense minister, Vladimir Padrino, described Trump’s threat as an “act of craziness” and “supreme extremism”.

In the weeks that followed, Trump remained preoccupied with the idea of an invasion, according to AP. Shortly after the Bedminister remarks, he raised the issue with the Colombian president, Juan Manuel Santos, and then brought it up again at that year’s UN general assembly in September, at a private dinner with allied Latin American states.

At that dinner, Trump made clear he was ignoring the advice of his aides.

“My staff told me not to say this,” Trump said and then asked the other leaders at the table in turn, if they were sure they didn’t want a military solution.

McMaster finally succeeding in persuading Trump of the dangers of an invasion, the report said, and the president’s interest in the notion subsided.

Trump’s approach to military intervention has been erratic. He has been insistent on bringing troops back from Syria, and his administration is pushing to draw down troops in Europe. But Venezuela is not the only country he has threatened directly. Last year, he warned North Korea of impending “fire and fury” and total destruction if the country threatened the US with its nuclear weapons and missiles. After his summit with Kim Jong-un last month in Singapore, however, Trump presented military conflict as unthinkable, pointing out it would cost millions of lives.