An Arizona mother has taken to the web to encourage other parents to teach their kids about differences after her son was ridiculed at church.

Stacey Gagnon said she and her husband, along with their six kids — four of whom have special needs and were adopted — attended a new church last Sunday in Camp Verde, Arizona.

As she and her three youngest children walked into the separate children’s church, where she was dropping the kids off, “the room became silent and every child stared or pointed at my son, Joel,” Gagnon wrote in a Facebook post that has gone viral.

Gagnon, 41, adopted Joel when he was 18 months old. He has been diagnosed with Goldenhar syndrome, a congenital birth defect that affects the development of the face and other parts of the body. Joel was born without a right ear and a right rib, his mother said.

Other than that, “he’s just like a normal boy,” Gagnon added.

After the incident, Gagnon went on Facebook, saying, “I know he looks different, but today hurt.”

Although Gagnon, a former school teacher, has usually educated children on the value of differences when similar scenarios occurred in the past, she said that last Sunday she simply tended to her upset son.

“I held him in my arms during church and he drew ‘Joel loves Mom’ on my palm,” she began. “I have always stepped into the role of teacher to educate kids… but today I did not. Today, I did not teach someone else’s kid, because I was too busy holding my broken-hearted son.” 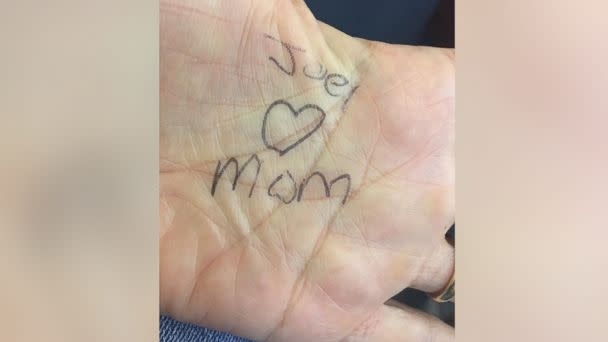 Gagnon said she hopes her emotional post, which has been shared more than 20,000 times, will encourage other parents to teach their children about differences.

“These weren’t bad kids,” she said, referring to the children in church that day. “But we have to be intentional about teaching kids about this. Kids fear things that look different, but when you just explain it, it’s not a big deal.”

Gagnon, who taught second and third grade and is now a nurse for special needs children, said one of the most important thing parents can teach their kids is compassion.

“And empathy,” she added. “It doesn’t just happen because they see you do it.”

As for Joel, Gagnon said he recovered quickly and had an enjoyable time when the family went out to lunch after church.