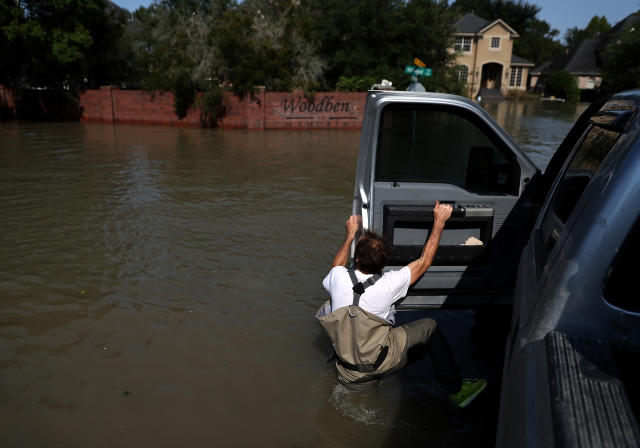 Hurricane Harvey—a Category 4 storm—made history as it pummeled Texas leaving behind extensive damage and more than 40 inches of rain. The catastrophic floodwaters are potentially carrying many harms, including bacteria, human waste, and deadly chemicals. To understand exactly what may be lingering in the water, employees at the Environmental Protection Agency’s Region 6 Lab in Houston are conducting water tests. But now that lab, which is expected to play a key role in the extensive recovery efforts, may be closing, the Houston Chronicle reports.

When the lease ends in 2020, the 41,000 square foot space that employs about 50 people is expected to shut down and it’s unknown what will happen next, officials of the American Federation of Government Employees (AFGE) told the Houston Chronicle.

Environmentalist and labor union groups protested at a news conference on Wednesday in Washington, D.C. about the Trump administration’s pending decision to cut EPA funding by millions of dollars. The groups cited the important work that the chemists, biologists, and other lab employees are doing regarding Hurricane Harvey. Additionally, they stated that if the Houston lab closed, testing water and soil will be much more complicated, considering the next closest EPA regional lab is located in Oklahoma, 400 miles from Houston. In addition to the Houston-area, the lab also covers other parts of Texas, New Mexico, Oklahoma, Arkansas and Louisiana.

Houston EPA lab set to close. Some say the lab’s closure is among harmful impacts of the Trump administration’s drive to slice staff and mission in the agency.   houstonchronicle.com

At the news conference, John O’Grady, who works with AFGE representing EPA employees, voiced his concerns about the potential closing.

“We have a laboratory in Houston that is state of the art and is situated directly in an industrial petrochemical complex. And that laboratory is slated for closure. Why? How much money are we going to save with that?” he questioned.

In April the employees were told the building’s lease would not be renewed, Clovis Steib, the president of the American Federation of Government Employees local 1003, told CNN. Employees are still left in the dark about future plans, leaving many worried if they will have a job come 2020.

As the end of the lease gets closer in sight, “the folks in the Houston lab are in limbo; they’re waiting for the shoe to drop. It’s like being on death row,” Steib said.

The scientists at the lab play an important role in ensuring the safety of the millions of people displaced by Harvey, he explained.

“They will be a part of determining when it is safe for storm victims to return to the area, especially neighborhoods near toxic chemical plants and contaminated Superfund sites,” Steib said.

Water testing, organized by The New York Times, found concerning results of what’s lingering in it, including one area in Houston with fecal contamination that’s at a level more than four times considered safe. In the living room of one family’s home, the tests revealed the standing water had E.coli levels 135 times above a safe level. In the kitchen, there was also high levels of lead and arsenic, The Times reported.