Fish Fraud is Real. What Should we Eat?

After a recent investigation into fish seller Sea to Table revealed some questionable practices, author Paul Greenberg asks what the hell do we do now if we want to eat local fish? 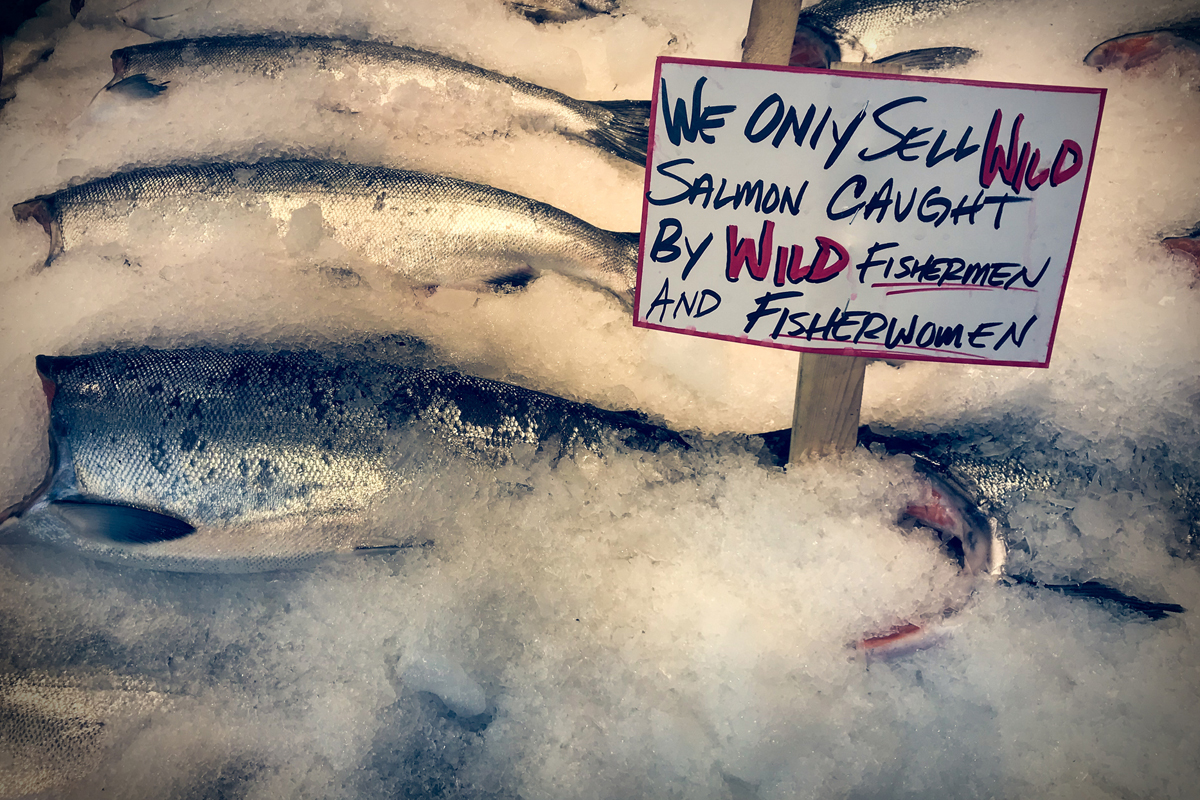 There was a time in my life, not too long ago, when the only fish I ate were the fish I caught myself. Sportfishing was my passion. Back then, I’d have sooner driven a Hummer than bought a slab of commercially caught tuna. I ended up writing a book that encapsulated much of my thinking on the subject called Four Fish. It was then that I first met Sean Dimin.

At a reading of the book at a now-defunct bookstore in Brooklyn, Dimin introduced himself and told me he had come to hear me talk because he and his father had recently founded a small seafood company whose mission was to help save the sea, oddly enough, by fishing. The business was called Sea to Table, and their plan was to buy fish from actual fishermen and sell it directly to actual fish eaters. Simplicity incarnate.

If they could make it work, they would offer an alternative to a seafood distribution system in which a fish usually changes hands at least seven times between leaving the water and hitting the frying pan. I liked the idea. I believed then and still believe that shortening the seafood supply chain could help people who really want to know where their seafood comes from as much as it could help people who really wanted to catch fish sustainably and earn a decent living in the process.

Earlier this month, eight years after my first encounter with Dimin, the Associated Press published a months-long investigation that links Sea to Table to seafood fraud stretching from Brooklyn to Micronesia. In the worst examples of the exposé, AP exhaustively documented a switcheroo in which foreign tuna of dubious origin was mislabeled and passed off to consumers as locally and sustainably caught. If the evidence is as rock-solid as it appears, it could mean the end of the Dimins’ business and a black mark on the quest to relocalize our seafood supply.

A little global context on the crazy, mixed-up world of the American fish market is in order before I continue.

Sea to Table was launched as part of a reaction against much larger economic forces. In the postwar years, America became increasingly enmeshed in the murky global seafood market. From the 1980s to the present, fish markets and individual fishmongers went from controlling 65 percent of the seafood trade to holding on to just 11 percent. Supermarkets, meanwhile, went from selling 16 percent of our seafood to selling 86 percent. Today, even though the United States controls more ocean than any country on earth, as much as 90 percent of the fish we eat is imported.

The Rise of “Local” Seafood

Because of the endless trans-shipping of fish flesh from small vessels to freezer ships to processing plants, back and forth across huge swaths of water, it is common for an American fish to be caught in the U.S,, frozen whole, and sent to China, where it is defrosted, boned, refrozen, and sent back to the states double frozen. Triple and quadruple freezing also occurs. It gets even worse from a moral standpoint. A large portion of the fish that we import, often tuna, is caught illegally, sometimes using the labor of slaves.

All this prompted me to write a second seafood book called American Catch: The Fight for Our Local Seafood. As that book went to press, a new kind of business called a “community-supported fishery” started emerging. Many of these new entrepreneurs wanted to tell me their stories. There was Real Good Fish out in Monterey, California, offering salmon and rockfish. There was Walking Fish in North Carolina, selling black drum and sheepshead. Port Clyde Fresh Catch in Maine had pollock and haddock. Dock to Dish in Montauk had porgy and butterfish.

By the time American Catch went to paperback, there were dozens of these fledgling endeavors. Each of them was trying to do the same very difficult thing: chart a course around the foreign seafood pouring into the country and resist the lowballing from seafood-buying middlemen that left fishermen with dockside prices, often below $1 per pound.

I was won over by these stories. I started regularly buying seafood instead of catching it.

The struggle caught the public’s attention, too. Increasingly I found myself writing about the plight of community-supported fisheries and organizing events on their behalf. And all along the way, Sea to Table kept showing up. The company bought dozens of copies of American Catch and distributed them to its customers.

When I wanted to help Manhattan’s New Amsterdam Market stage a pop-up festival of locally caught New York fish on the grounds of the old Fulton Fish Market, the Dimins showed up with plenty of every kind of seafood you could hope to eat. When Yale, Ohio State, and the University of Massachusetts wanted to relocalize their cafeterias, Sea to Table was there to help. When the Monterey Bay Aquarium, the nation’s leader in rating sustainable seafood, needed Alaska salmon for an event, the Dimins had pounds and pounds of it.

But at a certain point, small-scale fishermen, the kind of fishermen Sea to Table was encouraging, started grumbling that the company was not operating as it appeared. Why were “Montauk tuna” on Sea to Table’s list of products in the dead of winter, when Montauk Harbor was frozen and nary a tuna boat was heading out to fish? Why were Maryland blue crabs on the company’s docket in January, when the Maryland blue crab season had ended? These questions bugged me. And the complaints continued. By the time the Associated Press interviewed me for its investigation, it started to seem that the Sea to Table case study was not always holding water.

Now, after having read the full AP story, I have many questions. If what is reported turns out to be true, at what point did Sea to Table’s apparent reality veer away from its story? Did the company start out with an intent to defraud its customers, or was the intermingling of foreign tuna with locally caught fish just plain sloppy? Did it falsify the names of fishing vessels that caught supposedly local fish, as AP documented, or was it a repeated clerical error? Are the Dimins at heart good people who got confused, or did they become what they beheld because they realized that what they beheld might be the only way to make money in the fish business today?

Where Do We Go from Here?

Perhaps the most important question is the question everyone has been asking me for decades — and especially now that the AP story has dropped: What the hell do we do now if we want to eat fish?

Sea to Table has chosen to blame its tuna supplier, Gosman’s of Montauk. In a statement posted to the company’s site, Dimin asserts, “If the reporter’s allegations are accurate, the third party supplier singled out, Gosman’s, would be in clear breach of the spirit and contractual agreement that we have with them. As we further investigate, we have discontinued our working relationship with Gosman’s. The idea that we could be associated — even very loosely — with an organization that engages in poor labor practices is outright horrifying to us.

For the rest of us, the path forward is to learn more and try harder. It’s important to remember that Sea to Table was not a community-supported fishery, a fisherman’s co-op, or any other kind of fisherman-owned business. It was a fish seller that often worked with other fish sellers, like Gosman’s. But there are and there continue to be genuine community-supported fisheries. These organizations do sell directly to consumers, and they do focus exclusively on locally caught seafood. You can find most of them at LocalCatch.org.

In addition, there are supermarket chains that take seafood traceability very seriously. They are rated regularly on their traceability and sustainability systems, and you can see how they compare here.

We should also keep in mind that Sea to Table’s weaknesses are in part based on our weaknesses. The largest source of mislabeling in the Sea to Table portfolio appears to have been tuna. Do we really need to eat tuna as much as we do? In most years, tuna is the most-consumed family of fish in America. Tuna is also the largest source of mercury in the American diet, and much of it is coming from countries that have serious issues with forced labor and food safety. Couldn’t we get to know some other fish instead?

And in league with that question are many others we ought to ask ourselves.

Couldn’t we all become a little more acquainted with our own shores and come to their defense? Couldn’t we offer a word of protest when we hear that yet another commercial fishing port is being converted into a luxury harborside yacht club? Couldn’t we hold our towns and cities accountable when they don’t adequately budget for sewer systems that drain into our fishing grounds? Couldn’t we stand up for local oyster growers when they are boxed out of their home coasts by landowners who don’t want to be bothered by honest people making food?

And failing all that, couldn’t we read up on the regulations, visit a local tackle shop, and maybe one day this summer go out and catch a fish all by ourselves?

That’s my plan anyway. I’ll see you on the water.