Does Scott Pruitt have an ethics problem? 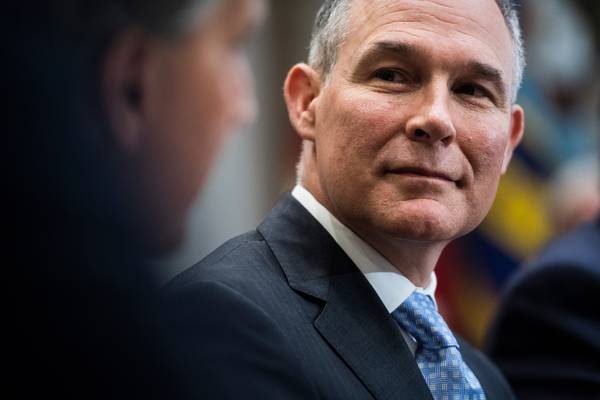 On the morning of April 1, 2017, Environmental Protection Agency appointee Mandy Gunasekara welcomed to her office a team of lobbyists representing the makers of portable generators.

For months, the Portable Generators Manufacturers’ Association had been trying to block federal regulations aimed at making its product less dangerous. The machines — used by many Americans during power outages after severe storms — emit more carbon monoxide than cars and cause about 70 accidental deaths a year.

Just before President Barack Obama left office, the Consumer Product Safety Commission had approved a proposal that would require generators to emit lower levels of the poisonous gas. Now industry lobbyists were warning Gunasekara of “a potential turf battle . . . brewing” between the commission and the EPA, which traditionally regulates air emissions from engines.

The communication between the lobbyists and one of Pruitt’s top policy aides — detailed in emails the agency provided to Democratic Sens. Bill Nelson (Fla.) and Thomas R. Carper (Del.) — open a window on the often close relationship between the EPA’s political appointees and those they regulate. Littered among tens of thousands of emails that have surfaced in recent weeks, largely through a public records lawsuit filed by the Sierra Club, are dozens of requests for regulatory relief by industry players. Many have been granted.

In March 2017, for example, a lobbyist for Waste Management, one of the nation’s largest trash companies, wrote to two top EPA appointees seeking reconsideration of “two climate-related rules” affecting business. (Another lobbyist “sings your praises,” she told the pair.) The EPA subsequently delayed a rule targeting methane emissions from landfills until at least 2020. Less than six weeks later, a representative of the golf industry wrote Samantha Dravis, then-associate EPA administrator for the Office of Policy, that “our guys” had been “amazed at the marked difference between our meeting today and the reception at EPA in years” past. The chief executive of the World Golf Association later sent his own email reminding Dravis of “our specific interest in repeal of the Clean Water Rule” — a rule the agency is now reviewing.

And in June 2017, Michael Formica, a lawyer for the National Pork Producers Council, sent a note “from my SwinePhone” thanking Gunasekara and other senior Pruitt aides “for your efforts to help address the recent air emission reporting issues facing livestock agriculture.” The EPA later revamped its guidelines so that pork, poultry and dairy operations do not have to report on potentially hazardous air pollutants arising from animal waste.

EPA spokesman Jahan Wilcox said many of these groups “were dealing with the costly consequences of President Obama’s policies that expanded federal overreach while doing little for the environment.”

Any rule changes underway, he added in an email, received “robust public comment” and have been developed “consistent with administrative law and the rulemaking process” with the goal of improving the environment.

Others are far less enthusiastic about the EPA’s performance under Pruitt — including what appears to be an “open-door policy towards the industries they are supposed to be regulating,” said Brendan Fischer, director of federal reform at the Campaign Legal Center, a nonpartisan public watchdog group. “As these emails show, when lobbyists ask top EPA officials to jump, the answer is often ‘how high.’ ”

On some occasions, top EPA officials pushed back on the idea that they would automatically grant industry’s requests: In a sharply worded Aug. 21 email, Dravis told a lobbyist from ConocoPhillips that “no one committed” to relaxing a rule on small incinerators at the oil and gas company’s request. Career staff, she added, had raised concerns about the move.

Walke, however, was unimpressed. “Scott Pruitt is at EPA only to serve the interests of polluting industries,” he said when asked about the overture. “A few token meetings with environmental groups cannot hide his destructive agenda.’’

EPA’s shifting stand on portable generators has proven particularly consequential. The Consumer Product Safety Commission had spent years examining whether to impose mandatory emissions requirements, concluding in late 2016 that the industry could not be trusted to lower emissions on its own. After Pruitt intervened, Buerkle announced last August that the commission would explore the voluntary standards being developed by the industry trade association even as rulemaking on the other front technically continued.

“Staff is obligated to proceed,” a spokeswoman for the commission said Sunday.

It is now working with the National Institute of Standards and Technology to evaluate two voluntary standards that would require a generator’s engine to shut off when carbon monoxide levels get too high.

“I don’t think anyone can deny that safer generators will now be produced,” Bracewell senior principal Edward Krenik, who represents the industry, said in an email Sunday. He noted that the shift is happening “voluntarily and without protracted litigation, which would have delayed any change.”

The safety consulting and certification company UL has proposed a more restrictive limit that would require the generators to emit lower levels of carbon monoxide overall — and shut off much sooner.

In May, Buerkle wrote Nelson and Sen. Richard Blumenthal (D-Conn.) to stress how, “thanks to many years of effort by the CPSC staff and generator manufacturers, safer portable generators are coming to market soon.” However, given that older machines remain in use, she wrote, “it is crucial to keep emphasizing the message that portable generators must be kept outdoors and as far from open windows and doors as possible.”

Despite aggressive public-information campaigns by federal and local officials on that point, carbon monoxide poisoning incidents remain a serious problem. The Florida Poison Information Center Network recorded 509 patients last year, compared with 327 in 2016 and 276 in 2015.

After Hurricane Irma, Nelson said in a statement, “at least 12 people died and many more were injured by carbon monoxide poisoning from portable generators in Florida.”

Nelson went on to accuse Buerkle and Pruitt of colluding “with industry and outside lobbyists to actually kill mandatory safety standards. It’s one of the worst examples of the fox guarding the henhouse I have seen, and it’s just shameful.”

Brady Dennis and Andrew Ba Tran contributed to this report.