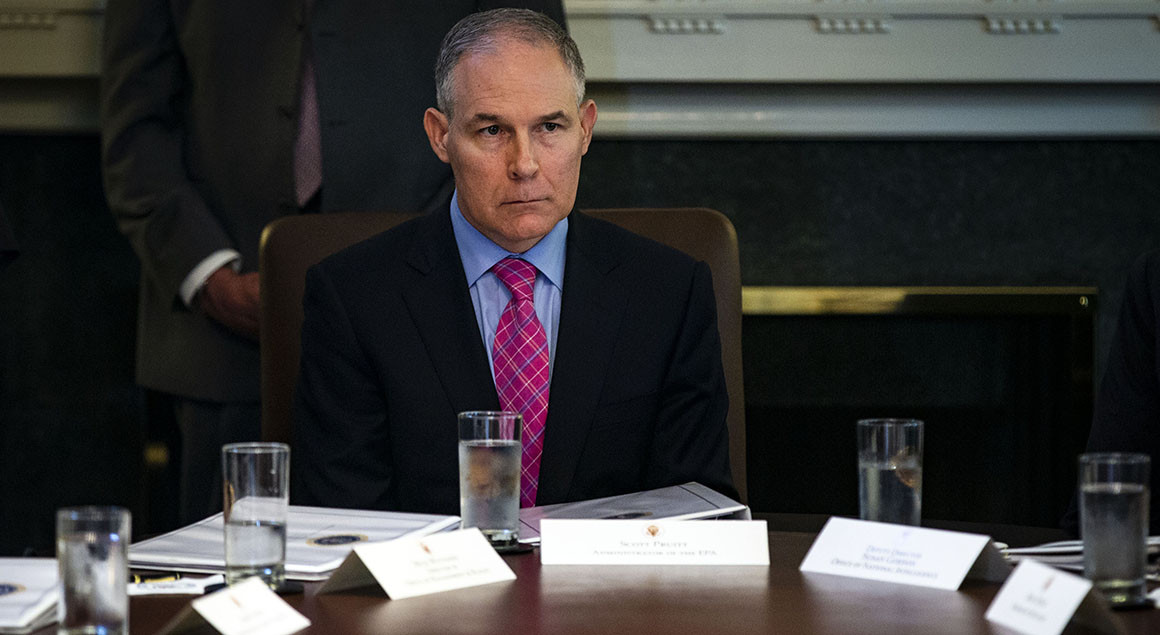 That standoff between the EPA inspector general’s office and Pruitt’s team was resolved a month after the IG’s staff flagged the issue and warned that the reticence to release the documents came close to impeding their probe, the emails show. But the incident highlights early tension between EPA’s political appointees and the internal watchdog, which is now conducting multiple reviews of Pruitt’s actions.

And it shows that concerns about the lack of transparency atop the agency since Pruitt joined have rankled people inside the agency as well as outside. POLITICO reported last week that Pruitt’s political appointees were screening documents produced for public records requests related to the embattled administrator, slowing the release of information.

The new emails, released under a Freedom of Information Act request from California’s Justice Department, show the IG’s office was seeking information for its probe of Pruitt’s frequent travel to Oklahoma on EPA business, enabling him to spend numerous weekends at his home in Tulsa.

That probe was later expanded to look at Pruitt’s other travel practices, including his first-class flights that cost more than $100,000, and it is expected to be completed by this summer. The watchdog has since opened additional probes into Pruitt’s security spending, condo rental, soundproof phone booth, large raises for aides and allegations of retaliation against staff who questioned him.

Kevin Christensen, EPA’s assistant inspector general for audits, wrote in September to a top career official in EPA’s finance office to warn of a “potential situation” with the travel audit just two weeks after it began, the emails show. He flagged messages showing Pruitt’s chief of staff Ryan Jackson was “screening” documents before releasing them to the Office of Inspector General.

“This does not fit the definition of unfettered access or comply with the Administrator memo on access and providing information to the OIG,” Christensen wrote to Jeanne Conklin, EPA’s controller who oversees financial management and reporting. “When we are denied access to information until approved for release, it raises the question as to what is being withheld and approved for release.”

The auditors were able to obtain the documents on Pruitt’s flights from the EPA’s finance office in Cincinnati, even as Pruitt’s staff continued to withhold them, Conklin wrote to Kevin Minoli, a career official who at that time served as EPA’s acting general counsel.

“Do they not understand in the [Office of the Administrator],” Conklin asked Minoli. “Perhaps someone can speak to them and make them understand that the OIG has the documents already and they appear close to impeding the audit.”

Both Minoli and Conklin stated in their email exchange that neither of them advised Pruitt’s staff that they had the power to delay or withhold handing over documents to the OIG.

Minoli said in an email a week later that Jackson had delayed providing the records over concerns the audit might make public some previously redacted information, such as Pruitt’s calendar and flight records. Minoli said he discussed the matter with the deputy inspector general, Chuck Sheehan, and noted the IG’s office “has a long-standing practice of not using privileged information in their published work unless absolutely necessary.”

An EPA spokesman on Wednesday declined to comment on the incident.

In March 2017, the Oklahoma-based National Stripper Well Association told Pruitt it would award him its “Industry Leader Award” at an annual gala, which was sponsored by Koch Industries. The group represents the owners of the hundreds of thousands of small wells that produce less than 15 barrels of oil or 90,000 cubic feet of natural gas per day.

But EPA ethics official Justina Fugh noted in an email to Pruitt’s schedulers, Sydney Hupp and Millan Hupp, that NSWA was registered to lobby the federal government and Pruitt would violate his ethics agreement if he accepted the honor.

The group had praised Pruitt’s decision that month to halt the Obama EPA’s request for oil and gas companies to provide the agency with information about methane emissions, a possible first step toward regulating pollution in those existing wells. “NSWA Got a Win at EPA Already!” touted an early March blog post by the group. It is unclear whether Pruitt’s award was directly connected to that decision.

Fugh warned the Hupps that Pruitt would have to walk a fine line in accepting anything from a lobbying entity. Items with “no other intrinsic value” like a plaque may be OK, she said, but “an ashtray or coffee table book” would not be.

Pruitt’s Outlook calendar, released in response to public records requests, lists the topic of the speaking engagement as “acceptance of award, thank you.”

EPA did not say whether Pruitt officially accepted the award from the group along with the plaque, despite Fugh’s advice.

“We gave the plaque to [the Office of the Executive Secretariat] who confirmed that we could keep it,” EPA spokesman Jahan Wilcox said. NSWA did not say Wednesday why it honored Pruitt.

Pruitt aides hinted to ethics officials last fall that he expected to be invited to increasing numbers of political events, which ethics officials warned raises a host of Hatch Act concerns about mixing political activities with his official duties.

Earlier in his tenure, Pruitt had decided not to attend an Oklahoma GOP fundraiser after reports revealed the event would feature a speech on EPA issues.

Last fall, Ronna McDaniel, the head of the Republican National Committee, invited Pruitt to attend an Oct. 25 fundraiser in Dallas for Trump Victory, a joint fundraising committee that funnels money to the RNC and Trump’s reelection campaign.

“We will get more and more of these” invites as “political season” approaches, Jackson wrote to an ethics official.

Hatch Act restrictions would allow Pruitt to attend, but he would be barred from mentioning his EPA affiliation or asking for donations, Fugh replied. EPA could not cover his travel costs, although the agency could pay for his security detail’s travel, Fugh added. Event organizers could not specifically invite guests with issues before the agency and would need to rescind invitations to anyone with business before EPA.

Pruitt ultimately appears to have skipped that fundraiser.