Can Scott Pruitt Poison the Environment Enough to Save His Job? 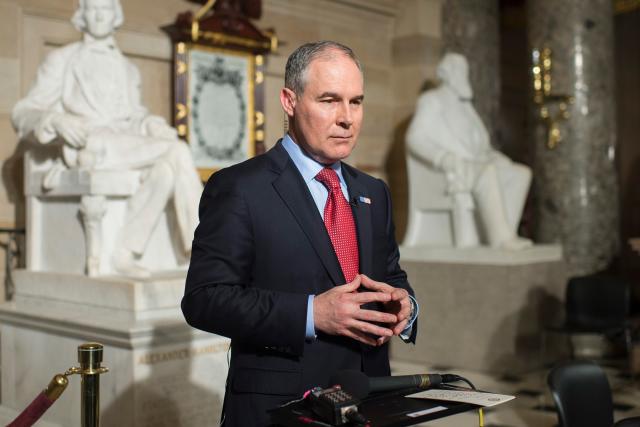 The past couple months have been less than ideal for pollution enthusiast Scott Pruitt. At first, headlines about his expensive (taxpayer-funded) travel habit were mostly indistinguishable from similar scandals plaguing other Trump administration Cabinet members. More recently, however, negative stories about the anti-E.P.A. administrator have been tumbling out of his agency on a near daily basis. In the past week alone, we learned that Pruitt was living in a top lobbyist’s D.C. townhouse for just 50 bucks a night—when similar accommodations would have set him back several multiples of that rate—and just happened to approve a deal for one of his landlord’s water-polluting clients to expand a pipeline project after it had the distinction of receiving the second-biggest fine in the history of the Clean Water Act. On Monday, word leaked to The Washington Post that Pruitt’s staff had considered leasing a $100,000-a-month private jet to accommodate his luxe “travel needs”; on Tuesday, sources whispered to The Atlantic that Pruitt had bypassed the White House to give substantial pay raises to two of his closest aides.

Up until recently, it appeared that Pruitt’s job, if not safe, was at least as secure as anyone else’s in an administration in which casual corruption is a venial sin and job security hinges on the whim of a mostly unhinged president. By Wednesday, however, the White House’s stance on the Pruitt Situation seemed to have shifted markedly. For the first time, spokeswoman Sarah Huckabee Sanders said publicly that “The president’s not” O.K. with the E.P.A. chief‘s actions. She also declined to confirm reports that Trump rang up Pruitt in recent days to offer support. “We’re reviewing the situation. When we have had the chance to have a deeper dive on it we’ll let you know the outcomes of that,” Sanders added. “But we’re currently reviewing that here at the White House.” To those familiar with the roundabout way that Donald Trump slowly exfoliates aides who become irritants, the chilly response looked like a kiss of death.

Perhaps recognizing the gravity of his situation, Pruitt attempted to control the damage Wednesday, with mixed results. “I’m dumbfounded that that’s controversial,” he told the Washington Examiner, referring to his lobbyist-sponsored living situation. Asked by Fox News if the arrangement contradicted Trump’s pledge to “drain the swamp,” Pruitt acted shocked: “I don’t think that that’s even remotely fair to ask that question.” In other interviews, he suggested that the leaks are part of a liberal plot against him, with his enemies willing to “resort to anything” to stop him from deconstructing Obama’s environmental regulatory regime. Speaking to The Washington Times, Pruitt said he was under attack by a “bastion of liberalism,” which apparently forced him to sign a rental agreement that virtually anyone could’ve told him was ethically problematic at best. In Axios, an unnamed Pruitt defender appeared to channel his view of the world, telling the outlet that “this is really about ideology, driven by folks on the left who don’t like” his agenda, and that the bad press is allegedly coming from a recently dismissed political appointee. (That person, when contacted by Politico, denied the accusations and suggested that the E.P.A. is trying to deflect attention by attacking people who have questioned Pruitt’s decisions.)

Over at the White House, Chief of Staff John Kelly is said to be extremely miffed he wasn’t warned in advance that Trump’s E.P.A. head was a ticking time bomb, telling Pruitt in a phone call that “the flow of negative and damning stories needed to stop.” “[It] was not a friendly buck-up call at all,” is how one administration official described the chat to the Daily Beast. Yet for all the major lapses in judgment—practically a job requirement for Trump staffers, given their track record—Pruitt still has one thing going for him: he’s been the most “effective” member of Trump’s Cabinet, which in this case means he’s proven especially adept at gutting the agency he was tasked with running 14 months back. Trump may not appreciate the negative attention Pruitt is getting—and he certainly hates the positive attention, such as a New York Times headline last month, “Scott Pruitt, Trump’s Rule-Cutting E.P.A. Chief, Plots His Political Future”—but he loves what Pruitt has done for his industry pals. “As long as [Trump] feels Pruitt is effective and on his side, he’s probably fine,” one source close to the administration told the Daily Beast.

Pruitt, for his part, made sure to lay things on particularly thick while announcing the rollback of Obama’s car emissions rules this week. “This president has shown tremendous courage to say to the American people that America is going to be put first,” he said at the gathering. With the rollbacks, Pruitt added, “the president is again saying America is going to be put first.” Time will tell whether Pruitt is still around by the time those rules go into effect.