Anthony Reyes: Building Dignity for the Homeless Through Farming

The farm manager at the Homeless Garden Project in Santa Cruz, Reyes approaches agricultural systems from a justice lens. 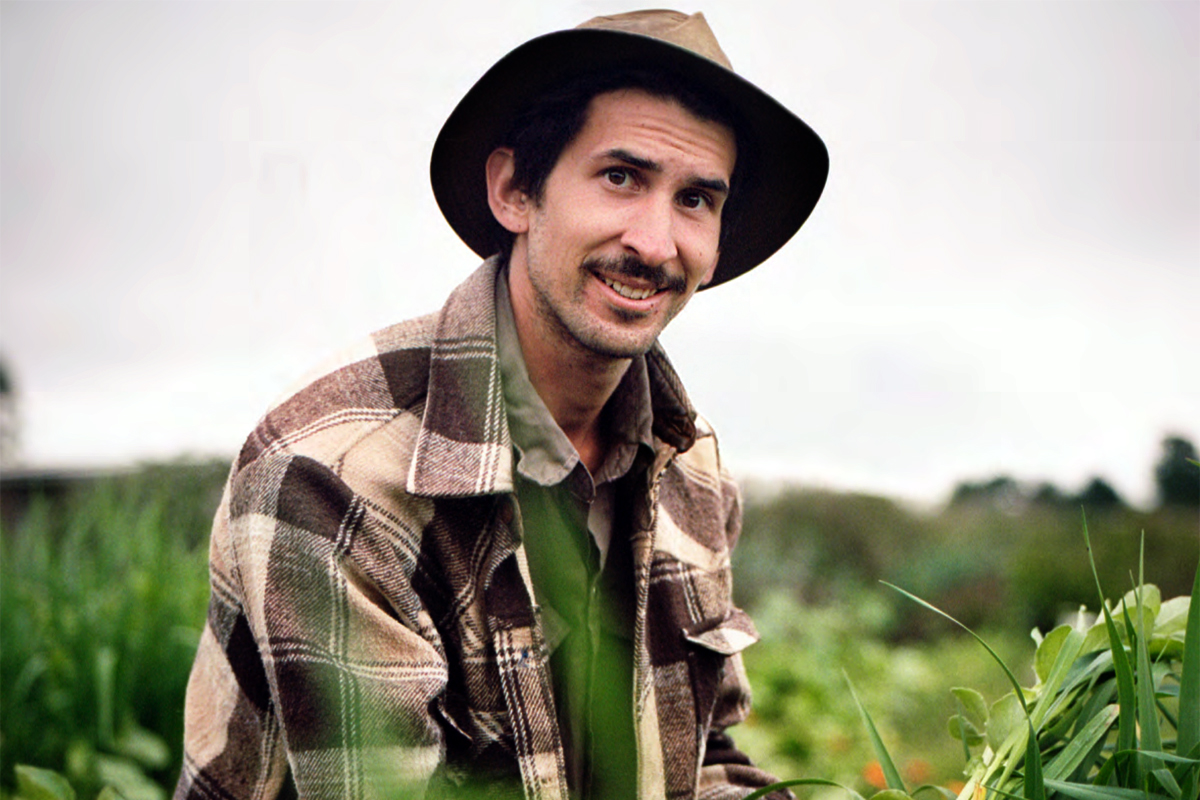 Anthony Reyes found his calling working at the intersection of farming and social justice with organizations such as the Tilth Alliance in Seattle, the youth education program Common Threads Farm in Bellingham, and now with the Homeless Garden Project in Santa Cruz. Reyes credits his college days at the University of California, Santa Cruz, for his passion for sustainable agriculture with a food justice focus. Reyes, a biracial Millennial with Mexican-American roots, always wanted to return to the area, a hub for farming with a mission. In 2017, he returned to the community where he first learned to grow food and view agricultural systems through a justice lens.

In his first year at the Homeless Garden Project, Anthony Reyes says he was asked about every stereotype imaginable when working with this marginalized population. Chief among them: Do homeless people really work? There’s a lot of stigma associated with this population, he says. “For the record, the crews here are some of the most hardworking people I’ve ever met,” says Reyes of the participants in the non-profit’s year-long employment-training program at Natural Bridges Farm.

The project serves people in Santa Cruz County who are homeless or formerly homeless, who have experienced barriers to employment, and who want to maintain a stable productive place in society. “The crew tackles every task seriously with passion and heart.”

Reyes spends his days on the farm bouncing between different posts—whether the field, greenhouse, farm stand, or kitchen—helping crews with their tasks on the 3.5-acre farm, which grows row crops and flowers. He’s also in charge of the organization’s three-pronged Community Supported Agriculture program. CSAs, an alternative marketing model that features a direct relationship between farmer and consumer, accounts for about 10 percent of the 25-year-old institution’s income.

The program includes a traditional CSA, a U-pick version, and a scholarship fund, where people can donate to a CSA program for 10 local organizations serving the needy. Flowers go to a local hospice program and the program includes a value-added enterprise making and selling jams, dried herbs, and floral wreaths, which are sold at their downtown store, in a new shop in nearby Capitola, and online.

Relationships are central to Reyes’s job, he says, and inform every aspect of work on the farm, which is slated to expand to a 9-acre permanent site expected to be fully operational in 2020. The 28-year-old strives to treat each crew member with care, compassion, and respect. He says he learns as much from his 17-member crew as they learn from him. “Every single day they inspire me. The farm itself is such a place of radical inclusivity. Everyone is embraced and welcomed,” he says. “And that is reflected in the pride people take in the work and the collaboration on the farm. It’s really a beautiful thing to witness on a day-to-day basis.”

Reyes has farming in his blood: Wisconsin dairy farmers make up his mother’s side of the family. His father is of Mexican heritage and his paternal grandfather ran a “mow and blow” business in Los Angeles. The smell of grass and a four-stroke engine is embedded in childhood memories, he says, and he looked up to his grandfather, a gentle soul. In college, Reyes says his studies helped him begin to see agriculture and outside work though a social justice lens. A key mentor on campus: a UC Santa Cruz lead groundskeeper whom he worked with, Jose Sanchez. 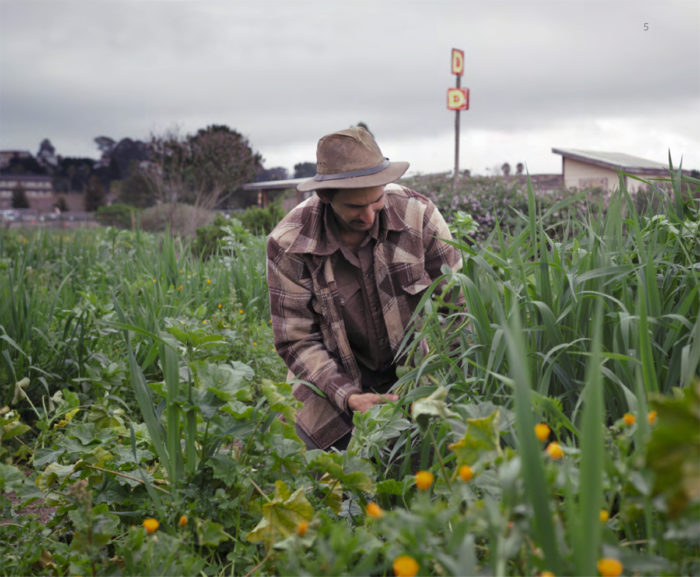 His “juiciest” days, Reyes says, are whenever he can get his hands in the earth. “I make some of the deepest connections with our crew members simply working alongside them,” he says. “Working the soil creates a safe space for people to be seen and heard for who they are.”

Reyes has seen first-hand what a difference growing food can make in someone’s life. “There’s something very restorative and transformative about planting a seed and watering it and watching it grow into a flourishing plant that can provide sustenance,” he says. “From a little speck in your hand to the harvest for your lunch: That has a calming, therapeutic effect.”

Crew members see the fruits of their labor and the value that it brings. “There are very real, tangible benefits at the end of the day, whether someone has spent it building a bed, weeding, or picking. You can see the difference you’ve made,” says Reyes. “There’s ownership and a sense of accomplishment.”

As Reyes points out, homelessness and joblessness go hand in hand. Lack of job skills, a spotty work history, an absent social support network, and low self-esteem can all make the transition out of homelessness more difficult. The Homeless Garden Project’s program is designed to address these concerns, in addition to the challenges that come with substance abuse, mental health issues, physical or developmental disability, and the unique problems faced by veterans—all obstacles that disproportionately impact the homeless community.

Housing is one of the most immediate problems. Some of the Homeless Garden Project’s clientele live in shelters, while others camp outside or in cars, or reside in tenuous subsidized housing situations. A team of social work interns help garden crew members find stable employment and housing. The interns also help the crew find resources to address other obstacles like transportation, substance abuse, and mental health problems. 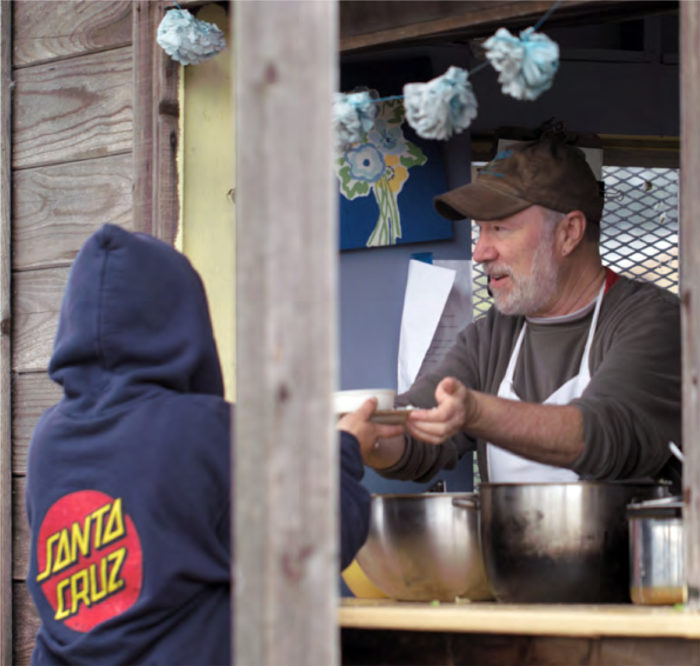 “Every single person on the crew has personal challenges they’re trying to work through. We very much meet people where they are,” says Reyes. In a region known for exorbitant rents and real estate, Reyes is well aware that many residents of the greater community—including some farm project volunteers—are just a paycheck or two away from homelessness themselves.

Measuring success comes in multiple ways. More than 90 percent of participants in the program find stable housing and employment at the end of their garden project tenure. There’s also the less quantifiable personal growth that Reyes observes in his crews over time: “I watch people try new things and come out of their shell.”

His own on-the-job goals? “I remind myself constantly to show up, and what it means to be present. I’ve learned so much about myself in this line of work,” he says. “It’s also given me more confidence and allowed me to be okay with, and find strength in, vulnerability. It’s not just me. Every single person who steps onto the farm is changed by it.”

Reprinted with permission from Hungry for Change, a publication of the Berkeley Food Institute. Read about other California emerging food systems changemakers here.

Aviva Paley is Cooking Up Second Chances with Kitchens for Good

For the Homeless, There’s More to Eating than Food

How Food Helps Homeless People Get Back on Their Feet