The Canadian trucker protest is in its second week. This is how we got here

Ottawa (CNN)A massive protest by Canadian truckers and others against Covid-19 mandates has entered a second week, crippling downtown Ottawa with no end in sight. The city’s mayor has declared a state of emergency, and the capital’s police chief is calling for outside help to deal with the protesters.So what exactly are the demonstrations about, and what’s being done to address them? Why are the protests taking place now?

Here are some key questions and answers about Canada’s Covid-19 protests.

What are truckers protesting in Canada?

Thousands of Canadian truckers are participating in the so-called Freedom Convoy, fighting a vaccine mandate that is forcing all Canadian truckers crossing the US-Canada border to be fully vaccinated or face quarantine in their homes for two weeks when they return.

The new rule went into effect in mid-January in Canada and January 22 in the United States. The US Department of Homeland Security now requires non-citizens entering the United States via border crossings or ferry terminals along the US northern and southern borders be fully vaccinated against Covid-19. 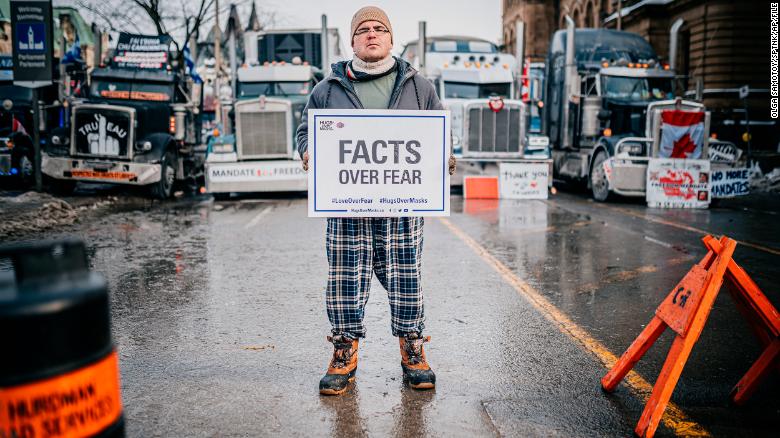 A man takes part in the Freedom Convoy protest over Canadian Covid-19 restrictions in Ottawa on February 2.Before this mandate, truckers were exempted from the vaccine requirement and permitted to cross the border, at times testing for Covid-19, even during the 18-month period that the border was closed to non-essential traffic. Truckers were considered vital to keeping supply chains functioning normally.

According to the Canadian government, nearly 90% of Canada’s truckers are fully vaccinated and eligible to cross the border. Canadian Prime Minister Justin Trudeau said the protesting truckers represent a “small, fringe minority” and his government did not expect the vaccine mandate to significantly affect supply chains.

How did the protests start?

The “Freedom Convoy” of truckers began its protest in January in Canada’s western provinces with the goal of reaching the nation’s capital, Ottawa, and continuing the protest until the vaccine mandate was lifted. 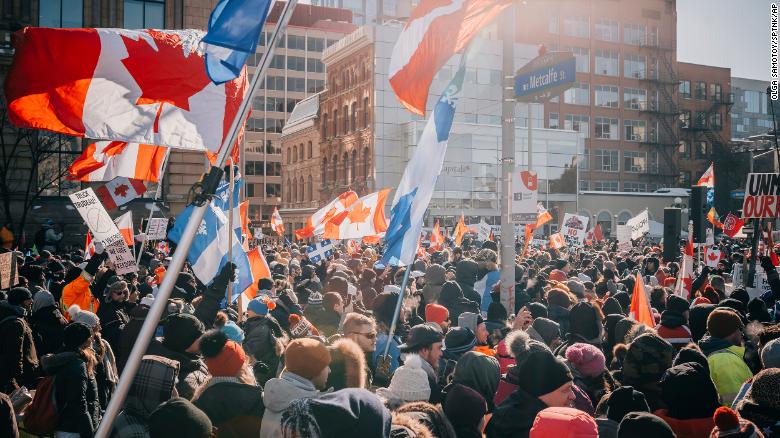 People protest Covid-19 vaccine mandates in Ottawa on February 5.On its cross-country journey and now in Ottawa, the protest has attracted support from thousands of Canadians, even some who are fully vaccinated, who say they want all vaccine and mask mandates lifted and all Covid-19 health restrictions dropped.

How have the protests evolved?

A large, noisy convoy, including hundreds of trucks and vehicles, descended on Ottawa on January 29. Dozens of trucks remain in Ottawa’s downtown core in what local officials have described as an “occupation.” This past weekend, several cities and towns joined in the protest with hundreds of trucks and thousands of protesters in some of Canada’s largest cities.

While most of the demonstrations outside Ottawa have ended, some protesters in those cities promise to return every weekend until health restrictions are lifted.The protest in Ottawa continues despite Ottawa’s police chief saying the demonstration is now “unlawful.”

What do the protesters want?

In a statement released last week, organizers of the Freedom Convoy said they will remain in Ottawa “for as long as it takes for governments across Canada to end all mandates” associated with Covid-19.Protesters CNN has spoken with also say they would like Canadian Prime Minister Justin Trudeau to speak with them and hear their opposition to the mandates and restrictions.Trudeau has said he has no intention of meeting with them, and that they hold views “unacceptable” to most Canadians. 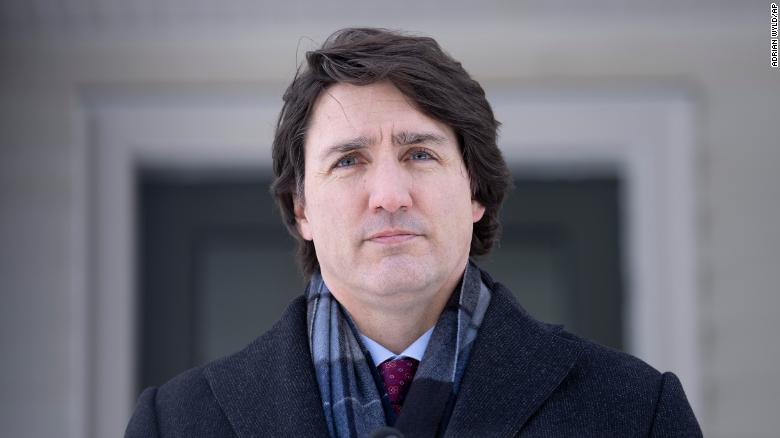 Canadian Prime Minister Justin Trudeau listens to a question at a media availability on Monday, January 31.

What has the impact been on Canadians?

The most profound impact has been in Ottawa’s downtown core, where the convoy of trucks has blockaded several downtown streets, honking their horns in some cases day and night.Residents and service providers in the downtown core told CNN they feel like hostages in a city under siege. The majority of businesses in the area have been forced to close; they include a large mall adjacent to the protest site. 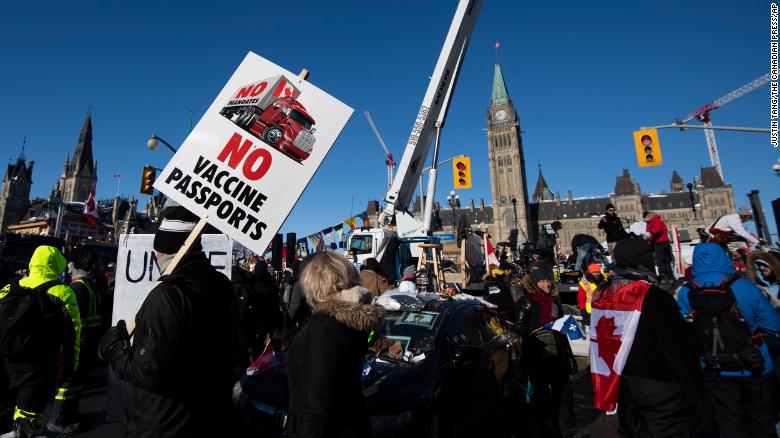 People hold signs and wave flags along Wellington Street in front of Parliament Hill on February 5 as part of the Freedom Convoy protest.Ottawa police say they opened a hate-incident hotline that has received more than 200 calls in a matter of days, with residents reporting incidents of harassment and intimidation.To date, Ottawa police say, they have initiated more than 60 criminal investigations related to the demonstration. They are primarily for mischief, thefts, hate crimes and property damage, they say.Hundreds of traffic and parking tickets have also been issued, as well as dozens of fines for bylaw infractions.

What has PM Justin Trudeau said about all this?

Trudeau says the protesters do not represent the vast majority of Canadians who have opted to be fully vaccinated and believe that public health restrictions save lives.At a news conference last week, he indicated that while there are no formal requests for military help — despite Ottawa’s police chief saying it may take the military’s help to end the protest — the military option was not “in the cards right now.””One has to be very, very cautious before deploying military forces in situations engaging Canadians. It is not something that anyone should enter in lightly,” Trudeau said.A spokesman for Canadian Defense Minister Anita Anand also told CNN last week that “the Canadian Armed Forces are not involved in law enforcement in this situation,” adding that the military is not a police force.

81% of Canadians are vaccinated. Why so much angst now?

According to the Public Health Agency of Canada, more than four of every five Canadians are vaccinated. However, provincial governments and the federal government have enforced various vaccine mandates.

At the federal and provincial level, Canada has enforced some of the strictest Covid-19 measures in the world with widespread mask mandates and restrictions on the size of gatherings, not only at large events and restaurants, but in private homes.

A vocal minority of Canadians says they agree with the truckers’ protest, saying is it time to drop most Covid-19 restrictions. With so many Canadians complying for so long with vaccine and mask mandates and other Covid-19 measures, some say public health officials and government leaders are now going too far.As one couple who said they were fully vaccinated told CNN, they feel they did their part and now they want to move on.

Had Canadians staged serious protests over Covid-19 rules before this?

Various smaller protests took place across the country against health measures and mandates in 2020 and 2021. However, this is the largest and most widespread protest of its kind to date during the pandemic.

What Covid-19 restrictions are in place now for Canadians who are not truckers?

Several provinces are beginning to drop some health measures and allow the reopening of restaurant dining rooms, theaters, cinemas and gyms, albeit with capacity restrictions.

Decisions about most of these health restrictions and how and when to ease them are determined not by the Trudeau government, but by individual provinces.

There is still a federal vaccine mandate for passengers traveling by air domestically or internationally. In addition, all federal public servants are required to be fully vaccinated as a condition of employment.

Traveling to Canada during Covid-19: What you need to know before you go