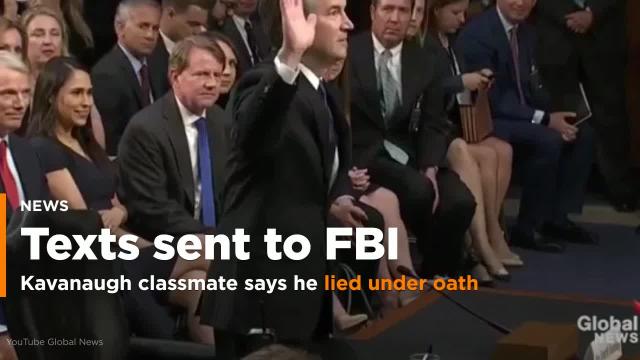 As the FBI marches forward with its investigation into allegations of sexual misconduct made against Supreme Court nominee Brett Kavanaugh, a growing cohort of the judge’s former classmates are coming forward with contradictory memories of how the man behaved in his youth.

Mr Kavanaugh has denied any allegations of sexual misconduct, and suggested during Senate testimony last week that he was generally well-behaved in college – someone who liked beer, but did not let his drinking go too far.

The New York Timeshas reported that the FBI has at least four witnesses who are of interest to the intelligence agency as it takes a look at Mr Kavanaugh’s past.

However, several people who are not on the list have contradicted the nominee’s testimony about the nature of his partying and behaviour over three decades ago.

Chad Ludington, a Yale classmate of Mr Kavanaugh’s who said he frequently drank with the nominee in college, told The New York Times: “When Brett got drunk, he was often belligerent and aggressive.

“On one of the last occasions I purposely socialised with Brett, I witnessed him respond to a semi-hostile remark, not by defusing the situation, but by throwing his beer in the man’s face and starting a fight that ended with one of our mutual friends in jail.”

Mr Ludington is joined by the likes of Kit Winter, who shared a dorm at Yale with Mr Kavanaugh; Liz Swisher, a college friend; and James Roche, a Yale roommate, in suggesting that Mr Kavanaugh was less than truthful when he told the Senate that he was never a belligerent drunk in college.

Others who claim to have known Mr Kavanaugh in college have said that he was often very drunk, in spite of his claims last week.

“I watched the whole hearing, and a number of my Yale colleagues and I were extremely disappointed in Brett Kavanaugh’s characterisation of himself and the way that he evaded his excessive drinking questions,” Lynne Brookes, a former roommate of Deborah Ramirez, who has accused Mr Kavanaugh of forcing her to touch his penis against her will, said during a CNN interview.

“There is no doubt in my mind that while at Yale, he was a big partier, often drank to excess, and there had to be a number of nights where he does not remember. In fact, I was witness to the night that he got tapped into that fraternity, and he was stumbling drunk in a ridiculous costume saying really dumb things”.

“I can almost guarantee that there’s no way that he remembers that night,” Ms Brookes continued. “There were a lot of emails and a lot of texts flying around about how he was lying to the Senate Judiciary Committee today”.

Mr Kavanaugh has denied Ms Ramirez’s accusations, and told the Senate Judiciary Committee that The New Yorker article detailing her allegations was the first time that he had heard the claim.

But, former classmates say that Mr Kavanaugh or his legal team began reaching out to them before the article was published on 23 September. Those classmates, a NBC News report says, were contacted as early as July about the allegations, and the classmates say they are in possession of text messages from that time. Kerry Berchem, one of those former classmates, says that she attempted to get those texts to the FBI several times.

“I am in receipt of text messages from a mutual friend of both Debbie and mine that raise questions related to the allegations,” Ms Berchem said in a statement provided to NBC. “I have not drawn any conclusions as to what the texts may mean or may not mean but I do believe they merit investigation by the FBI and the Senate.”

Mr Roche, Mr Kavanaugh’s college roommate, has also spoken up in support of Ms Ramirez, saying that Mr Kavanaugh was usually reserved but “a notably heavy drinker, even by the standards of the time, and … he became belligerent and aggressive when he was very drunk”.

The Senate Judiciary Committee voted on Friday to send Mr Kavanaugh’s nomination to the full Senate for consideration. That measure was approved along party lines, but one Republican senator, Jeff Flake, suggested that he would not vote to approve Mr Kavanaugh before the full Senate without an FBI investigation.

Senate Majority Leader Mitch McConnell, a Republican, has meanwhile attacked what he has called Democrats’ delay tactics to undermine the confirmation, and has promised to bring Mr Kavanaugh’s nomination to a vote this week.