Gary D. Cohn, President Trump’s top economic adviser, is the most recent high-profile member of the White House to announce plans to depart the West Wing. 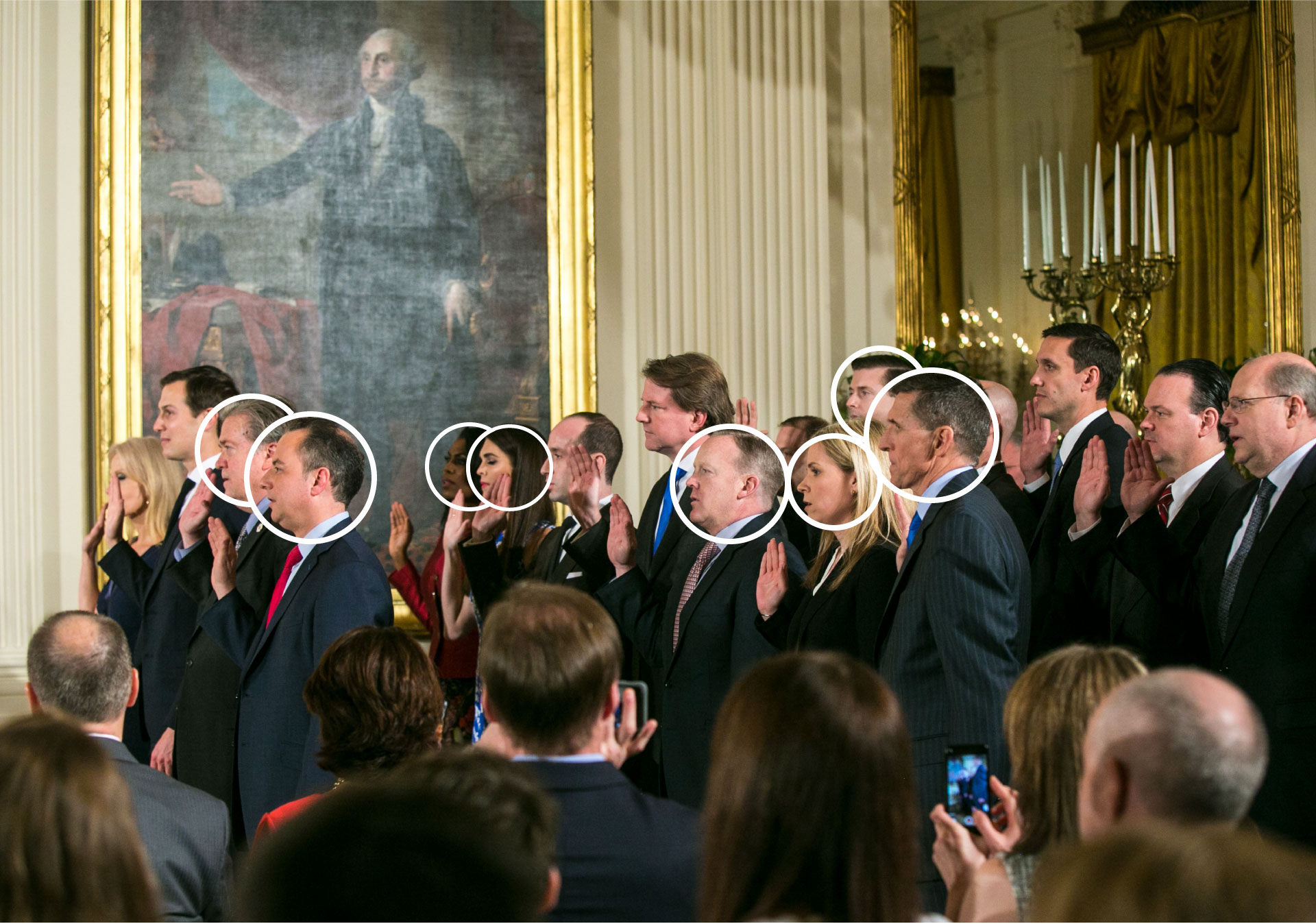 White House staff members were sworn in on Jan. 22, 2017, in the East Room. Photo by Al Drago/The New York Times

Below are the top White House officials who resigned, or were fired, dismissed or reassigned.

President Trump told aides in August he had decided to remove Mr. Bannon, a right-wing nationalist who has clashed with other senior White House advisers and members of Mr. Trump’s family. But a person close to Mr. Bannon said that he had submitted his resignation to the president earlier that month. Full story »

Mr. Cohn’s decision to leave came after he seemed poised to lose an internal struggle over Mr. Trump’s plan to impose large tariffs on steel and aluminum imports. Full story »

Mr. Dubke told colleagues that the reasons for his resignation were “personal.” Full story »

Mr. Trump asked Mr. Flynn for his resignation more than two weeks after he was told that Mr. Flynn had lied to the vice president and was vulnerable to blackmail by Russians. Full story »

Mr. Gorka served as an adviser to the president on national security issues. Two administration officials said that he was forced out, and a conservative website reported that he had resigned. Full story »

On Feb. 28, Ms. Hicks, one of Mr. Trump’s longest-serving advisers, said she planned to leave the White House in the coming weeks. Full story »

Ms. McFarland, who was brought to the White House by Mr. Flynn, was named ambassador to Singapore last May. Full story »

Mr. Porter cleared out his office in early February amid accusations of spousal abuse. Full story »

The White House announced on Dec. 8 that Ms. Powell, one of the most influential women in the Trump administration, was going to step down. Full story »

Mr. Priebus was pushed out, tendering his resignation after Mr. Trump told Mr. Priebus he wanted to make a change and offered the job to John Kelly. Full story »

He was fired by Mr. Kelly days after a vulgarity-laced telephone call with a New Yorker reporter was made public. Full story »

One of the president’s most trusted aides, Mr. Schiller announced his departure in September. Full story »

Ms. Walsh was forced out by Jared Kushner and other West Wing officials. She joined the pro-Trump outside group America First Policies.

Mr. Cohen-Watnick was appointed by Mr. Flynn. He was pushed out by Lt. Gen. H. R. McMaster, who succeeded Mr. Flynn. Full story »

A former writer for Breitbart News who was appointed by Mr. Flynn, Ms. Dahl left the White House for a post at the United States Agency for International Development.

No explanation was given for his exit, but Mr. Harvey was appointed by Mr. Flynn and was widely reported to have been at odds with Mr. McMaster. Full story »

Mr. Higgins was forced out after writing a memo arguing that Mr. Trump was being subverted by an array of foreign and domestic enemies, including “globalists” and officials of the “deep state.” Full story »

Mr. Raffel mainly served as a spokesman for Mr. Kushner, the president’s son-in-law and senior adviser.

Mr. Short, who had been close to Mr. Spicer, resigned shortly after Mr. Scaramucci confirmed to reporters that he was planning to fire Mr. Short. Full story »