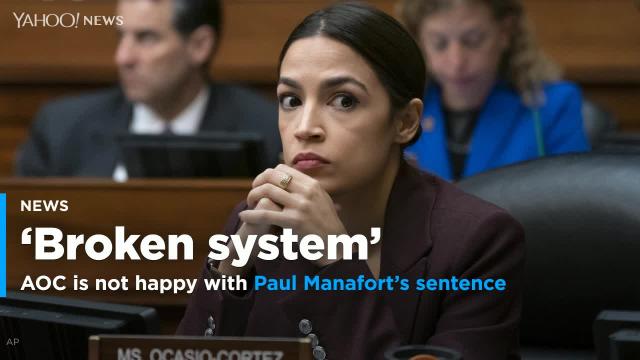 Alexandria Ocasio-Cortez has attacked the “broken” US justice system after Donals Trump’s former campaign manager was jailed for 47 months for a $6m (£4.5m) tax and bank fraud.

The New York Congresswoman said Paul Manafort’s punishment – well below the 19 to 24 years sought by prosecutors – was an example of how rich people were treated differently in court.

The sentencing by federal judge TS Ellis, who was appointed by Ronald Reagan, prompted lawyers and politicians to compare it to other cases involving longer prison terms, particularly those involving small amounts of drugs.

Last year the same judge sentenced Frederick Turner, 37, to a mandatory minimum of 40 years in prison for dealing methamphetamine. Judge Ellis expressed misgivings at the time, adding that the mandatory minimum was “wrong, but not immoral.”

Democrat 2020 presidential candidate Elizabeth Warren brought up the example of Fate Winslow, a homeless man who was jailed for life for helping to sell $20 (£15) worth of cannabis.

In other cases, a Texas woman, Crystal Mason, was sentenced to five years in prison for voting while on probation while a man was offered a prison sentence of between three and six years for stealing $100 from a laundry room.

Following a jury trial in Virginia last year, Manafort was convicted of hiding millions of dollars earned through his work advising politicians in Ukraine, including the former pro-Russia president Viktor Yanukovych.

His lawyers argued that it amounted to a routine tax evasion, which often results in prison sentences of less than 12 months, and claimed that Manafort would never have been charged if it were not for the investigation by FBI special counsel Robert Mueller into links between the Trump campaign and Russia.

While the charges were not related to his work on Trump’s campaign, prosecutors argued for a significant jail term because the 69 year-old tampered with witnesses during his trial, tried to shift the blame to others and failed to accept responsibility for his crimes.

Manafort still faces up to 10 years in prison when he is sentenced on two conspiracy charges in Washington DC next week. He had offered to cooperate with the Mueller probe after pleading guilty to those offences, but the deal was thrown out after a judge agreed he had lied to investigators.