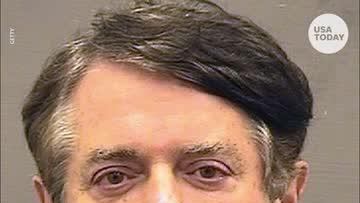 WASHINGTON – Within moments of Paul Manafort being sentenced to less than four years in federal prison, there was shock on cable news and online.

It was a far cry from the 12 to 25 years he could have been ordered to serve behind bars.

Many outlined cases in which defendants accused of lesser crimes were given much harsher punishments. Some used the case as a way to display the racial disparities within the criminal justice system.

Others targeted U.S. District Judge T.S. Ellis, who had been critical of prosecutors in special counsel Robert Mueller’s office. During Manafort’s sentencing on Thursday, Ellis said had committed “serious, very serious crimes,” but he also said Manafort had “lived an otherwise blameless life and earned the admiration of many.”

The issue sparked debate on how much time President Donald Trump’s former campaign chairman should spend behind bars and why the sentence was considerably below what sentencing guidelines called for and what prosecutors had noted in court filing.

But data from the U.S. Sentencing Commission for 2017 shows that Manafort is not alone in receiving a lesser sentence.

In the Eastern District of Virginia, where Manafort was sentenced, about a quarter of defendants were sentenced below federal guidelines. The data for the 2017 fiscal year shows that about two-thirds of defendants received sentences that fit within the guidelines.

Data shows the Eastern District took up 126 fraud cases in 2017.

When it came to drug and gun crimes, the sentences varied but were higher in the Eastern District of Virginia than national averages.

Of course, handing down a sentence is complex and judges consider an array of information, including who was harmed, any previous crimes and the sheer size of the crime.

A jury in Virginia convicted Manafort of eight charges, including bank and tax fraud, after a three-week trial last summer. The case, as well as a related one in Washington, stem from his work as a political consultant in Ukraine before he joined Trump’s campaign in 2016.

In explaining his sentencing decision, Ellis said “it is important to avoid unwarranted disparity” among comparable white-collar cases.

As an example, he cited a previous case that involved a more substantial loss to victims. In that case, over which Ellis also presided, he sentenced the defendant to seven months in prison.

Ellis also raised pointed questions about whether Manafort deserved credit for cooperation with prosecutors in the related criminal case in the District of Columbia where he agreed to plead guilty and assist the special counsel in the ongoing inquiry into Russian interference in the 2016 election.

Prosecutor Greg Andres told Ellis that Manafort deserved no credit, describing how the cooperation agreement collapsed when Manafort repeatedly lied to prosecutors and to a federal grand jury.

Ellis also questioned whether Manafort intended to defraud bank authorities on a $5.5 million loan application by not disclosing the existence of a separate outstanding loan, suggesting that it might have been an oversight by a “very busy man.”

The notions did not sit well with others, including Democratic lawmakers.

“My view on Manafort sentence: Guidelines there for a reason. His crimes took place over years and he led far from a ‘blameless life.’ Crimes committed in an office building should be treated as seriously as crimes committed on a street corner,” Democratic Sen. Amy Klobuchar, a 2020 presidential candidate. “Can’t have two systems of justice!”

The difference in Manafort’s sentence from that of someone who commits a drug or gun violation was noted by many attorneys, public defenders and former federal prosecutors on social media Thursday.

Scott Hechinger, who serves as a public defender in New York for the Brooklyn Defender Services, outlined an array of cases he and his colleagues have worked, including a client that he said on Wednesday was offered a sentence by prosecutors of between 36 to 72 months for stealing $100 in quarters from a residential laundry room.

He said the offer was a result of the crime being considered a second-degree felony in New York, where the minimum sentence is listed as 3 1/2 years.

Hechinger said he was not advocating for harsher sentences or that Manafort should serve more time but wanted to showcase “the outrageous disparity” between Manafort’s case and that of poor people of color. He added he wished “my clients received [the] same treatment as the privileged few.”

Ken White, an attorney and former federal prosecutor, said on Twitter that Manafort’s sentence was one “defense lawyers dream of.”

“It’s the kind of departure that’s FAR more likely to be enjoyed by the sort of person who commits crimes with banks and wires than drugs or guns,” he tweeted.

In an interview with USA TODAY, White added that Ellis’ leniency wasn’t a sign of bias.

“I think that’s the simple explanation that lets this system off the hook,” White said. “The real issue isn’t Manafort getting 47 months, but that so many other people get much longer sentences.”

He noted Ellis’ track record of opposing mandatory minimum sentences for drug and gun crimes that constrain judges to hand down harsh sentences but allow “broad discretion for cases like Manafort’s, where the defendant has money.”

White noted that while this case may be a good example in the harsh realities of the criminal justice system, it’s just one of many similar cases.

In addition to 47 months in prison, Ellis ordered Manafort to pay a $50,000 fine and approximately $24 million in restitution, and to spend an additional three years on federal supervision. Ellis said the nine months Manafort has already spent in jail should count against his total sentence.

Ellis’ decision is not the end for Manafort.

He will be sentenced again next week in a related case in Washington where he faces an additional 10 years in prison after pleading guilty to conspiracy charges for failing to report his lobbying work in Ukraine and tampering with witnesses.