The labor movement has deep roots in Illinois — here’s why

Illinois is home to five of the most significant figures and events in the history of the nation’s labor movement, including the strike that led to the creation of Labor Day. 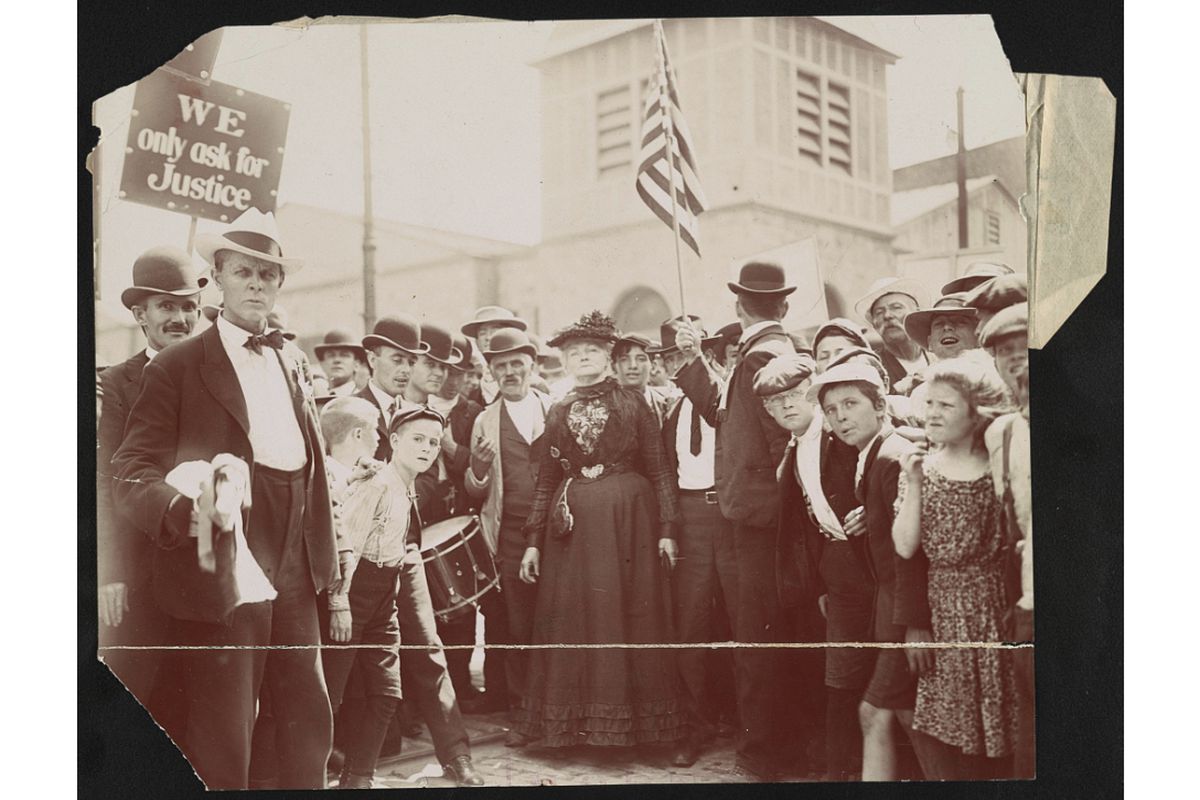 In this 1909 photo, Mother Jones and her army of striking Philadelphia textile workers start out on their descent on New York. The textile workers say they intend to show the people of the country their condition by marching through big cities. Pierce & Jones Photographers

The U.S. is celebrating the 125th anniversary of Labor Day as a national holiday on Monday.

From organizing unions to effecting labor laws, our state has played a vital historical role as a flashpoint — sometimes involving violence and danger — for workplace fairness. These are some of the key figures and events of that struggle.

She lost her own family, so she adopted a new one: a huge one, lifting up the cause of labor.

In the process, Mother Jones became perhaps the greatest labor force in the history of Illinois.

An Irish immigrant and dressmaker, Mary Harris landed in Memphis, Tennessee, where she met and wed George Jones, a foundry worker and union supporter. They’d had four children by 1867, when an epidemic of yellow fever claimed the entire household, save Mary. The 30-year-old widow relocated to Chicago to start anew with a dress shop, but it was lost in the Great Chicago Fire of 1871.

She scraped to get by, sometimes sewing piecework for wealthy Chicago families. As she’d gaze out their picture windows, she gained a keen eye and soft heart for disenfranchised.

Jones gravitated to organizing with the Knights of Labor, then the United Mine Workers. Her labor-rights moxie quickly won over workers. She’d travel to help wherever the call — garment workers in Chicago, steelworkers in Pittsburgh, bottle washers in Milwaukee — railing against companies and corporations for fair wages and safe working conditions.

At the close of the 19th century, Illinois became a labor battleground, especially for downstate miners, drawing her attention. After she died in 1930, she was buried among the miners laid to rest at Union Miners Cemetery in Mount Olive. Her simple marker carries some uncharacteristically purple prose, in part extolling: “She gave her life to the world of labor, her blessed soul to heaven.”

It’s almost a shame she isn’t remembered there from one of her most telling quotes: “I’m not a humanitarian. I’m a hell raiser.”

With the explosion of a stick of dynamite, the Haymarket Affair became a key flashpoint of the U.S. labor movement.

By May 1886, Chicago had become a labor battleground, with pro-labor forces fighting for better working conditions and pay. The tug of war also included radical anarchists who wanted to overthrow capitalism, sparking fear among much of the public.

To advance the idea of an eight-hour workday, a labor rally was set for May 4 — a day after police fired upon on an angry mob of striking Chicago workers, killing two. The rally seemed peaceful, ending as a throng of police stepped through to disperse attendees. Then a stick of dynamite was hurled at the police, killing seven cops and one civilian. In return, officers started firing into the crowd, wounding dozens.

Eight men were arrested and convicted in connection with the bombing, though the thrower was never found. Still, four were hanged. At the gallows, one said, “The time will come when our silence will be more powerful than the voices you strangle today.”

His words proved prescient. Though a wave of xenophobia had swept the nation immediately after the bombing, public skepticism gradually grew over what increasingly seemed like a sham prosecution. Of the other four defendants, one committed suicide while the other three were sent to prison; however, they were later pardoned.

The martyrdom of the defendants fueled pro-labor forces, eventually leading to the eight-hour workday, along with the creation of International Workers’ Day on May 1.

The Pullman Strike was the first national strike in American history, riveting the country to the burgeoning labor movement.

South of Chicago, the Pullman Co. not only built and leased passenger train cars but set up a company town of Pullman, allegedly as a model community. But during a recession in 1893, the company laid off workers and cut wages yet did not reduce rents.

Led by the American Railway Union, 4,000 Pullman workers went on strike May 22, 1894. Gradually, the strike grew nationally: By June 30, 125,000 workers on 29 railroads had walked off the job rather than handle Pullman cars. The strike shut down much of the nation’s freight and passenger traffic west of Detroit.

In early July, the federal government (leaning on antitrust and commerce laws) obtained a court injunction ordering ARU leaders from inciting workers to refuse to work. President Grover Cleveland sent federal troops into Chicago. As the city swarmed with more than 14,000 troops and policemen, 6,000 rioters destroyed hundreds of railcars on July 6. The next day, federal troops responded to an assault by firing into a mob, killing as many as 30 people.

Public opinion, originally in favor of workers, switched to opposition as rail service languished. Federal troops were recalled on July 20, effectively ending the strikes. The company agreed to rehire strikers, as long as they sign a pledge to never join a union. But their rents were not reduced.

As a conciliatory gesture to the labor movement, President Cleveland and Congress created Labor Day.

In 1922, a nation recoiled in horror at gruesome strike violence in downstate Illinois.

That month, the United Mine Workers continued a nationwide strike. However, at the Southern Illinois Coal Co.’s strip mine near Herrin, workers kept working to pull coal from the earth but not ship it out.

In mid-June, however, the owner decided to violate the agreement and ship coal. When the union workers refused, he fired them and called in replacements from Chicago — 50 men unaware they had been hired as strikebreakers in an area where 90 percent of the workforce carried a union card.

On June 21, shots rang out at the mine, though accounts differ as to who pulled the trigger first. Regardless, soon one strikebreaker and two strikers were dead, with a third seriously wounded. Union men from the entire region thundered to the mine, en route grabbing guns and ammunition from shops.

Realizing their outnumbered predicament, the strikebreakers agreed to stop work in exchange for safe passage out. On the morning of June 22, they came out of the mine, and union workers marched them toward town, along the way killing the mine’s one-legged superintendent.

After several miles of walking, the group reached a barbwire fence. Strikers lined up the scabs against the fence and told them to run for their lives. As they clawed to climb the fence, strikers opened fire, killing and wounding many.

The final death toll was 23. In the aftermath, prosecutors obtained 214 indictments. But when the first few resulted in acquittals by sympathetic local juries, the rest were dropped.

The nation reacted to the massacre with disgust. President Warren Harding characterized it as a “shocking crime, barbarity, butchery, rot and madness.”

The Cherry Mine Disaster

Though touted for modern safeguards, the St. Paul Coal Co. Mine sparked one of the worst disasters in mining history.

The mine, located in Cherry about 50 miles northeast of Peoria, was considered to be secure when it opened in 1905. But on Nov. 13, 1909, an electric outage prompted miners to light kerosene lanterns and torches to continue to pull coal from the deep mine.

Shortly after noon, embers from a wall lantern dropped below into a coal car filled with hay for mules. Flames spread to support timbers and quickly raced through the mine.

Of 490 miners, 200 men and boys managed to scramble out. Meanwhile, a large shaft fan was reversed in an attempt to blow out the fire but only succeeded in spreading the blaze. The mine’s two shafts were shut to smother the fire, but the tactic cut off oxygen to miners and allowed black damp (a suffocating mixture of carbon dioxide and nitrogen) to build up in the mine.

Twelve volunteers went down a shaft in a lift to attempt a rescue. All died.

Eight days after the ordeal began, 21 survivors were brought to the surface, though two later died. In the end, 259 men and boys died.

Several families lost two or more relatives. Among the dead were a father-son team, the Kralls, whose bodies were found locked in an embrace.

The disaster also claimed the lives of brothers John, Morrison, David and James Love, immigrants from Scotland. A surviving Love brother, William, later married the widow of one of the men who died while trying to rescue the trapped miners.

The Cherry Mine Disaster inspired a crackdown on child-labor laws and led to mine-safety rules that eventually paved the way to modern worker’s compensation laws.

This story is part of the Illinois Important Dates series, a collection of stories written by newspapers around the state, including the Chicago Sun-Times, and distributed by the Illinois Associated Press Media Editors Association and the Illinois Press Association.