Will Greed Be The EPA Leader’s Downfall? Environmentalists weren’t able to block the confirmation of Scott Pruitt as EPA Administrator based on his horrendous record of climate change denial and plundering natural resources. But Pruitt’s growing corruption scandal has given them new hope.

Friends of the Earth has hung hundreds of posters around downtown Washington, D.C. — including in front of the Trump Hotel — mocking Pruitt for getting a deeply discounted deal on a condo he rented from the wife of a fossil fuel lobbyist. 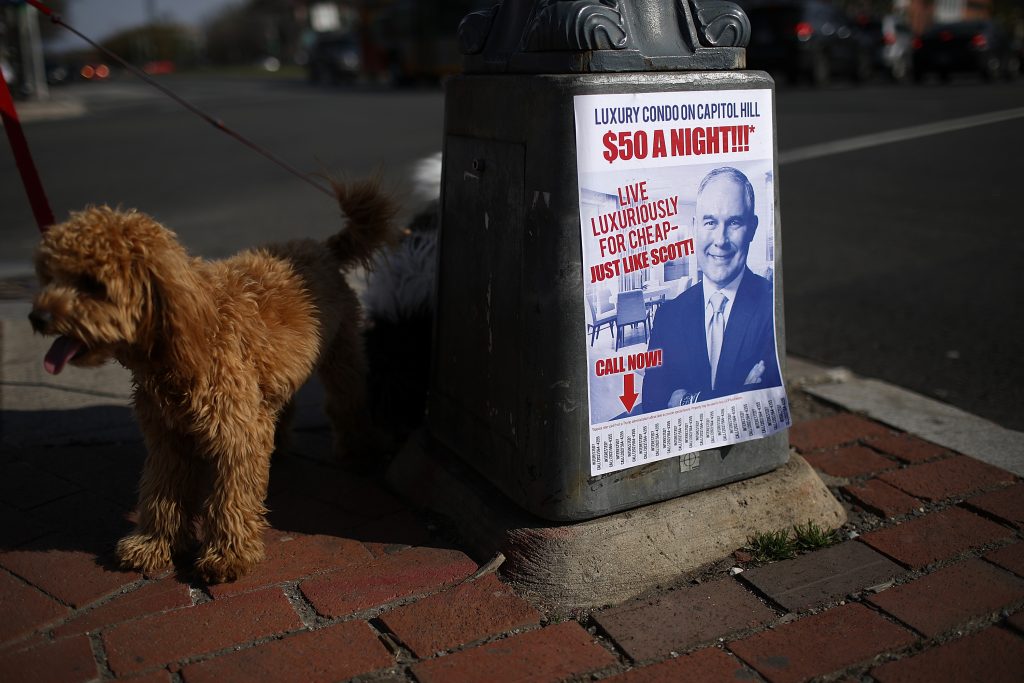 On the bottom of the posters are pull tabs listing the phone number for the EPA’s Office of Public Affairs.

In a more serious statement, Friends of the Earth accused Pruitt of “living in the lap of luxury, and all on the taxpayer’s dime.” On top of the condo scandal, they note that he has “wasted millions of taxpayer dollars on first class flights and other absurd luxuries, like a $43,000 soundproof phone booth or dragging his 20-person security detail with him on trips to Disneyland and the Rose Bowl.”

One scandal that’s generated headlines is a secretive trip Pruitt took to Morocco that cost taxpayers $40,000, which included the tab for two nights in high-end hotels in Paris. What’s gotten less attention is that Pruitt spent part of this trip working to set up export deals for U.S. gas companies — activities that are not at all part of his job as our nation’s top environment protector.

“The actual corruption going on here is even worse than the appearance of corruption,” said Basav Sen, Climate Justice project director at the Institute for Policy Studies. “If Pruitt goes down, it will probably be for his lesser crimes, but at least his ouster would set an example for others.”

The pressure on Pruitt is certainly mounting. On April 18, 39 Senators signed a resolution calling for Pruitt’s resignation — the largest number in history to call for the removal of a cabinet official. On the House side, 131 members signed a similar statement. While no Republicans were among the endorsers, several have also called for Pruitt’s ouster.

So far, President Donald Trump has been standing behind Pruitt, tweeting on April 7 that the embattled official was “doing a great job.”

Last September, the president didn’t show the same loyalty when it came to his Health and Human Services Secretary, Tom Price. After a controversy erupted over what some might consider a less serious spending scandal — his penchant for flying in private jets instead of commercial planes — Price was shown the door.

The EPA Administrator is ‘living in the lap of luxury, and all on the taxpayer’s dime.’

But, as Sen explains, “Tom Price is a run-of-the-mill ‘cut taxes’ type of conservative, whereas Pruitt represents the really hardline ideological right wing. And while Trump didn’t come out of that tradition, he seems to have decided that those are now his fellow travelers. Also, he’s feeling more under siege now than last year and so we may see a circling of the wagons in response to that pressure.”

Pruitt’s opponents are still ramping up pressure on the President. In addition to their guerrilla postering, Friends of the Earth joined with the Sierra Club, the NAACP, SEIU, and numerous other groups in running full-page ads calling for Pruitt to resign or be removed. The ads ran in Pruitt’s hometown newspaper, the Oklahoman, as well as two papers President Trump reportedly reads — the DC edition of the New York Times and the New York Post. The “Boot Pruitt” campaign has also run ads on Trump’s favorite TV show — Fox and Friends.

Like so many powerful and destructive men before him, it could be Pruitt’s personal greed — rather than the damage he’s inflicted on the world — that ultimately will be his downfall.