We’ve heard from the first ladies. Where are their husbands? 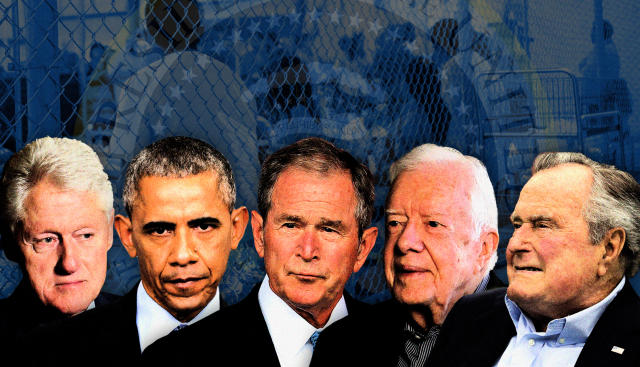 There are weeks that can define a presidency for all time, moments that seem to reveal the essential character of an administration as the world remembers it.

You think of George W. Bush flying over a drowning New Orleans in 2005, seemingly oblivious to the chaos and incompetence below. Or those weird summer days in 1979 when Jimmy Carter, returning from a self-imposed spiritual retreat, offered the country a sermon on moral drift and then demanded the resignations of his entire Cabinet. (Although maybe Carter’s defining episode actually occurred that spring, while he was vacationing in Georgia, when his fishing boat was chased by a vicious “swamp rabbit.”)

And so might we look back on this week, decades from now, as the one that cemented the enduring impression of the Trump administration, which, for all its entertaining gyrations, always seems to end up at a place of meanness and misdirection.

The images of wailing toddlers in cages, the sound of their anguished crying for Mommy, the initially defiant pose of a president who is never happier than when he’s arousing the basest of emotions — all of these seemed to crystallize some revolting need in this White House to isolate and punish otherness.

So tasteless was this week’s episode of Trump Unbound that, in addition to the outcries even from cowering Republicans in Congress, every former first lady felt moved to publicly oppose the policy of snatching immigrant children from their parents and throwing them into detention centers.

In a Washington Post op-ed, the normally reticent Laura Bush compared Trump’s short-lived policy to the internment of Japanese-Americans during World War II. (It was an imperfect comparison on the facts, given that the vast majority of detainees in 1942 were American citizens, but it rang true in terms of imagery and prejudice.)

All of this, I thought, reaffirmed the basic goodness and resilience of our political culture, but raised a few questions about who wasn’t yet speaking out more forcefully about the ugly arc of our politics.

Namely: Why have the husbands of all these political wives been so tepid? And if this isn’t a time for the other five living presidents to put basic American values above the tradition of not criticizing their successors, then what would such a moment look like?

To be fair, Bill Clinton did tweet a few lines criticizing the border policy on Father’s Day. Barack Obama posted some box-checking stuff on Facebook. OK.

But I’m not talking about opposing any single administration policy, or about issuing a few sentences of mild dissent before tee time.

I’m talking about the oath each of these guys took, hand on the Bible, to protect and defend the Constitution. Presumably that wasn’t only about enforcing the letter of the law. Presidents aren’t federal judges.

No, what each of them pledged was to vehemently defend the basic ideals of American pluralism and tolerance, here and abroad. And I don’t think that pledge expired on the day the moving van showed up at the White House.

Maybe we didn’t know exactly what we were getting when Donald Trump took the same oath on Jan. 20, 2017. It was fair to wonder, after a career in self-promotion and a campaign centered on cheap hats, whether Trump had any real ideology at all, and how he might evolve once the considerable burdens of the office were his.

And we probably assumed that Trump would make some dumb and erratic policy choices along the way. That’s fine. All presidents do.

But we know now who Trump really is, at his political core. He’s an ethnic and economic nationalist. He fervently believes that countries — ours and others — do better when they rally around a mythical common heritage and repel outsiders. He believes that leaders who rule under the banner of national superiority are men to be admired and trusted.

How else to read the recent tweet in which Trump taunted Europeans, and especially Germans, for “allowing millions of people in who have so strongly and violently changed their culture”? Or the one a few days ago in which he talked about immigrants who would “infest” our country, like vermin? It’s like Trump made a bet with someone that he could recycle Nazi propaganda and no one would care.

How else to explain his evident idolatry for strongmen like Vladimir Putin and Kim Jong Un, his public longing for showy military parades, his war on global trade agreements and multilateral alliances?

Trump isn’t just an isolationist; he idealizes national purity and imperial order. His politics isn’t “America First”; it’s “Americans First,” and he gets to decide who qualifies.

None of this is against the law. It’s not impeachable. It’s just inherently un-American, and it blows up an age-old consensus about what our president is supposed to represent in the world.

The last three presidents certainly suffered their share of failures in trying to lead an integrated world and repel the forces of radical nationalism. Clinton championed a kind of unrestrained globalism that hollowed out communities. George W. Bush initiated a calamitous war. Barack Obama couldn’t get his own party behind a landmark trade pact.

But all of them, like every president for a century before them, saw the American presidency as an essential platform for integrating societies and transcending ethnic divides. They disagreed sharply about how best to embody those values, but they did not consider the proposition that America could embody anything else.

All of which leads me back to my initial point. When do these ex-presidents, who generally bond over funerals or humanitarian crises, call one another and say, “You know what? If nothing else, we need to go out there together and tell the world that the America we represented still exists.” That would count for a lot.

Because there are moments in our national life when you know you’ll look back and wish you’d said more. The Japanese-American internment after Pearl Harbor was one. Or the turning away of Jewish refugees from Europe as the Holocaust was beginning. Or the systematic smearing of alleged Communists and sympathizers during the McCarthy years.

Maybe, for our most admired living politicians, seeing the president of the United States wave the flag of nationalism and ethnic separatism like some backwoods Balkan militia leader doesn’t sink to that level of betraying the office.

But then that really does prompt the question that each should be asking himself.