Alzheimer’s disease may be triggered by herpes virus, scientists suspect 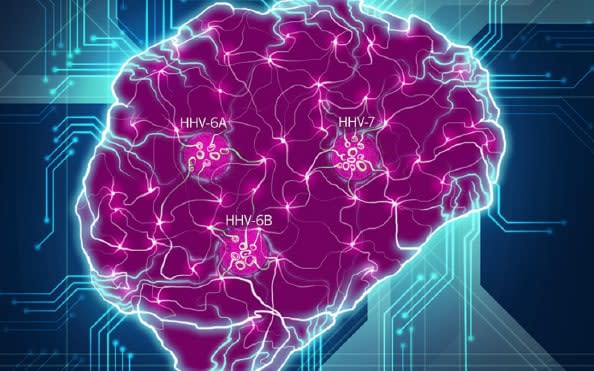 Alzheimer’s disease may be triggered by the herpes virus, a new study suggests, leading to hopes that antiviral medication could help prevent dementia.

Around 850,000 people are living with dementia in Britain, and the majority of people have Alzheimer’s which occurs when sticky plaques of amyloid build up in the brain, killing brain cells.

But new research has found that the brains of people who have died of Alzhiemer’s have almost double the level of HHV-6A and HHV-7 herpes virus as non-diseased brains, suggesting it is playing a role in the condition.

Researchers in the US believe that the disease may trigger an immune ‘cascade’ which encourages the growth of amyloid plaques.

It raises hopes that cases could be prevented through antiviral drugs. 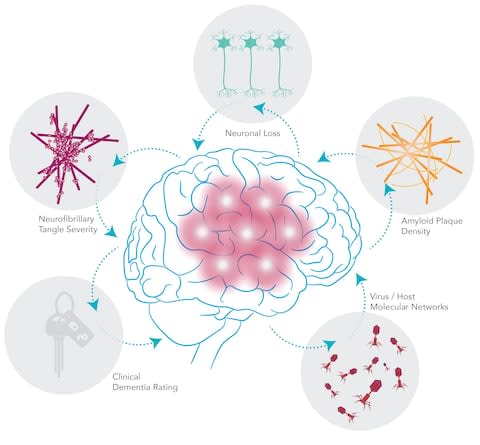 How herpes in the brain could trigger Alzheimer’s

The team did not set out to study the impact of herpes, but were looking for anything which might be different in six key brain regions in people with Alzheimer’s compared to those who were dementia free.

They began by sequencing DNA from the dead patients to find out information about inherited genes, followed by their RNA to find out how those genes were expressed.

“We didn’t go looking for viruses, but viruses sort of screamed out at us,” said lead author assistant research professor Ben Readhead of Arizona State University.

“We saw a key virus, HHV 6A, regulating the expression of quite a few Alzheimer’s risk genes and genes known to regulate the processing of amyloid, a key ingredient in Alzheimer’s neuropathology.”

The study authors say the findings suggests that Alzheimer’s could be ‘collateral damage’ caused by the brain’s response to the virus.

Both HHV 6A, and 7 are common herpes viruses and most people are exposed to them early in life. It is different from the Herpes-simplex virus which causes cold sores and genital herpes.

The level of the virus in the brain also correlated with clinical dementia scores before death. Those with more viral DNA performed worse in tests.

“I don’t think we can answer whether herpes viruses are a primary cause of Alzheimer’s disease,” said study senior author, Dr Joel Dudley, Director of the Institute for Next Generation Healthcare at the Icahn School of Medicine at Mount Sinai.

“”But what’s clear is that they’re perturbing and participating in networks that directly underlie Alzheimer’s.

“If it becomes evident that specific viral species directly contribute to an individual’s risk of developing Alzheimer’s or their rate of progression once diagnosed, then this would offer a new conceptual framework for understanding the emergence and evolution of Alzheimer’s at individual, as well as population, levels.”

“This now gives the potential to investigate the impact of viruses more directly in experimental studies, so that we can really understand whether there may be important implications for treatment or prevention.”

Prof Ruth Itzhaki, Professor Emeritus of Molecular Neurobiology at the University of Manchester, and Honorary Senior Research Fellow at the University of Oxford, added: “A picture is building up showing strong links between herpes viruses and the likelihood of developing Alzheimer’s disease.

“We now need more research to establish whether these viruses are causally linked to Alzheimer’s, and whether using that information we might be able to develop treatments.”

The research was published in the journal Neuron.

Video: These Lifestyle Changes Can Reduce Risk of Alzheimer’s

Most people think of Alzheimer’s as an old person’s disease, but doctors say it can actually start formulating in your brain as early as your 30’s. While that might be a scary thought, there are a few lifestyle changes you can make now that experts believe could impact your risk of developing the disease.

“One out of three cases of Alzheimer’s may be preventable if that person does everything right,” explained Dr. Richard Isaacson, director of the Alzheimer’s Prevention Clinic at Weill Cornell & New York-Presbyterian Medical Center in New York City.

These lifestyle changes can reduce your risk of getting Alzheimer’s

Isaacson stressed how important it is to make changes now: “20 to 30 years is ample time to make brain-healthy choices.” So what can you do?

1. EXERCISE REGULARLY, AT A HIGH INTENSITY.

“Exercise can protect against Alzheimer’s because it not only increases blood flow to the brain, but it loosens up that amyloid plaque, the bad sticky stuff that gets caught up and gunked up in the brain of a person with Alzheimer’s disease,” noted Isaacson.

Any exercise helps, but experts recommend getting at least three hours of rigorous activity a week. Ideally, that would be two cardio workouts and one strength-training session.

Start from 0! This low-impact workout is perfect for beginners

2. GET AT LEAST 7.5 HOURS OF QUALITY SLEEP EVERY NIGHT.

When you sleep, the brain can clean out the damaging amyloid plaques.

“Turn off the electronics, no bright lights from the screens, no texting, no emails. Have a quiet, dark room. And clear your mind,” Isaacson advised.

2 generations of Alzheimer’s bond under 1 roof

Avoid sugar and processed foods, and you might want to switch to a Mediterranean diet. The brain shrinks as you age, but a study published last year in the journal Neurology found people in their mid-70’s who consumed a Mediterranean diet (more fruits, veggies, olive oil, and less meat and cheese) lost less brain mass than people who ate a diet more typical of their country, Scotland. A bigger brain later in life is beneficial and could protect from diseases like Alzheimer’s.

7-day Mediterranean diet to look and feel better than ever

Experts say the best brain diet is comprised of foods like leafy greens, whole fruits and vegetables. While you shouldn’t obsess over counting calories, try to aim for 2,100 calories a day.

4. GET YOUR BLOOD CHECKED EVERY YEAR.

Keep your brain challenged, TODAY correspondent Maria Shriver noted. Shriver recommended the website BrainHQ, which features many brain exercises that have been linked to dramatically lower rates of dementia in seniors.