What Happens Now That McCabe Is Fired? Consider These Five Things.

We appear to be experiencing a slow-motion “Saturday Night Massacre.” 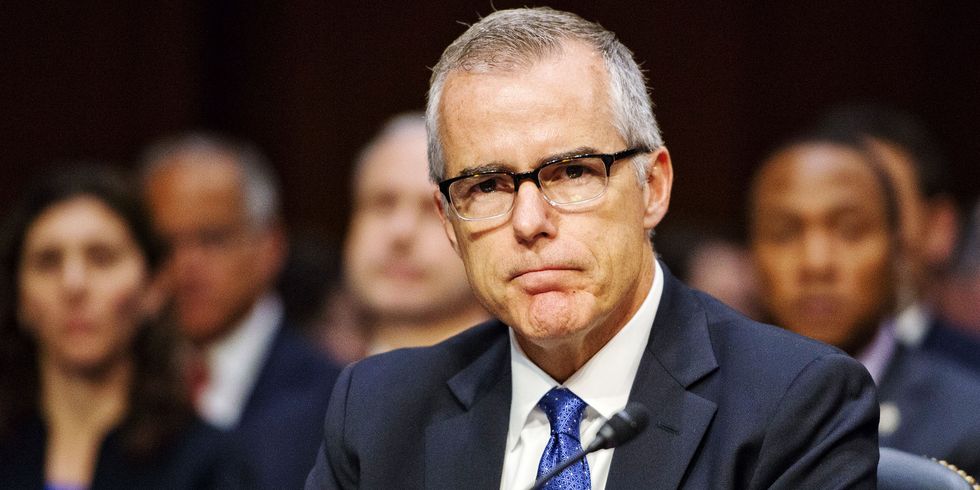 By now, this much is clear: comparing our current constitutional “crisis” to Watergate only gets one so far. President Trump is far better situated to withstand the legal charges against him than President Nixon was four decades ago. That’s true even if, as some believe, the allegations against Trump and his people may be more pervasive than those swirling around Nixon and his crew before the latter resigned in disgrace. From Congress to the courts to the media, the institutional forces that checked Nixon’s power are far weaker today than they were in 1973 and 1974.

Count me among those who believe we are not yet at a “crisis,” but are witnessing instead a form of slow-motion “Saturday Night Massacre”—a rolling devolution in norms and standards, the latest iteration of which we endured Friday night when an attorney general who might be indicted himself for false statements fired a former FBI deputy director for reportedly lacking “candor.”

“Constitutional rot” is what we are supposed to call what is happening, and that’s as evocative a phrase as any, I guess. Trump ultimately destroys all he touches (especially the truth) and he’s trying to destroy what we thought we all agreed on about constitutional checks and balances.

If Michael Horowitz is in the tank for Trump, the Justice Department is in even worse shape than we think it is.

In my dealings with the Inspector General over the years, I have found him to be an honorable, earnest public servant. Horowitz is a professional and not a partisan, which is why so many journalists, academics, and law enforcement specialists over the weekend urged caution about prejudging the merits of the report Attorney General Jeff Sessions used to justify McCabe’s firing. If Horowitz is feeling undue pressure from Sessions or the president, I am confident he would do something about it. If he’s become a Trump toady, I’d be shocked, and worried.

McCabe was cooperating with the Mueller probe before he was fired.

The special counsel has had those “contemporaneous notes” McCabe took about the Comey firing for a while now, so it’s not as though McCabe suddenly became a key witness in the investigation once Sessions fired him. McCabe’s testimony will not be altered by his sudden defenestration at the FBI. Trump knows this, which is why he is doing the only other thing he can do: attempt to undermine McCabe’s credibility. Who do you think Mueller believes more? Comey and McCabe and their contemporaneous notes, or Trump and Sessions? Trump understands this calculus, which is why the stronger the case against him gets, the more unhinged are his attacks on Mueller.

Sessions has made a mockery of his recusal.

The Justice Department argues that the attorney general’s recusal doesn’t extend to personnel matters, like firing the former deputy director of the FBI who was investigating the subject matter of the recusal, but as Ryan Goodman and others have noted, that’s terribly weak sauce. The other big Sessions news of the weekend is that the paragon of ethics in Washington may have lied to Congress, and perhaps as well to Mueller’s investigators, about his role in the dance between the Trump team and the Russians in 2016. That puts him squarely on the hook for criminal charges if Mueller is so inclined.

If Trump, Sessions, or Rosenstein fire Mueller, and Senate and House Republicans do nothing but wring their hands about it, will you really be surprised? The tepid response to McCabe’s firing from the GOP caucus, and the new questions surrounding Sessions’ credibility, and the president’s deranged Tweeting, are additional warning signs that we shouldn’t presume these people are going to step up and be honorable Americans when the moment comes. “Sounding the alarm”? Hardly. Sen. Rand Paul’s comment—“I wouldn’t advocate it”—when asked how he would react if Mueller were fired tells you what you need to know about the courage behind that “libertarian” vote on Capitol Hill.

John Dowd, one of the president’s lawyers, deserves the client he has (and vice versa).

I know that journalists have to share with the world what the president’s lawyers say. I know that part of the story here is whether and to what extent the president himself is signaling things through the comments of his advocates. But John Dowd’s Saturday “prayer” for an end to the Mueller investigation is one of those moments that might have been better downplayed, or even ignored. Every defense lawyer in history has prayed for the end to a prosecutor’s investigation into a client’s misconduct. Pro tip? Apply the same amount of skepticism the next time you see a story about negotiations between Team Trump and Team Mueller over a presidential interview.

Here Are All the Details About Comey’s Memoir