Unequal justice under the law

Does our criminal justice system truly guarantee JUSTICE FOR ALL? Not if you don’t have the money to hire your own top-notch attorney, it doesn’t. Our Cover Story is reported by Lee Cowan:

You’re about to hear some pretty strong words from this law professor … so strong they’re almost hard to believe:

“When we pledge allegiance to the flag and we say ‘liberty and justice for all,’ that’s just not true. I’m sorry,” said Stephen Bright.

“So is the notion of equal justice under the law really just a myth?” asked Cowan.

Bright currently teaches law at Yale University, but spent much of his career at the Southern Center for Human Rights, fighting to help those charged with a crime but who can’t afford an attorney to defend them in court.

People like Shanna Shackelford, who says her life was ruined after her home outside Atlanta caught fire in 2009.

She wasn’t home at the time, but a small insurance policy she had taken out on the rental house made investigators suspicious.

“I thought it was just a misunderstanding, like, they’re going to figure this out, and it’s going to be okay,” she told Cowan. 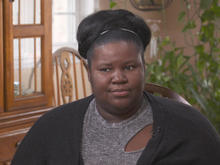 After a fire in her home led to an arson charge, Shanna Shackelford had to rely on a public defender to represent her case. He recommended she accept 25 years behind bars.  CBS News

But it wasn’t. Shackelford found herself under arrest, charged with arson. “My grandma was like, ‘You might need to get an attorney and talk to somebody,'” Shackelford said.

But she didn’t have money for an attorney. So she applied for a public defender — a court-appointed lawyer tasked with making sure the 6th Amendment is upheld. (That’s the part of our Constitution that guarantees any of us the “assistance of counsel.”)

It’s a right that’s been tested in court, most notably in a case brought in the ’60s by a petty thief in Florida named Clarence Gideon. Unable to afford an attorney, Gideon was convicted and sentenced without one.

He appealed, arguing his right to an attorney had been violated, and the U.S. Supreme Court agreed. But while the Constitution may promise everyone legal counsel, it says nothing about the quality of that legal counsel, a deficit Shackelford felt right away.

She told Cowan it took about two for her to hear from her public defender: “His response was, ‘I have a bunch of cases like yours, so I’ll get to it when I get to it.'”

When he finally did “get to it,” instead of going over the details of her case, Schackelford says he simply told her to plead guilty, and take 25 years behind bars. 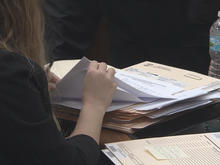 A public defender at court with her case files. CBS News

Shackelford’s case is not unusual. Nearly every case, roughly 90% in fact, often end in a guilty plea, largely because even if a poor defendant is innocent, most can’t afford bail or to wait in jail for trial, which means losing their jobs, their cars, maybe even their homes in the process.

“Being arrested and spending four or five days in jail can be enough to ruin a person’s life, even if they’re ultimately found not to be guilty of anything,” said Stephen Bright.

Take the city of Cordele, Georgia, for example, where at one hearing defendants all plead guilty as a group, with no evidence presented. Bright calls it the “Meet ’em and plead ’em” defense.

“You’ll see a crowded courtroom and there will be a lawyer there with his legal pad, and he’ll be, ‘Ms. Smith? Is Ms. Smith…? Raise your hand,'” said Bright. “They’re trying to identify their own clients! They’re getting ready to go before a judge in just a moment.” 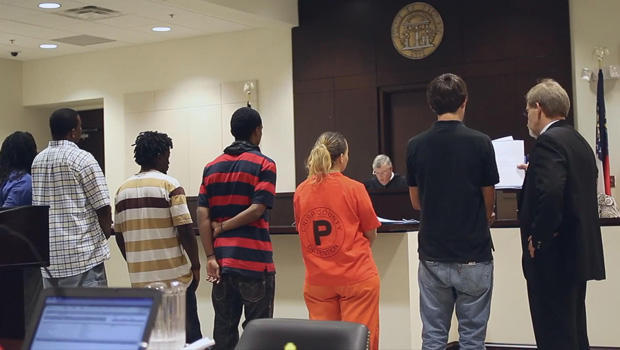 Cowan saw the same thing happen in a Miami courtroom, where one Public Defender had to handle a crowd of clients all at once.

“I don’t care who the person is, I don’t care how dedicated they are; you cannot represent 500 criminal clients at the same time and give those clients the representation that they’re entitled to,” said Bright.

Nowhere is the problem of indigent defense more acute than in Louisiana, which has the highest incarceration rate not only in the country, but in the world. 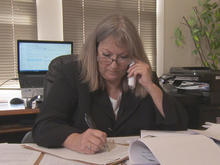 Rhonda Covington is the sole public defender responsible for representing anyone too poor to afford a lawyer in her judicial district. That district encompasses about a thousand square miles.

She says she has to defend five to six hundred people every year. The professional standard, according to the American Bar Association, is about 150 felony cases a year … and some think even that’s too much.

Covington has two paralegals and two contract attorneys who help with the load, but they’re only part time. It’s mostly just her and her two cats (named Liberty and Justice).

She even cleans the office herself.

“Some people say, ‘Well, any defense will do,'” Covington said. “And some people think, ‘Well, you know, they shouldn’t have representation because they’ve been arrested.’ My job is not to get people off when they’ve committed crimes. That’s not what I do. What I do is to ensure that their Constitutional rights are protected.”

The bulk of the state funding for Louisiana’s Public Defender offices comes from an unpredictable source: its traffic tickets, which out on these country roads isn’t exactly a windfall.

According to Covington, the District Attorney’s office budget is five to six times hers.

“And out of that budget comes assistants, and investigators, and access to pay for things like DNA testing?” asked Cowan.

Doing more with less is why she thinks she lost the case for one of her clients, 56-year-old James Waltman. She told him, “I’ve decided to go ahead and file a second motion for a new trial, citing the reason being that we had insufficient funds in order to investigate your case.”

Waltman admitted he assaulted his wife during an argument, but the state also charged him with kidnapping and rape — sentence-heavy crimes he insists he never committed. Rhonda believes with some investigation she could have at least lessened the charges. But she didn’t have the time or the money. “I couldn’t shut down my whole office for that one case,” she explained.

“Being innocent I had all the confidence in the world, that I’d walk out,” Waltman said, getting emotional. “But it didn’t happen.”

All across Louisiana, public defenders in 33 of the state’s 44 judicial districts now admit they’re in the same boat Rhonda Covington is in; they’re simply too busy to ethically handle their caseloads.

“If you ain’t’ got a paid lawyer, you’re going to go through this,” said Joseph Allen. He was arrested last year in Baton Rouge for a firearms violation, as well as a marijuana charge. The court didn’t even know he was in jail, because his public defender didn’t know he was in jail.

Dowan asked, “Did you feel like anybody was on your side?”

“Nobody there to sort of help you through the legal maze, nobody to explain the charges?”

Now, Allen and 12 others are suing Louisiana’s Governor and the Public Defender Board in a class action lawsuit brought by the Southern Poverty Law Center.

“I don’t believe in filing lawsuits unless you really have to, right?” she said. “If there were a way to avoid filing it, we would have, but this injustice has gone on really for too long. It’s unacceptable.”

Back in Georgia, Shanna Shackelford spent years researching her case by herself. Her public defender was too busy with other cases, she says.

In the process, she lost two jobs and her home. After all, who wants to hire or rent to a suspected arsonist?

Had it not been for Stephen Bright — the only person who would seriously look into her case — Shackelford would probably be in jail. His investigation, which he did for free, proved that the fire was the result of faulty wiring, not arson.

It took him just two weeks to get her case dismissed.

“Two weeks,” Shackelford said. “That’s all it took. Someone to do a little research, and try.”

It still took Shackelford three more years to get the charge off her record.

But now with the nightmare finally behind her, she has started anew. She’s opening her own business, and focusing on being a mom to her two-year-old son, Ja’Ben.

“You did get justice, but not the way it should have come,” said Cowan. “Or at the price.”

“No,” she said. “It was almost like having to give up my life, for my freedom. And that’s what I had to choose in the end. I had to give up so many years in order to get the point of freedom.”