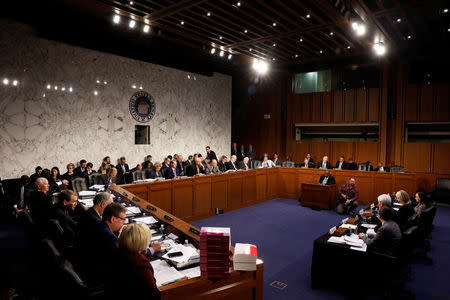 The Senate Finance Committee is seen during a markup on the “Tax Cuts and Jobs Act” on Capitol Hill in Washington, U.S., November 15, 2017. REUTERS/Aaron P. Bernstein

WASHINGTON (Reuters) – A Senate Republican tax plan that would repeal the Obamacare mandate and give permanent tax cuts only to U.S. corporations drew fire from two Republican lawmakers on Wednesday in what could be a sign of trouble for the sweeping measure.

Republican Senator Ron Johnson of Wisconsin said he would not support the current Senator proposal, or a separate tax bill being debated in the House of Representatives, because he believes they unfairly benefit corporations over other kinds of enterprises, including small businesses.

Senator Susan Collins, one of three Republicans who opposed a Republican Obamacare repeal effort earlier this year, warned that some middle-income taxpayers could see tax cuts wiped out by higher health insurance premiums if the repeal of the Affordable Care Act’s mandate goes through.

Their views could signal problems for Senate Republicans, who want to pass tax legislation by December but can afford to lose no more than two votes from their ranks because they have only a 52-48 majority in the Senate. Democrats have called the Republican tax plans a giveaway to the rich and corporations.

“Neither the House nor Senate bill provide fair treatment, so I do not support either in their current version,” Johnson said in a statement, adding he would still work with his Republican colleagues to produce better legislation.

Senate Republicans produced a new plan late on Tuesday that would guarantee permanent tax cuts for corporations but only temporarily lower tax bills for individuals and small businesses, while tying the overall package to an effective repeal of a key part of Obamacare, former Democratic President Barack Obama’s signature healthcare law.

Exposing the tax-cut initiative to the same political risks that wrecked a mid-2017 anti-Obamacare push by Republicans, Senate tax committee chief Orrin Hatch unveiled an amendment that he defended as helpful to the middle class.

Collins, a Maine Republican, told reporters that adding the mandate repeal was a mistake. “This is going to be difficult and I just don’t know why we had to complicate it by bringing up the ACA,” she said.

Several moderate Republicans including Collins and John McCain have not said if they support the tax plan.

The new Republican plan, Hatch said at a committee meeting, would expand the child tax credit and slightly reduce some middle-class tax rates. Taken together, those changes “will let us channel even more tax relief to the middle class,” he said.

But those changes would be temporary, while a deep cut in the corporate tax rate would be permanent under Hatch’s plan, which was widely expected to become the main vehicle for Republicans efforts to revamp the tax code before year end.

The effort is seen by Republicans as critical to their prospects of retaining power in Washington in the November 2018 congressional elections. So far, Republicans and President Donald Trump have no major legislative victories from 2017 to show voters despite controlling the White House and Congress.

They are hoping the tax cut will fix that problem and have made progress in recent days while Trump toured Asian capitals. He returned late on Tuesday and was scheduled to meet with lawmakers on Thursday.

The House began debating its tax bill on Wednesday, with a full vote expected on Thursday.

The Senate and House tax plans must eventually be reconciled and merged into a final plan that can pass both chambers before it goes to Trump to sign into law.

By including an effective repeal of Obamacare’s individual mandate, Senate Republicans likely ended any possibility of gaining support from Democrats.

“This is not just another garden variety attack on the Affordable Care Act, or ACA. This is repeal of that law,” said Senator Ron Wyden, the finance committee’s top Democrat. He blasted Republicans for setting a “double standard” by guaranteeing permanent tax cuts only for corporations.

The individual mandate clause of Obamacare requires healthy younger people to buy insurance or pay a federal penalty. The aim is to hold down coverage costs for those sick or older.

By repealing that penalty, Republicans would raise more than $318 billion over a decade to pay for tax cuts, according to the Joint Committee on Taxation, a nonpartisan unit of Congress.

The nonpartisan Congressional Budget Office separately estimated last week that repealing the mandate would increase the number of uninsured Americans by 13 million by 2027.

Trump backed the inclusion of the mandate repeal in the tax bill, as do Republican conservatives in the Senate and House.

U.S. House Speaker Paul Ryan told CNBC on Wednesday that while the House tax plan did not repeal the mandate, Republicans in that chamber would likely approve a final measure hammered out with the Senate that included it.

Hatch’s Senate plan would also expand access to deductions for “pass-through” businesses and increase the child tax credit to $2,000 from the earlier proposed $1,650. But those benefits would expire at the end of 2025.

The changes would still allow the measure to comply with a deficit requirement that must be met if Senate Republicans are to pass the legislation with a simple majority. The Senate tax plan is required to add no more than $1.5 trillion over 10 years to the federal deficit and national debt. Otherwise, Senate Republicans would need 60 votes.