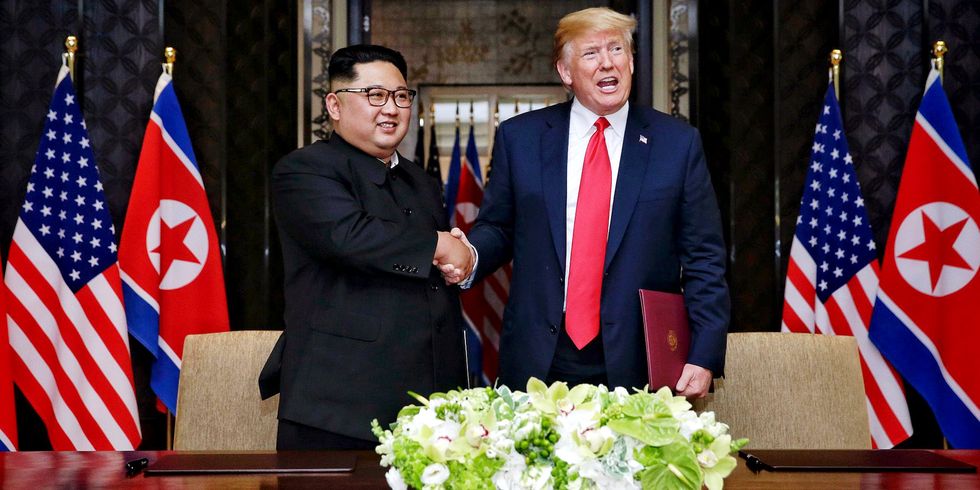 Every foot is the wrong foot.

Yes, it is better to talk than to rattle plutonium at each other. Yes, given the history of United States foreign policy going back at least to the 1890s, it is absurd to get hysterical about an American president meeting with bloodthirsty foreign leaders. Yes, to those of us who are old enough to remember the conservative howling when Jimmy Carter tried to make human rights central to American foreign policy, it is hilarious to hear conservatives waxing wroth about the subject now. Yes, yes, yes.

At the same time, this was a singularly absurd spectacle, as well as one of the strangest episodes in the history of cable news, a real-life anime exercise to rival all those shots of an empty podium that so enthralled the nation during the 2016 presidential campaign. Endless shots of an empty road in Singapore, “live coverage” of a closed-door meeting, of which there is no official record, between two of the most notorious bad-faith artists ever to lead sovereign nations. Meanwhile, pundits in Washington, D.C., practiced their remote viewing skills on camera.

Then, there was this press conference to remind us who we’re dealing with here as our president*. I slept through it, and I feel confident that I made the right choice. From The Washington Post‘s transcript:

“Well, [Kim] is very talented. Anybody that takes over a situation like he did at 26 years of age and is able to run it and run it tough, I don’t say it was nice or I don’t say anything about it, he ran it. Very few people at that age, you can take one out of 10,000 probably couldn’t do it.”

“Otto Warmbier is a very special person and he will be for a long time in my life. His parents are good friends of mine. I think without Otto, this would not have happened. Something happened from that day. It was a terrible thing. It was brutal. But a lot of people started to focus on what was going on, including North Korea. I really think that Otto is someone who did not die in vain. I told this to his parents. A special young man and I have to say, special parents, special people. Otto did not die in vain. He had a lot to do with us being here today.”

“No. Not at all because if you look at it, I mean it said we are going to — let’s see here. It will be gone — I don’t think it can be anymore plain than what we’re asking, issues related to the establishment of the new U.S.-DPRK relations, the building. We talk about the guarantees. And we talk about unwavering commitment to the complete denuclearization of the Korean Peninsula. This is the document that we just signed…Yes, we did. Yes, we did. And we’ll be verifying. Yes. We’ll be verifying. It will be verified.”

“He actually mentioned the fact that they proceeded down a path in the past and ultimately as you know nothing got done. In one case, they took billions of dollars during the Clinton regime. Took billions of dollars and nothing happened. That was a terrible thing. And he actually brought it up to me. And he said, we have never gone this far. I don’t think they’ve ever had the confidence, frankly, in a president that they have right now for getting things done and having the ability to get things done.”

Wait. Kim told him that North Korea had taken billions of dollars from the Clinton Administration and did nothing in return and now, what, Kim feels guilty about the whole thing? I find the credibility of this account…disturbing.

“Yes, we’ve done exercises for a long period of time working South Korea. And we call them war games, that I call them war games, and they’re tremendously expensive, the amount of money that we spend on that is incredible. And South Korea contributes but not a hundred percent, which is certainly a subject that we have to talk to them about also. And that has to do with the military expense and also the trade. So, we’re doing that, we actually have a new deal with South Korea in terms of the trade deal. But we have to talk them, and we have to talk to many countries about treating us fairly. But the war games are very expensive, we pay for a big majority of them, we fly in bombers from Guam, I said it when I first started, I said, where do the bombers come from? Guam, nearby, I said, “Oh, great. Nearby. Where is nearby? Six and a half hours. Six and a half hours? That’s a long time for these big massive planes to be flying to South Korea to practice and then drop bombs all over the place and then go back to Guam.”

“I know a lot about airplanes, it’s very expensive…I think it’s very provocative, I have to tell you, Jennifer, it’s a very provocative situation. When I see that, and you have a country right next door, so under the circumstances that we are negotiating a very comprehensive, complete deal, I think it’s inappropriate to be having war games.”

As iodine shares skyrocket on the South Korean stock market.

“From the beginning, we got along. But there’s been a lot of ground work. This wasn’t like we went and we started talking about as you know, right? We didn’t just come in and start talking about these very complex subjects that have been going on for 70 years. We’ve been discussing this for months. And once the rhetoric stopped, once they did a great thing — North Korea did a great thing by going to the Olympics because the Olympics and President Moon will tell you this, the Olympics was not exactly doing great. People didn’t feel like being bombed out of the opening ceremonies. They weren’t exactly selling tickets. And as soon as the chairman, Chairman Kim, said “Let’s participate in the Olympics”, it sold like wildfire and was a great success as an Olympics. It was a great success. He did a great thing.”

“I may be wrong, I mean I may stand before you in six months and say, ‘Hey I was wrong.’ I don’t know that I’ll ever admit that, but I’ll find some kind of an excuse.”

Most truthful thing he’s ever said. It’s the moment he became president*.

“As an example they’ve got great beaches… I explained, you could have the best hotels in the world right there. Think of it from a real estate perspective.”

Beyond all that, and the equally strange interview with ABC’s George Stephanopolous, this was an anomalous exercise between two anomalous creatures of history. The two anomalous creatures signed an anomalous document that really doesn’t commit anyone to anything. There is really nothing to comment upon, except for the fact that an American president* met a leader of North Korea for the first time. There’s no reason for them to trust each other, and no reason for the rest of us to trust either of them.

And, besides, no country in the history of the world willingly has given up all its nuclear weapons once it had them. I am skeptical that North Korea under its present leadership is going to be the first one to do so. But, hey, maybe they really want a yacht club and a couple of casinos.

These Photos of Trump and Kim Jong Un Are Weird

Dennis Rodman Interview Was One for Our Times