Trump Is a ‘Blowhard,’ ‘I Don’t Like Him’ and I Voted for Hillary, George Bush Says in New Book 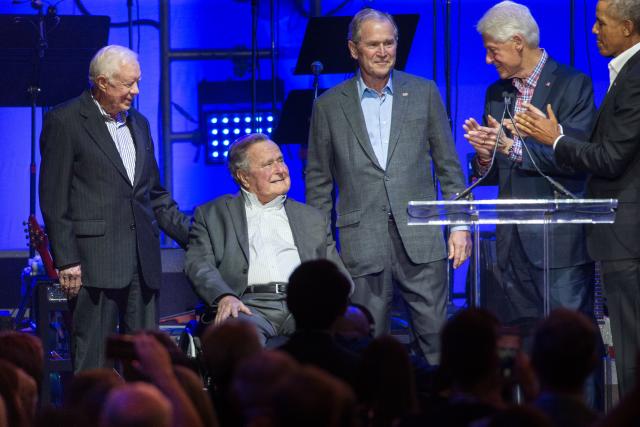 Trump Is a ‘Blowhard,’ ‘I Don’t Like Him’ and I Voted for Hillary, George Bush Says in New Book

Update | Both former President Bushes had choice words for current President Donald Trump in a new book scheduled to be published later this month, with the elder Bush reportedly calling the billionaire commander-in-chief a “blowhard” and flatly stating he does not “like” him.

Presidents George Bush and George W. Bush, the 41st and 43rd top executives respectively, spoke to author Mark K. Updegrove for the book “The Last Republicans.” It detailed the relationship between the father-and-son presidents and how they were fretful of what Trump had done to the Republican Party.

Furthermore, both ex-presidents admitted they did not vote for Trump. The elder Bush pulled the lever for Democrat Hillary Clinton while the younger told Updegrove he voted for “none of the above.”

Trending: Alaska Wants To Drill For More Oil To Cover The Costs of Climate Change

“I don’t like him,” George Bush said in May 2016 according to a The New York Times on Saturday. “I don’t know much about him, but I know he’s a blowhard. And I’m not too excited about him being a leader.

Trump, who started his first trip to Asia as president on Friday, shot back in a statement that the Iraq War was “one of the greatest foreign policy mistakes in American history,” and challenged both Bushes legacies and effect on the GOP.

“If one Presidential candidate can disassemble a political party, it speaks volumes about how strong a legacy its past to presidents really had,” the statement to CNN on Saturday read. “And that begins with the Iraq war, one of the greatest foreign policy mistakes in American History. President Trump remains focused on keeping his promises to the American people by bringing back jobs, promoting America First foreign policy and standing up for the forgotten men and women of our great country.”

George W. Bush took umbrage with Trump’s divisive brand of political machinery, a common accusation the current president faced along the campaign trail as throughout his first year in office.

Don’t miss: Half Of Hawaii’s Coral Reefs Damaged In One Year, And It’s Going to Get Worse

“You can either exploit the anger, incite it,” he said, “or you can come up with ideas to deal with it.”

Trump ran as an anti-establishment Republican, made famous by his “drain the swamp” promise and slogan, and the younger Bush president admitted his brother and former GOP presidential candidate Jeb “didn’t fit with the mood.”

The comments were striking since former U.S. presidents traditionally avoid criticism of the White House incumbent but Donald Trump’s ascension changed that tradition.

The Bushes also made a not-so-veiled statement following President Trump’s comments in the wake of the deadly Charlottesville, Virginia, protest in August.

“America must always reject racial bigotry, anti-Semitism, and hatred in all forms,” their joint statement read, according to CNN. “As we pray for Charlottesville, we are reminded of the fundamental truths recorded by that city’s most prominent citizen in the Declaration of Independence: we are all created equal and endowed by our Creator with unalienable rights,” they said in a joint written statement on Wednesday. “We know these truths to be everlasting because we have seen the decency and greatness of our country.”

The book will be published Nov. 14.

This story was updated to include President Trump’s response to the Bushes comments.