Trump Administration Takes Another Step To Roll Back Obamacare 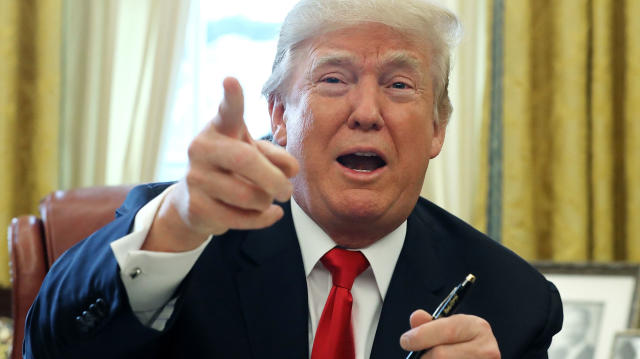 Republican efforts to roll back the Affordable Care Act’s insurance reforms continued Tuesday, when the Trump administration proposed regulations that would make it easier for health insurers to sell cheap, short-term policies that leave out key benefits and are available only to people in good health.

Announcement of the proposal, which has been in the works for several months, came two months after President Donald Trump signed Republican legislation eliminating the individual mandate, which makes people pay a financial penalty if they don’t have insurance.

Taken together, the two steps ― getting rid of the mandate and then changing the rules on short-term plans ― could accelerate an evolution already underway for people buying insurance on their own, rather than through an employer.

In many states, premiums have risen substantially in the past few years, as plans have struggled to attract customers in relatively good health. Federal tax credits, which the Affordable Care Act also created, insulate low- and many middle-income people from these increases ― allowing them to get comprehensive coverage, regardless of medical status, at low prices.

But people at higher incomes receive no such assistance and, in some cases, the premiums make it difficult or even impossible for them to get traditional insurance. This is particularly true in more rural parts of the country, and especially for older consumers, thanks to a combination of factors ― some related to the design of the ACA, and some related to the way hostile Republican officials at the state and national level have implemented it.

The regulation that the administration proposed on Tuesday would make it easier for some of these people to get short-term plans, which are generally cheaper because they do not have to follow all of Obamacare’s rules. They do not have to cover mental health and other “essential benefits,” for example, and they can have annual or lifetime limits on the bills they will pay.

But short-term plans are generally not available to people with pre-existing conditions and wouldn’t cover the expenses of people with some serious illnesses anyway. If short-term plans were to draw off a substantial number of relatively healthy customers, they would drive up the price of traditional, fully regulated insurance plans even more.

In the end, the new regulation could allow some people ― especially those who find current coverage unaffordable ― to buy ultra-cheap, relatively skimpy plans.

“It’s time to offer more affordable coverage options,” Seema Verma, administrator of the Centers for Medicare and Medicaid Services, said during a conference call Tuesday. “It’s about allowing individuals, not the government, to make decisions about what works for them and their families.”

But the new regulations would also render the law’s insurance reforms less effective, making it more difficult for people who need or want more comprehensive coverage to get it.

“This is the Trump administration’s end run around Congress,” Sabrina Corlette, research professor at Georgetown University’s Center on Health Insurance Reforms, told HuffPost. “The end result will be higher premiums and fewer plan choices for people with health care needs, as well as for healthy people who want the kind of benefits and financial protection that real insurance is supposed to provide.”

A key variable in all of this is the states, which have authority to regulate such plans on their own. Several already have strong rules on the book, as a recent survey of state policies from the Commonwealth Fund noted. More states could take similar action.

The Kind Of Insurance Obamacare Was Supposed To Eliminate

Short-term plans are a vestige of the old health care system, the one that existed before the ACA took effect and made comprehensive coverage more widely available. At least in theory, these plans are primarily for people with temporary gaps in coverage ― because they are in between jobs, or perhaps about to have a change in their life circumstance like getting married.

Obamacare allowed insurers to keep selling such plans, but it also gave the federal government authority to regulate them tightly.

The Obama administration did just that. When it wrote the rules for the individual mandate, the administration said that short-term plans would not count as qualifying coverage, which meant that people who had these plans would still have to pay the penalty. The administration also limited these short-term policies to durations of just three months — although that regulation just took effect this year, and some insurers have found ways to sell a year’s worth of coverage even with that regulation in force. (Basically, they allow customers to buy four plans, each for a duration of three months, at one time.)

The Obama administration made these decisions because the whole point of the ACA’s private insurance reforms was to transform the market for people buying coverage on their own, so that everybody ― healthy and sick, young and old ― was paying into one pool and was part of the same system. That way, insurers would have enough money to cover the bills of people with serious medical conditions.

But the Obama administration wasn’t simply out to ensure the newly reformed insurance markets could work. Regulations on short-term plans were also meant to protect consumers.

Frequently, people who bought short-term plans ended up facing crushing medical bills, because agents or insurers hadn’t made limits on these plans clear ― or because insurers had found reasons not to cover bills after the fact. In one case that’s currently the subject of a lawsuit in federal court, a heart attack victim who had a short-term policy is on the hook for $900,000, according to a story on short-term plans by Reed Abelson of The New York Times.

Now, Republicans are undoing these reforms. The regulations that the Trump administration just proposed would rescind the Obama administration’s limit on short-term plans, so that insurers could sell policies that last a full year. Starting in 2019, people buying such plans wouldn’t have to worry about paying the individual mandate penalty, since the GOP’s new tax legislation reduces that penalty to zero.

The majority of people buying coverage on their own are eligible for tax credits that offset premiums, which get bigger as premiums go higher. In general, they won’t have to pay more for coverage, even as it gets more expensive. But people who earn too much to qualify for the tax credits ― anybody with income above four times the poverty line, or $98,400 for a family of four ― would bear the full brunt of those higher premiums.

It’s a problem that already exists in some states, like Iowa and Tennessee, but it could get worse and affect even more Americans if the Trump administration regulations go into effect, especially if the new measures cause more insurers to abandon markets altogether.

Just how big a difference this regulation would ultimately make is difficult to say. In a fact sheet accompanying the proposed regulations, HHS said that for 2019 it expects 100,000 to 200,000 people to drop traditional coverage and buy short-term policies instead. That is not a huge number.

But over time, the plans could draw even more people, especially if insurers and the independent brokers who sell plans push them aggressively. And some experts think that rough estimate, of just 100,000 to 200,000 people shifting plans initially, is too low.

The regulations must go through a formal, 60-day comment period before they become final. During that period, the three departments issuing the regulation ― Health and Human Services, Labor, and Treasury ― are likely to hear from a variety of experts, advocates, and industry groups wary of the changes.

One of them is America’s Health Insurance Plans, the largest trade organization representing insurers. “While we are reviewing the proposed rule to understand its impact on the people we serve, we remain concerned that expanded use of short-term policies could further fragment the individual market, which would lead to higher premiums for many consumers, particularly those with pre-existing conditions,” Kristine Grow, group’s senior vice president for communications, said on Tuesday.

But not all insurers will be unhappy if these new regulations are finalized. UnitedHealth, which dropped out of AHIP a few years ago, already sells such policies. In an earnings call in October, the company’s chief executive said the opportunity to sell more of them ― along with so-called “association health plans,” which allow small businesses to buy policies that are also exempt from some of the Affordable Care Act’s regulations ― would be a profit opportunity.

The proposed regulation also seeks comment on the question of whether, somehow, these short-term plans should be “renewable” ― that is, whether insurers should allow people to stay on the same plans, year after year. Of course, doing so would seem to mean they aren’t really short-term plans at all, but rather an alternative form of long-term insurance that simply isn’t subject to regulations protecting people with pre-existing conditions. In theory, that is not legal under the Affordable Care Act.

If and when the regulation becomes final, as seems likely, attention will shift quickly to state officials, who can regulate insurance plans on their own. States could decide to keep the three-month limit in place, for example. Or they could go as far as New Jersey did, and prohibit short-term plans altogether.

They could also decide, separately, to introduce their own form of the individual mandate, as officials in at least some states are already talking about doing.

This article has been updated to include comment from an America’s Health Insurance Plans representative.