The Pennsylvania Supreme Court has issued a new congressional map for the state — a decision that could have major ramifications for the balance of power in the U.S. House of Representatives.

The court issued the map after Governor Tom Wolf, a Democrat, and the Republican-controlled state legislature, were unable to submit a map satisfying both parties by the court-ordered Thursday night deadline.

“Implementation of this map would create a constitutional crisis where the Pennsylvania Supreme Court is usurping the authority of the Legislative and Executive branches. We anticipate further action in federal court,” Pennsylvania House Speaker and State Senate President Pro Tempore Joseph Scarnati wrote in a statement Monday.

The new map significantly redraws the districts that encompass the Philadelphia suburbs, a key purple part of a purple state where Democrats are poised to pick up seats, and it creates another competitive district in northeast Pennsylvania near the Allentown area.

Republicans currently hold 12 of the state’s 18 congressional districts, while Democrats control just five. One seat is currently vacant but will be filled following the March 13 special election to replace former Rep. Tim Murphy, R-Penn., who resigned over a sex scandal last year.

Under the newly issued map, both candidates in the March special election, Conor Lamb and Rick Saccone, would find themselves living outside of the 18th congressional district for which they are currently running to represent.

Democrat Conor Lamb, who lives in Mt. Lebanon, would find himself in the new 17th district, parts of which are currently represented by Republican Rep. Keith Rothfus. It’s an area that would receive an influx of suburban Pittsburgh Democratic voters and a race that could become more competitive than it has been in the past.

Republican Rick Saccone, who lives in Elizabeth, moves into the new 18th district encompassing much of the current 14th district which is presently represented by Democratic Rep. Mike Doyle. Democrats would continue to have a distinct advantage given the district’s inclusion of Pittsburgh’s urban core.

Prior to the court’s decision, both candidates have signaled that they are interested in running again in November, win or lose. In a statement provided to ABC News, Saccone called the new map “partisan,” but said he was “going to run and win in whatever district I compete in because it’s not about the lines that are drawn, but about the values I represent.” Lamb’s campaign did not immediately respond to a request for comment.

Despite the uncertainty ahead, outside groups remain focused on a potentially momentum-shifting victory in the district next month.

American Bridge, a Democratic Super PAC, is releasing a new digital ad this week bashing Saccone for “out of touch” comments on the region’s opioid crisis. But by happenstance, the ad will run on Facebook for users across Pennsylvania, not just in the 18th district, according to a PAC official, a move that could pay dividends should Saccone run elsewhere come November.

Numerous map submissions from both sides of the aisle were presented to the state Supreme Court, which ordered the state’s congressional boundaries redrawn late last month. But after Wolf vetoed a map submitted Republican leaders in the statehouse last Tuesday, it became clear both sides were not going to reach an agreement by the February 16 deadline.

Republicans in the state harshly criticized Wolf for rejecting the map they submitted, saying his decision “sets forth a nonsensical approach to governance.”

“This entire exercise, while cloaked in ‘litigation,’ is and has been nothing more than the ultimate partisan gerrymander – one brought about by the Democrat Chief Executive of the Commonwealth acting in concert with politically-connected litigants in order to divest the General Assembly of its Constitutional authority to enact Congressional districts,” Pennsylvania House Speaker Mike Turzai and State Senate President Pro Tempore Joseph Scarnati wrote in a statement last Tuesday.

Wolf submitted his own map last week that he claimed “combined features of legislative submissions” and was “statistically more fair than the Republican leaders’ submission.”

“From the outset, I have made clear I wanted a map that was fair and removed the partisanship that Pennsylvanians have been forced to live under since the 2012 elections,” Governor Wolf said in a statement Thursday. “This map takes features from Republican and Democratic submissions, while still meeting the court’s orders and opinion, to provide Pennsylvanians with a fair map.” 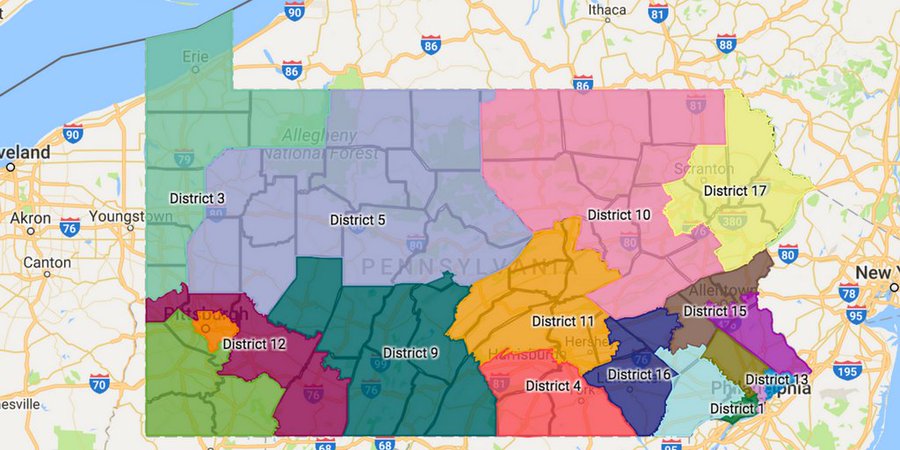 The new congressional map, if it survives the coming legal challenges from Republicans, could allow Democrats to pick up between 2 to 3 seats in the 2018 midterm elections.

“If the Pennsylvania map changes, it’s hard to imagine how the Republicans hold control of the House so maybe that’s why we’re seeing the desperation we’re seeing,” Michael Li, a redistricting expert at the Brennan Center for Justice, a non-partisan public policy institute, told ABC News.