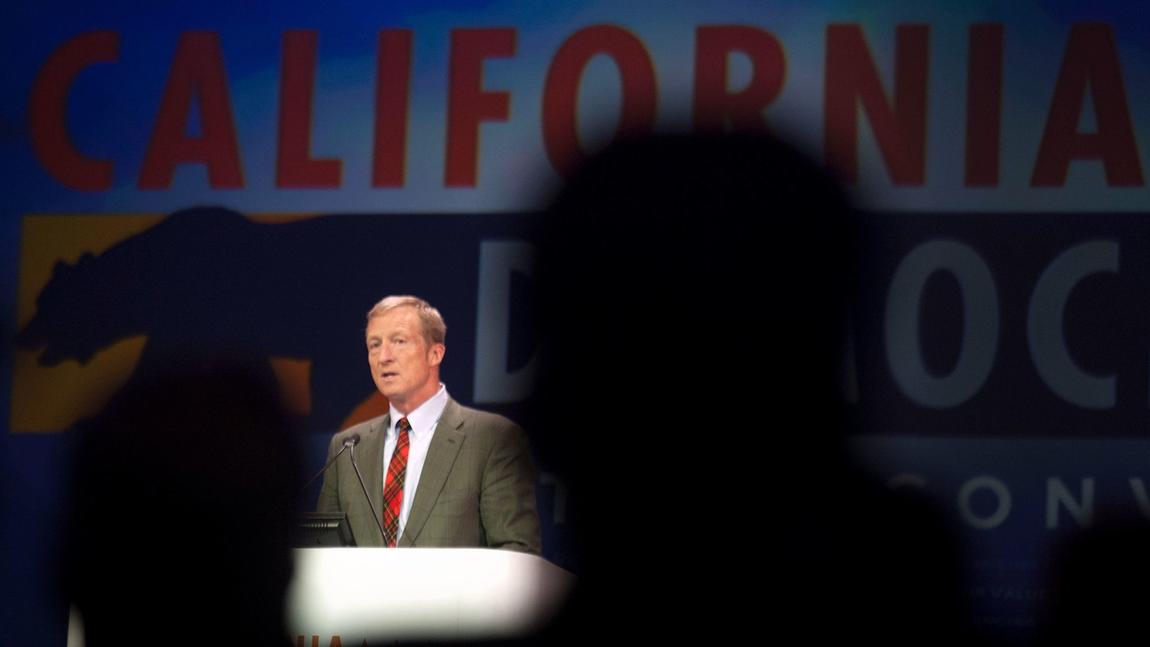 Tom Steyer, the author of this article, speaks at the California Democratic Convention, in Los Angeles on March 8, 2014. (Los Angeles Times)

As a billionaire, I would profit substantially from the tax cuts proposed last week by President Trump and the Republican Party. But I am strongly opposed to even one more penny in cuts for rich people and corporations.

My reason is simple: Tax cuts for the rich defund the critical public programs on which American families depend.

Three decades of data prove that tax cuts for the wealthy do not “trickle down” to working people or grow the overall economy. Since the Reagan era, Republicans have prescribed cuts for rich people and corporations as a cure-all. But every time they put their theory into practice, the rich just get richer and everyone else gets left behind. When such cuts drain the government of the revenue it needs to pay for essential services like public education, Medicare and Social Security, Republicans then seize the opportunity to shrink those programs.

Consider Kansas, where Republicans recently had the chance to pursue their tax-cut fantasy with an extreme anti-tax experiment. In 2012, they slashed taxes and promised fantastic growth. Instead, their scheme blew a hole in the state budget. The resulting shortfall in revenue forced severe cuts to public education and other essential programs, hurt working families and drove businesses out of the state.

Let’s raise taxes on the rich and use the money to invest directly in the American people.

Similar experiments at the national level have left the U.S. teetering on the edge of dangerous economic inequality. Today, the top 1% of the population takes more than 20% of the income generated here in a year. That’s more than double the share that rich people took in the 1970s. Meanwhile, the earnings of America’s working families have stagnated.

This degree of inequality is a major crisis, yet Republicans are proposing to exacerbate it by stripping trillions more in government revenue. Indeed, the GOP plan would put the country on a path to permanent economic inequality — and maybe that’s the point.

Some members of the ruling class are making a concerted effort to expand the wealth gap. A gang of powerful interests, led by the Koch brothers, launched a campaign to build support for the tax overhaul before it even existed. The coalition of wealthy conservatives spent tens of millions to mislead Americans about tax cuts. They had to: As the president of the Koch-backed group Americans for Prosperity, Tim Phillips, recently said of the “average Americans” whose support would be needed: “If they think it’s just a group of wealthy corporations or powerful special interests battling it out to see who gets the best carve-outs, then it will fail.” If the coalition succeeded in obscuring the truth, in other words, its investments would pay off.

This campaign illustrates why economic inequality poses a grave threat to democracy. In our political system, money is power. The more we allow Republicans to concentrate the lion’s share of wealth in the hands of a few, the more power these wealthy few will have. And they will use this power to continue rewriting the rules of both our economy and our political system in their favor.

As a presidential candidate, Donald Trump promised to “fix the rigged system.” By “fix,” he apparently meant rigging it to permanently benefit billionaires like himself.

Unrigging the system will require us to acknowledge that the American middle class enjoyed its strongest period of growth from 1950 to 1970 — a time when the effective tax rates for the wealthy were above 40% and the U.S. took unrivaled leadership in the global economy. It will require that we think of investment not as something done solely by the private sector, but as a category that encompasses public spending.

Bullish investment in the American people has arguably been the most important factor in our national success. But out of greed and selfishness, Republicans are intent on fighting such investment at every turn. After accumulating nearly all of the economy’s gains over the last 10 years, billionaires like Trump, and me, can more than afford to pay our fair share.

Let’s raise taxes on the rich and use the money to invest directly in the American people — by improving infrastructure, promoting clean energy, strengthening public education and expanding healthcare. Let’s boost wages to stimulate economic growth and job creation. It’s the only way we will create broad prosperity, rebuild the middle class and give working families a fair shake.

At a time like this, there’s only one reasonable position to take: I’m a billionaire. Please raise my taxes.