University to Students on Medicaid: Buy Private Coverage, or Drop Out 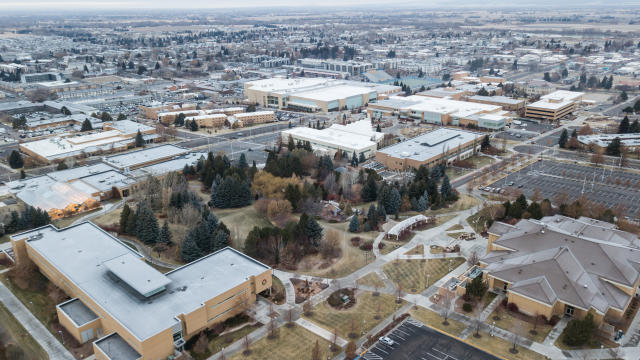 Emily and Kullen Langston were enrolling in classes for the winter semester at Brigham Young University-Idaho when they hit an unexpected roadblock.

The school, like many others, requires all students to have health coverage. But this month, the university made an unusual announcement: It would no longer accept Medicaid.

Emily Langston, 20, enrolled in the free government insurance program last year after becoming pregnant with the couple’s daughter, who is now 4 months old. Kullen Langston, 22, was planning to sign up for Medicaid in January, when it is set to expand in the state.

To remain in school, they would have to buy private coverage. The cheapest option available is the university’s student health plan, which does not comply with the Affordable Care Act’s consumer protections and would require the Langstons to pay a $3,125 annual premium.

Emily Langston said her family, which relies on the income her husband earns as a call-center operator, cannot afford that. She had hoped to become a teacher, but now intends to drop out of school, and her husband is unsure whether he will attend.

The decision on the eastern Idaho campus has confused and angered students. The change is set to go into effect on Jan. 1, the same day Idaho will expand Medicaid coverage to about 70,000 low-income residents, including college students.

In an email last week to its 19,000 students in Idaho, the university appeared to tie its decision to the Medicaid expansion. It’s not clear how many students currently have Medicaid coverage, but the state projects that about 2,400 more people in Madison County, where the school is, would enroll with the expansion. The university warned that having too many students sign up for the public program “would be impractical for the local medical community,” an assertion a local hospital official rejects.

The policy change is likely to push more students into a health plan administered by Deseret Mutual Benefits Administration, which, like the university, is owned by the Church of Jesus Christ of Latter-day Saints.

That plan limits annual benefits and doesn’t cover birth control — provisions that would violate the Affordable Care Act, but for a little-noticed Obama-era exemption for universities that fund their own health plans.

“It seems like a loophole, and is pretty misleading to students,” said Erin Hemlin, who oversees health policy at Young Invincibles, a nonprofit that focuses on issues affecting college students and young adults. “It’s called a student health plan, so you would think it’s going to be comprehensive coverage, and it isn’t.”

The church has been vocal on aspects of the Affordable Care Act, including religious freedom and the health law’s birth control mandate, but it has remained quiet on Medicaid expansion. It has never taken a public position on the issue, a church spokesman confirmed. The university’s Idaho campus and the church both declined to comment on the policy change.

Before the Affordable Care Act, student health plans across the country varied significantly from one campus to another. Some offered robust health benefits, while others had maximum annual benefits as low as $5,000.

The Obama administration required that most university plans comply with the new law by covering a wide array of essential health benefits, including maternity care and prescription drugs, and eliminating annual benefit caps.

The rules, issued in 2013, included a carve-out for a small number of universities that “self-funded” their health plans, meaning they used student premiums to cover costs — and accepted responsibility for any large bills that might cost even more. At the time, about 30 universities had such plans.

Most were big institutions with large endowments, such as the University of California, Johns Hopkins and Princeton. Those three, and some others, chose nevertheless to make their self-funded student plans comply with the Affordable Care Act.

But Brigham Young University campuses in Utah, Idaho and Hawaii did not. The university publicly opposed the law’s requirement to cover contraceptives. And its plans limited the maximum annual benefit. At the time, a university spokesman told the campus newspaper in Utah, “There are numerous government-imposed requirements that we don’t believe are necessary to provide good health care to our students.”

The Idaho campus’ plan has a $4,750 deductible that must be met before it will cover maternity care for the spouse of a student. It does not cover certain major medical services, such as residential mental health care and care related to an organ transplant.

These restrictions, along with the premium costs, are central reasons Idaho students with Medicaid coverage object to buying the university’s student plan. “It feels like they’re forcing us into a noncompliant health plan when the one we have is already compliant with Obamacare,” said Amanda Emerson, a 26-year-old student. “They’re making it really difficult to do anything otherwise.”

Deseret Mutual Benefit, the plan administrator, says that limiting benefits helps keep premiums down. “The purpose is to try to provide a plan as inexpensively as possible to the students,” said Andy Almeida, the company’s chief operating officer.

The Idaho campus is the only Brigham Young site that will no longer accept Medicaid as a substitute for the student health plan, a decision that university officials would not explain. The school’s Utah and Hawaii campuses allow students with Medicaid to waive private coverage.

Utah voters agreed to a Medicaid expansion last year, and a partial version of the program took effect in February. The state does not provide data on how many of the 33,000 students at the Provo campus are enrolled in Medicaid. The Hawaii campus has just 2,500 students; the number on Medicaid is not disclosed.

Idaho had long resisted participating in the Affordable Care Act’s expansion of Medicaid, which provides coverage to Americans who earn less than 133% of the federal poverty level ($16,612 for an individual, and $34,248 for a family of four).

The state Legislature twice voted down bills that would have added Idaho to the program, which currently covers 36 states and the District of Columbia. In 2018, local activists secured a ballot initiative on the issue. The proposal passed with a double-digit margin and after a state Supreme Court challenge, the program will start in January.

In announcing its new stance on Medicaid, Brigham Young University-Idaho cited a worry about overwhelming local health care providers. The local hospital, however, said it had no such concerns and had not raised the issue with the university.

“We have some great providers here, and we feel like we’re able to handle any growth that the university and the community would need,” said Doug McBride, executive director of business development at Madison Memorial Hospital, a county-owned facility.

Since the school announced the new policy this month, students have organized Facebook groups and circulated petitions opposing the change.

Emerson, one of the students with Medicaid, is planning to enroll in a private plan in addition to her public coverage. Her husband, also a student at the Idaho campus, plans to do the same. They said they had discussed their options with a local insurance broker and found that the student plan would be the cheapest, but hadn’t yet made a decision.

“We only have a few weeks until we have to be registered for new classes, so this kind of dropped a bomb on us,” Emerson said. “We only have one semester to go, so we’re willing to dip into our savings.”

This article originally appeared in The New York Times.