These are the greatest fears that people have in the world

Around the world, ISIS and climate change are neck-and-neck for the leading threats people perceive today. 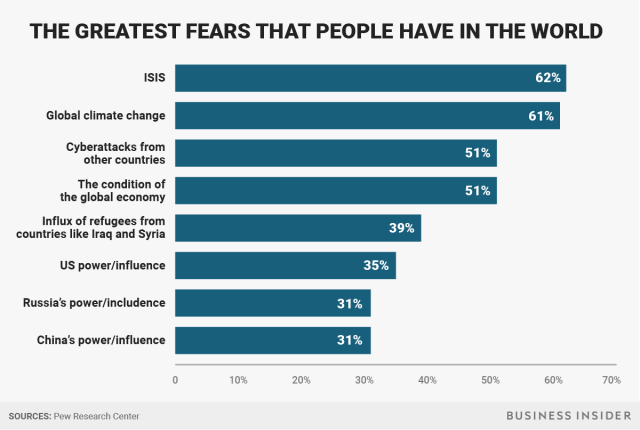 When you look at the results country by country, however, some interesting nuances emerge.

First, the US, most European countries, and Russia see ISIS as the foremost security concern. This was the case last year, as well.

But a growing number of people, particularly those in Africa and the Americas, are now saying that climate change is a bigger threat to them than terrorism, cyber attacks, the refugee crisis, or the economy.

In countries that are hurting economically, like Venezuela and Greece, survey respondents predictably said the condition of the global economy was their biggest concern.

While many Middle Eastern and European countries are still grappling with the worst refugee crisis since World War II, only Hungary listed it as the top threat.

People in South Korea and Vietnam both listed China’s power and influence as the main security issue facing their nations. 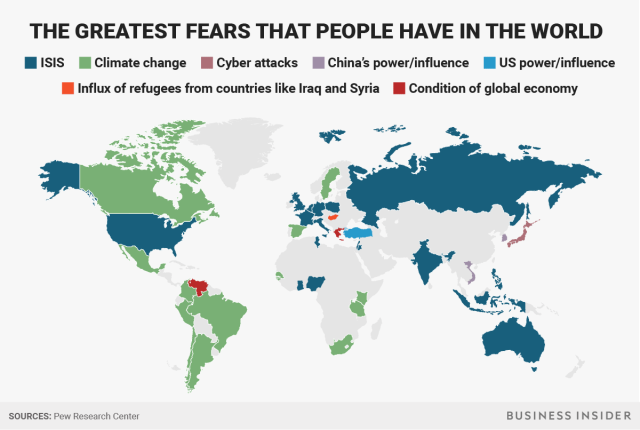 And while it didn’t rank as the top threat for any nation, more people now say they worry about the United States’ power and influence than in previous years before President Donald Trump took office.

Worldwide, only 22% of people said in a separate Pew survey that they have confidence in Trump, compared to 64% when former President Barack Obama was in office. Similarly, 49% now have a favorable view of the US, vs. 64% at the end of Obama’s presidency.