The Secret of the Great American Fracking Bubble 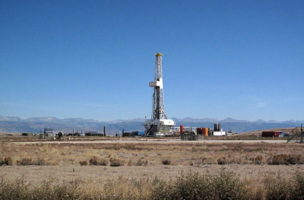 In 2008, Aubrey McClendon was the highest paid Fortune 500 CEO in America, a title he earned taking home $112 million for running Chesapeake Energy. Later dubbed “The Shale King,” he was at the forefront of the oil and gas industry’s next boom, made possible by advances in fracking, which broke open fossil fuels from shale formations around the U.S.

What was McClendon’s secret? Instead of running a company that aimed to sell oil and gas, he was essentially flipping real estate: acquiring leases to drill on land and then reselling them for five to 10 times more, something McClendon explained was a lot more profitable than “trying to produce gas.” But his story may serve as a cautionary tale for an industry that keeps making big promises on borrowed dimes — while its investors begin losing patience, a trend DeSmog will be investigating in an in-depth series over the coming weeks.

From 2008 to 2009, Chesapeake Energy’s stock swung from $64 a share under McClendon to around $17. Today, it’s worth just $3 a share — the same price it was in 2000. A visionary when it came to fracking, McClendon perfected the formula of borrowing money to drive the revolution that reshaped American energy markets.

An Industry Built on Debt

Roughly a decade after McClendon’s rise, the Wall Street Journal reported that “energy companies [since 2007] have spent $280 billion more than they generated from operations on shale investments, according to advisory firm Evercore ISI.”

As a whole, the American fracking experiment has been a financial disaster for many of its investors, who have been plagued by the industry’s heavy borrowing, low returns, and bankruptcies, and the path to becoming profitable is lined with significant potential hurdles. Up to this point, the industry has been drilling the “sweet spots” in the country’s major shale formations, reaching the easiest and most valuable oil first.

But at the same time energy companies are borrowing more money to drill more wells, the sweet spots are drying up, creating a Catch-22 as more drilling drives more debt.

“You have to keep drilling,” David Hughes, a geoscientist and fellow specializing in shale gas and oil production at the Post Carbon Institute, told DeSmog. But he also noted that with most of the sweet spots already drilled, producers are forced to move to less productive areas.

The result? “Productivity goes down and the costs remain the same,” he explained.

While Hughes understands the industry’s rationale for continuing to drill new wells at a loss, he doubts the sustainability of the practice.

“I don’t think in the long-term they can drill their way out of this,” Hughes told DeSmog.

While politicians and the mainstream media tout an American energy “revolution,” it is becoming clear that — like the housing bubble just a few years earlier — the American oil and gas boom spurred by fracking innovations may be one of the largest money-losing endeavors in the nation’s history. And it caught up with McClendon.

In 2016, the shale king was indicted for rigging bids at drilling lease auctions. He died the very next day in a single car crash, leading to speculation McClendon committed suicide, a rumor impossible to confirm. However, the police chief on the scene noted: “There was plenty of opportunity for him to correct and get back on the roadway and that didn’t occur.”

The same could be said of the current shale industry. There is plenty of opportunity for these energy companies to correct their path — for example, by linking CEO pay to company profits rather than oil production volumes — but instead they are plowing full-speed ahead with a business model that seems poised for a crash.

Of course, business media and conservative think tanks are still selling the story that the fracking industry has produced an economic and technical revolution.

In 2017 Investors Business Daily ran an opinion piece with the title, “The Shale Revolution Is A Made-In-America Success Story.” It was authored by Mark Perry of the American Enterprise Institute — a free market-focused think tank funded in part by the oil and gas industry.

How does the author measure success? Not via profits. The metric Perry uses to argue the success of the fracking industry is production volume. And it is true that the volumes of oil produced by fracking shale are increasing and currently at record levels. But here is the catch — when you lose money on each barrel of oil you pump and sell — the more you pump, the more money you lose. While it is true that the industry has been successful at getting oil out of the ground, its companies have mostly lost money doing it.

However, much like with the U.S. housing boom, this false narrative persists that the fracking industry is a money-making, rather than money-losing, venture.

A Wall Street Journal headline published in early 2018 projected this eternal optimism about the fracking industry: “Frackers Could Make More Money Than Ever in 2018, If They Don’t Blow It.”

This headline manages to be, at the same time, both very misleading and true. Misleading because the industry has never made money. True because if oil and gas companies make any money fracking in 2018, it would be more “than ever.”

However, the nuance comes in the sub-headline: “U.S. shale companies are poised to make real money this year for the first time since the start of the fracking boom.”

In March 2017, The Economist wrote about the finances of the fracking industry, pointing out just how much money these businesses are burning through:

With the exception of airlines, Chinese state enterprises, and Silicon Valley unicorns — private firms valued at more than $1 billion — shale firms are on an unparalleled money-losing streak. About $11 billion was torched in the latest quarter, as capital expenditures exceeded cashflows. The cash-burn rate may well rise again this year.

Some historic money-losing has been going on, and is expected to continue, as reported by the Wall Street Journal: “Wood Mackenzie estimates that if oil prices hover around $50, shale companies won’t generate positive cash flow as a group until 2020.” However, Craig McMahon, senior vice president at Wood MacKenzie, notes, “Even then, only the most efficient operators will do well.”

In the introduction to The Big Short, Michael Lewis’ book-turned-movie about how the 2008 financial crash unfolded, he describes the finances of the housing bubble:

“All these subprime lending companies were growing so rapidly, and using such goofy accounting, that they could mask the fact that they had no real earnings, just illusory, accounting-driven, ones. They had the essential feature of a Ponzi scheme: To maintain the fiction that they were profitable enterprises, they needed more and more capital to create more and more subprime loans.”

If you substitute “shale oil and gas development companies” for “subprime lending companies,” it becomes an apt description of the current shale industry. These companies are losing more money than they make and can only sustain this scenario if lenders continue to bankroll their efforts, allowing the fracking industry to drill more wells as it points to production increases, rather than profits, as progress. Which — for now — Wall Street continues to do in a big way.

This article is the first in a series investigating the economics of fracking and where the vast sums of money being pumped into this industry are actually going. The series will look at how fracking companies are shifting these epic losses to the American taxpayers. It will review the huge challenges facing the industry even if oil and gas prices rise: the physical production limits of fracked wells, rising interest rates, rising water costs, competition from renewables, OPEC’s plans, and what happens if Wall Street stops loaning it money.

The oil industry has always been a boom or bust industry. And during each boom someone inevitably declares that “this time is different,” assuring everyone there won’t be a bust. The sentiment about the early 2000s housing bubble was much the same, with critics being drowned out by the players claiming that, this time it was different, arguing “Housing doesn’t go down in value.”

And what about for shale production? Is this time really different? Some in the industry apparently think so.

“Is this time going to be different? I think yes, a little bit,” energy asset manager Will Riley told the Wall Street Journal. “Companies will look to increase growth a little, but at a more moderate pace.” There is little evidence of restraint or moderation in the industry. Until analysts and investors start talking about profits instead of growth, however, this time is likely to end, at some point, in a completely familiar and predictable way: bust. A fate even Aubrey McClendon, the highest-paid CEO, the shale king, eventually met.

David Hughes summed up his take on the industry’s financial outlook: “Ultimately, you hit the wall. It’s just a question of time.”