He has a terminal illness. He’s on government healthcare. But he’s a Republican. 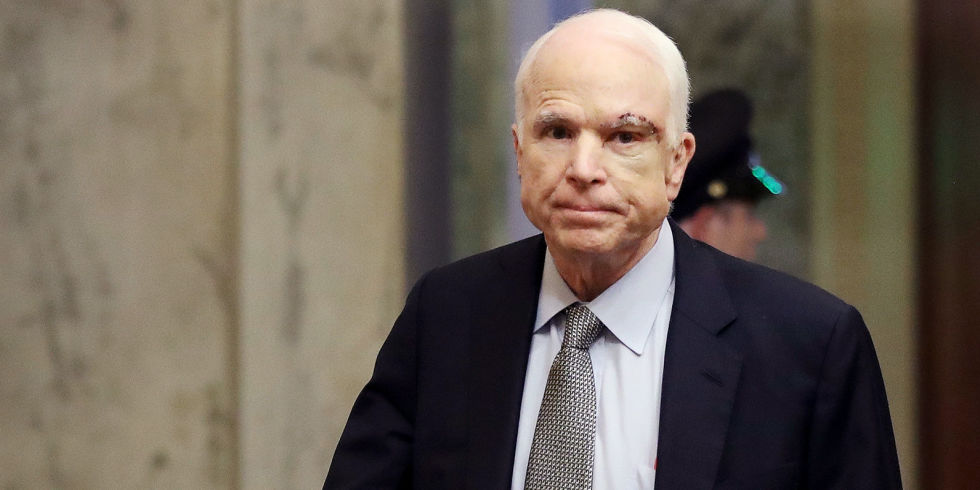 WASHINGTON—It was an ugly day in the United States Senate on Tuesday, as ugly a day as has been seen in that chamber since the death of Strom Thurmond, who used to make a day ugly simply by showing up. The Senate took up the Motion To Proceed on whatever the hell hash Mitch McConnell wants to make out of the American healthcare system. (The decision now seems to be between whether we kick 30 million, 22 million, or 18 million of our fellow citizens to the curb.) There was a loud protest in the Senate gallery, and the Capitol police, who were everywhere, went out of their way to prevent any media coverage of the ensuing arrests. (In this, they were helped immeasurably by a bunch of little omadhauns from the office of the Senate sergeant-at-arms, one of whom was so insufferable that he was even money to get thrown out a window.) That was really ugly.

The vote was 51-50, with Vice President Mike Pence breaking the tie. Back when he was becoming the very unpopular governor of Indiana, Mike Pence grabbed the Affordable Care Act’s Medicaid expansion with both hands. Now, he was the deciding vote in the first real test of whether the Republican congressional majorities will eviscerate Medicaid entirely. That was really ugly, too.

But the ugliest thing to witness on a very ugly day in the United States Senate was what John McCain did to what was left of his legacy as a national figure. He flew all the way across the country, leaving his high-end government healthcare behind in Arizona, in order to cast the deciding vote to allow debate on whatever ghastly critter emerges from what has been an utterly undemocratic process. He flew all the way across the country in order to facilitate the process of denying to millions of Americans the kind of medical treatment that is keeping him alive, and to do so at the behest of a president* who mocked McCain’s undeniable military heroism. 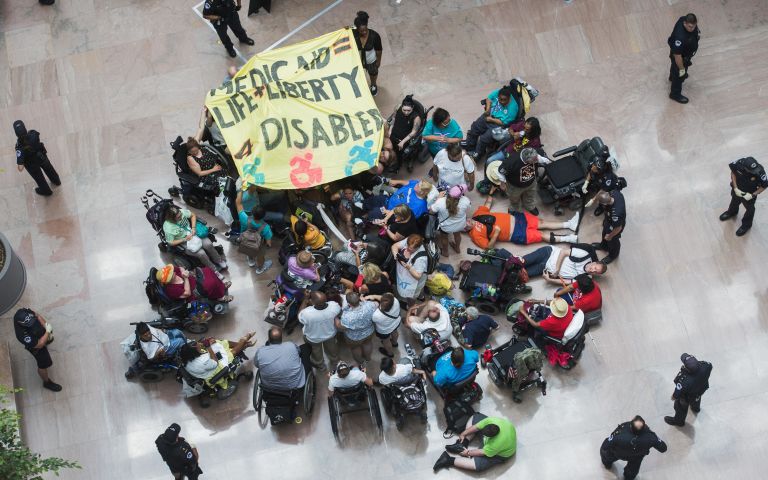 For longtime McCain watchers, and I count myself as one of them, this is something of a pattern. In 2000, George W. Bush’s campaign slandered him and his young daughter, and radical fundamentalist Christians joined in so eagerly that McCain delivered the best speech of his career, calling those people “agents of intolerance.” By 2006, he was on Meet The Press, which ultimately always was the constituency he cared most about, saying that the late Jerry Falwell was no longer an agent of intolerance. He was hugging Bush, and he was speaking at Liberty University. All of this seems to support the theory that the best way to win over John McCain is to treat him as badly as possible.

So he got a standing ovation when he walked into the chamber, and that was all right, and then he cast the vote to proceed. And then, having done so, he climbed onto his high horse and delivered an address every word of which was belied by the simple “yes” he had traveled so far to cast.

“Our deliberations today – not just our debates, but the exercise of all our responsibilities – authorizing government policies, appropriating the funds to implement them, exercising our advice and consent role – are often lively and interesting. They can be sincere and principled. But they are more partisan, more tribal more of the time than any other time I remember. Our deliberations can still be important and useful, but I think we’d all agree they haven’t been overburdened by greatness lately. And right now they aren’t producing much for the American people. “Both sides have let this happen. Let’s leave the history of who shot first to the historians. I suspect they’ll find we all conspired in our decline – either by deliberate actions or neglect. We’ve all played some role in it. Certainly I have. Sometimes, I’ve let my passion rule my reason. Sometimes, I made it harder to find common ground because of something harsh I said to a colleague. Sometimes, I wanted to win more for the sake of winning than to achieve a contested policy.”

His “yes” won the day for a secret process that produced a bill that nobody’s seen yet.

“Let’s trust each other. Let’s return to regular order. We’ve been spinning our wheels on too many important issues because we keep trying to find a way to win without help from across the aisle. That’s an approach that’s been employed by both sides, mandating legislation from the top down, without any support from the other side, with all the parliamentary maneuvers that requires.”

He could have struck a blow for these noble sentiments—and, most notably, for “regular order”—by voting no. It would have been the most resounding vote of his long career. But he said, “yes.”

“I voted for the motion to proceed to allow debate to continue and amendments to be offered. I will not vote for the bill as it is today. It’s a shell of a bill right now. We all know that. I have changes urged by my state’s governor that will have to be included to earn my support for final passage of any bill. I know many of you will have to see the bill changed substantially for you to support it. We’ve tried to do this by coming up with a proposal behind closed doors in consultation with the administration, then springing it on skeptical members, trying to convince them it’s better than nothing, asking us to swallow our doubts and force it past a unified opposition. I don’t think that is going to work in the end. And it probably shouldn’t.”

God, this is gorge-inducing. Alone, he could’ve stopped the process he so dislikes in its tracks. He could’ve done it in a way that echoed through the ages. But he said, “yes.”

“The Obama administration and congressional Democrats shouldn’t have forced through Congress without any opposition support a social and economic change as massive as Obamacare. And we shouldn’t do the same with ours.”

Alas, this is an absolute lie, and an embarrassing one, and the Straight Talk Express is in the ditch. The Affordable Care Act was the product of endless hearings and at least 100 amendments proposed by Republicans. It was scored by the CBO. The Senate debated it for almost a month, and the senators knew what was in it. Right now, the bill that John McCain facilitated likely will be one that isn’t scored by the CBO, and the Freedom Caucus crackpots in the House are trying to defund the CBO and hand the job of scoring legislation to the Heritage Foundation. I would bet a substantial number of buffalo nickels that John McCain votes for whatever bill finally comes before him, no matter how many people’s lives that bill makes miserable. 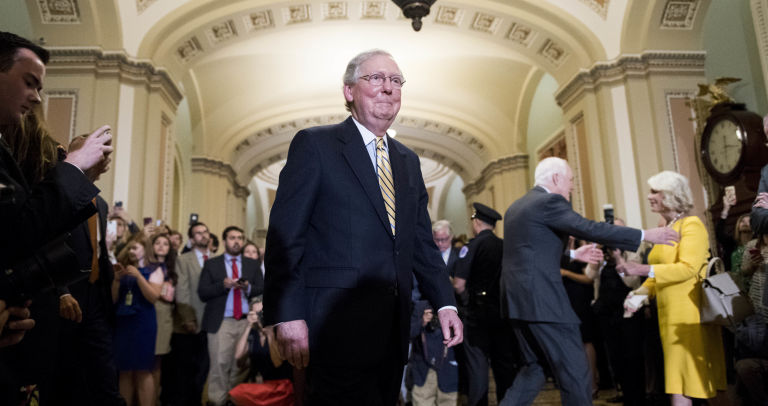 I wanted this to be different. In 2000, I thought McCain might be the person to lead his party back to marginal sanity at least. But he wanted to be president, so he became like all the rest of them. Yes, he scolded that person who said Barack Obama was a Muslim, but he chose as his running mate a nutty person who still may believe he is. Yes, he put his name on a campaign finance reform bill, but he also voted for every member of the Supreme Court who subsequently eviscerated that law, and others like it, and he’s been absent from that fight ever since. There have been very few senators as loyal to the party line as John McCain. He has been a great lost opportunity to the country. Now, he will end his career as the face of whatever wretchedness is brought on the country by whatever the bill finally is.

By the end of the afternoon, the Democrats had taken over one of the wide marble staircases outside the Capitol. They had walked across the piazza and onto the East Lawn of the Capitol to talk to some protesters, many of whom are struggling with diseases and disabilities that would be covered under the Affordable Care Act, and certainly under the Cadillac healthcare plan enjoyed by John McCain. It was a nice gesture, and they were warmly received, but there was something of the stunt to it.

The Republicans have the votes now. Dean Heller and Rob Portman and Shelley Moore Capito have lined up with their party once, and the likelihood is their respective prices will be met again because this is not a policy issue any more, it is pure politics now, a promise made by an extremist majority to its unthinking base. That’s what the end of this ugly day looked like, a day on which the final bloody death of Barack Obama’s legacy was placed on the fast track by people who know better, and on which Susan Collins of Maine was more of a maverick than John McCain ever was. It was an ugly day in the U.S. Senate, and there was nothing but ruin everywhere you looked.