The census data has bad news for Black and Latinx Americans

Across the country families are getting wealthier, but rosy coverage of new census figures is hiding an alarming fact.

New Census Bureau data shows an increasingly optimistic picture for white Americans — but far less so for Americans of color, many of whom still face stark income disparities.

Released Tuesday, the numbers appear to show good news across the board in several key areas. Median household income in the United States in 2016 was $59,039 — a more than three percent rise from 2015 and the highest ever recorded. Poverty also saw a dip, as did the number of people without health insurance. The Census Bureau said that data reflects both a return to pre-recession levels, with 2.5 million people no longer living in poverty, and a precarious drop in the number of uninsured Americans, now around 8.8 percent of the population.

But the figures also show a grim reality. While white families now earn an average income of around $65,041, that picture is far less rosy for other racial demographics. Hispanic families earn around $47,675 — considerably lower than the over-arching average, $59,039. Worse off are Black families, who earn a median of $39,490, more than $25,000 less than their white counterparts. (The top earners, bringing in around $81,431 per year, are families identified as Asian, a broad demographic including those with origins across much of the Asian continent but outside of the Middle East.) Those numbers are despite the fact that medians for both Black and Hispanic households grew at twice the rate of white households in 2016.

The Census Bureau told ThinkProgress that no reason could be given for the gaps, and commentary could only be offered on the figures and trends. But experts and economists highlighted the data on social media, pointing to the numbers as a disconcerting sign that the figures reinforce income inequality in a damning way, one that also cuts along gendered lines. Janelle Jones, an economic analyst with the Economic Policy Institute, noted on Twitter that “earnings actually DECREASED for black women and Latinas” while they rose for white women (women of all races are still out-earned significantly by their male counterparts): 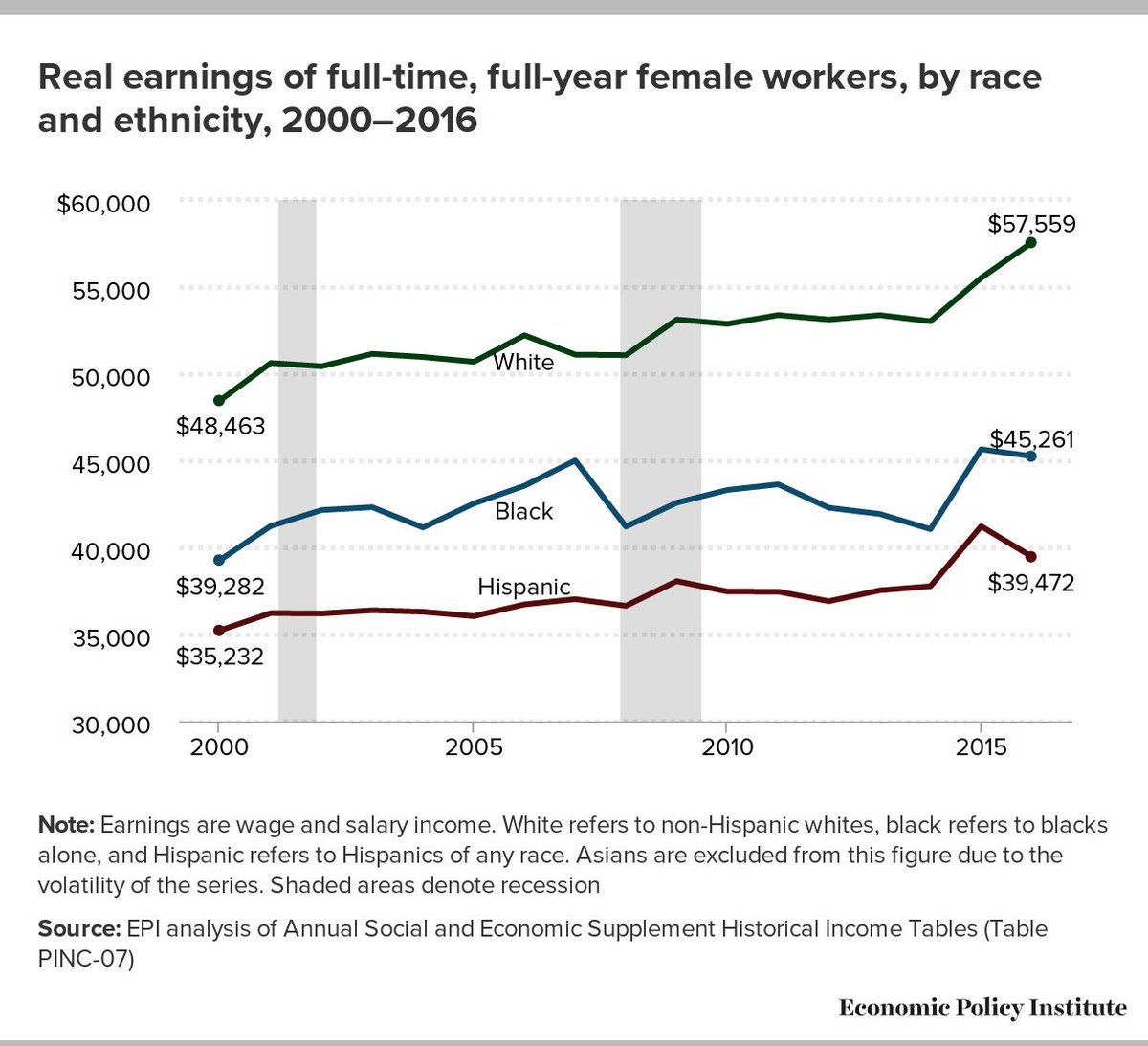 While the figures alone are striking, they aren’t the only indicator that the United States has a severe economic inequality issue. According to a new study by Prosperity Now and the Institute for Policy Studies, wealth trends for Black and Latinx families are dwindling, even as the United States becomes increasingly less white demographically. If the study is correct, the median wealth for Black families will be $0 by 2053; two decades later, Latinx families are expected to reach the same number.

Wealth is about more than income — assets and ownership are an important component of how wealth is determined. But the study still points at an increasingly pressing issue. Projections indicate the United States will be majority non-white by 2044; if trends continue as they are now, that could mean serious repercussions for the U.S. economy, which will suffer along with many communities of color.

This is all part of an enduring legacy, Dedrick Asante-Muhammad, a senior fellow at Prosperity Now, told The Guardian.

Interpretations of Tuesday’s census figures have in many ways overlooked this reality. With much of U.S. focus directed on the country’s middle class, any growth within that group is seen as positive. But for Black and Latinx people, the story becomes more complicated, both because they are paid less than white counterparts, and because white families are more likely to have access to pre-existing wealth and assets.

“You find first-generation, even second-generation African-American and Latino households that have professional jobs and are making ‘middle-income money’ – but they have the wealth of a white high-school dropout,” said Asante-Muhammad. “They’re not truly part of a middle class – which would mean financial stability, money to weather challenging economic situations, or money to invest in the economic opportunities of their children.”

That reality is one that might not be addressed any time soon. In addition to reinforcing pre-existing racial income inequality, census figures also point at another jarring trend — the rich are getting richer more generally, while the poorest households have an even smaller income than before. That’s not a good sign for Americans of color already at a disadvantage, or a positive sign that dramatic shifts could be coming.

Even those welcoming the census data were quick to note that the figures reflect a reality prior to the election of President Donald Trump. The president’s policy proposals, which aim to roll back things like food stamp funding, and wide-scale legislative efforts, like unraveling the Affordable Care Act, could have a dramatic impact on the growth measured in 2016.

That’s something Americans should watch out for, Peter Atwater, president of Financial Insyghts, told the Washington Post.

“There’s a danger that this is as good as it gets,” he said.