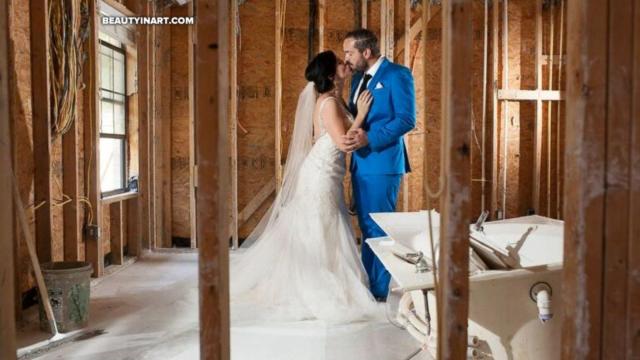 Shellie Schoellkopf and Robert Callaway, both Houston natives, planned to hold their wedding reception next month for 150 guests at a restaurant in downtown Houston. Then, Hurricane Harvey, the most powerful storm to hit Texas in over a decade, happened.

The couple, both 33, immediately opened their home to relatives whose home destroyed by Harvey’s floodwaters. They also helped close family friends demolish the first floor of their flood-ravaged home so they can begin to rebuild.

As Schoellkopf and Callaway looked at the guest list for their Oct. 7 wedding, they saw that nearly everyone was affected by Harvey, which dumped more than 20 trillion gallons of rain across Texas and Louisiana. 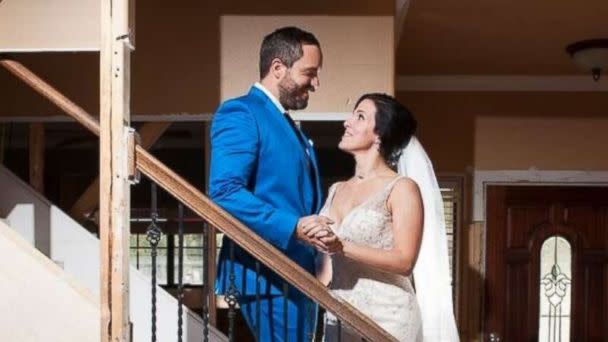 “When the sun finally emerged, we went and sat on the back patio to try to figure out what we wanted to do,” said Schoellkopf whose home about 30 minutes outside of Houston did not sustain major damage. “Looking down at our list, it was every third or fourth person that had some sort of damage.”

She continued, “We were talking about how many of the people on our list were uninsured because they didn’t live in flood zones, and we decided to give the money directly to them.”

Schoellkopf and Callaway plan to hold their marriage ceremony in a Houston church, but the $5,000 they were planning to use for their reception will now be donated to three of their closest family members and friends who lost their homes in the storm.

“We recognize it’s not this grand amount that some other couples spend on their wedding, but it’s still more than we’d be able to give if we hadn’t done it,” Schoellkopf told ABC News. “Our guests have been really supportive of our decision.”

The couple’s reception venue, a restaurant in Houston, waived the cancellation fee.

“When it comes down to it, we could pay for our reception, but we just want to put this money towards something else,” said Schoellkopf who has also started a Venmo account with her fiancé to try to raise more money for their family and friends affected by Harvey.

Since they won’t have a wedding reception and because so much of their lives right now are involved with rebuilding after Harvey, Schoellkopf and Callaway decided to take their wedding photos inside a flooded home in Baytown that they have been helping friends rebuild. 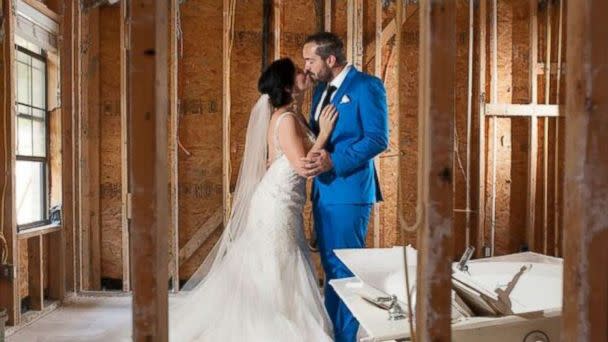 The couple’s wedding photographer, Bryan Anderson, evacuated from his flooded home with only a travel bag, his camera and two hard drives with wedding photos.

“Doing the shoot with Shellie and Robert felt like a wedding and beautiful, though not in traditionally scenic location,” he told ABC News. “It was great to be a part of their life and to remember where their money for their reception went.”

Across Texas and around the country, people are reaching out to brides-to-be who may have had their wedding dresses, decorations or venue ruined by Harvey.

Larissa Nixon Sloan, 36, was married last month in her hometown of Perkins, Oklahoma. 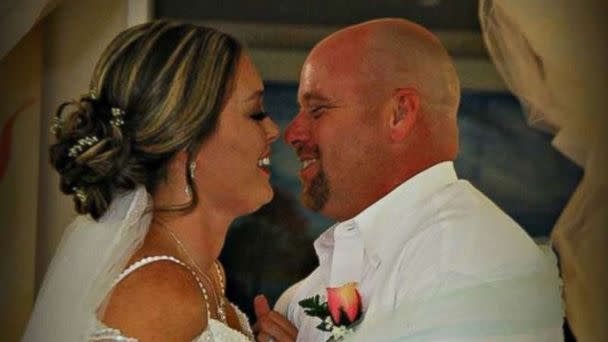 The new bride had been planning to sell her leftover wedding decorations, including tablecloths, centerpieces, candles and more, online.

After seeing the devastation of Harvey, she is now offering the decorations for free to brides-to-be affected by the storm. 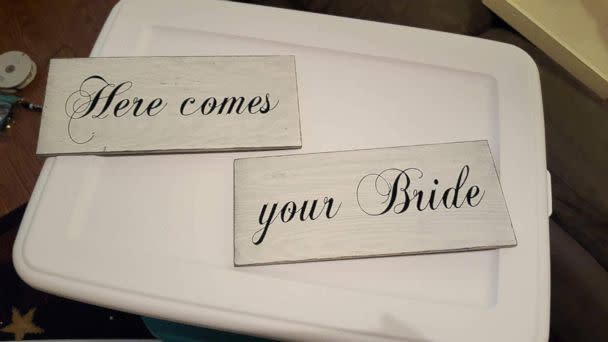 “Being a recent bride myself, I understand that it’s one day that is your special day that you plan on, maybe from even as a little girl,” she told ABC News. “There’s women who have worked tirelessly like I had and now all their hard work is gone.”

On Reddit, a subthread was quickly started after Harvey specifically for women who want to donate their wedding dresses and decorations to affected brides-to-be.

Connie, a 25-year-old Houston resident who is getting married in February, lost her wedding veil due to flooding. She believes her dress survived intact at a local boutique, but was touched when she saw the generosity extended to her city online.

“I was basically on Reddit the entire time during the storm because the Houston subreddit was like a lifeline,” said Connie, who asked that her last name not be used. She said she was trapped inside her home for days due to flooding.

“A wedding dress is a really kind of emotional thing,” Connie added. “So for these people to put their dresses online and give them to strangers whose houses are underwater, it was really touching.”

Two former strangers, Hailey Ricks and Brandi Ganz, have come together to organize a benefit for brides-to-be whose dresses and decorations were either damaged or lost forever during Harvey’s wrath.

Ricks, a 27-year-old Houston-area wedding planner, first began helping brides-to-be after Harvey by driving across the Houston area to pick up donated wedding gowns and storing them at her house. She has also been working with local venues to find locations for displaced brides-to-be.

“I’ve been doing this for almost eight years and it’s not just a job for me, it’s a passion. I cry at every wedding still and I’ve done over 100 weddings,” she said. “I just couldn’t really sit back and watch all these brides have their special day ruined.”

She and Ganz, who is getting married in December, are organizing a cocktail party that will occur later this month that will include a donation drive, a raffle with wedding-related prizes and opportunities for brides-to-be to pick out new dresses.

Ticket sales from the event, named the Veil or High Water Charity Party, will be donated to charities helping people affected by Harvey.

Ganz, 22, a behavioral therapist in Richmond, Texas, was inspired to organize for brides-to-be after meeting an engaged fireman who was helping people affected by Harvey while his own home had been ruined.

“It just felt like there were going to be a lot of brides who wouldn’t get help if we didn’t come together,” she said, adding that she believes focusing on a wedding day in the midst of such devastation is not an extravagance, but a necessity.

“My feeling is that’s exactly what you should do,” she said. “You should proceed with the things that will make you happy and bring your family and friends together, even in spite of the tragedy.”