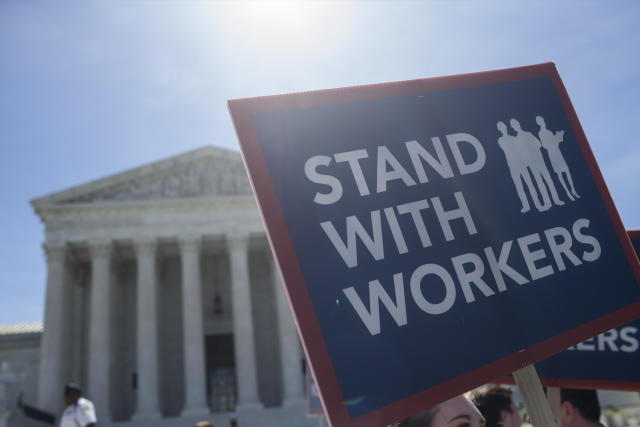 The radical conservatives on the U.S. Supreme Court have twice now in two months ganged up on working Americans, denying them their right to band together to achieve mutual goals.

Last month, the extremist court majority sided with big business to deprive workers of the right to sue collectively in class actions to redress violations like wage theft. This time, the same majority ruled against workers who organize themselves into unions, divesting public sector union members of the right to collect fair share fees from co-workers who don’t join but do receive all the benefits of union-negotiated contracts.

This is regression for the nation’s workers. In lockstep with the Trump administration and congressional conservatives, the high court’s right-wingers are shoving workers back to an earlier era, a time when corporations held all of the power and when workers, in what was supposed to be a free society, were in fact denied liberty.

Ideally, in the country that fought a war to rid itself of royal overlords, workers have the freedom to change jobs, even professions, to move across the country for better opportunities, to unite with co-workers, and to bargain collectively with corporations for better pay and benefits for the whole group.

But when money, and the power it spawns, are concentrated in the hands of a few, as it was with British royalty, these liberties are stripped from the majority. Indebtedness forecloses options to the ill-paid. The radical conservative cell on the Supreme Court is denying workers the tools that are vital for improving pay.

Labor unions are one of those tools.

Not that long ago, workers in this country were damned. Vast numbers were trapped. And so were their children and grandchildren. They had no way to achieve the liberty promised by their democracy. That is because they barely subsisted as wage slaves.

This included coal miners and textile workers and sharecroppers who lived in company-owned hovels and received company scrip, not U.S. currency, as pay. Though they worked 12-hour days, six days a week, they could never get ahead as owners raised rents and fees in the company store. Somehow, the sweat of their brow left them swamped in debt. 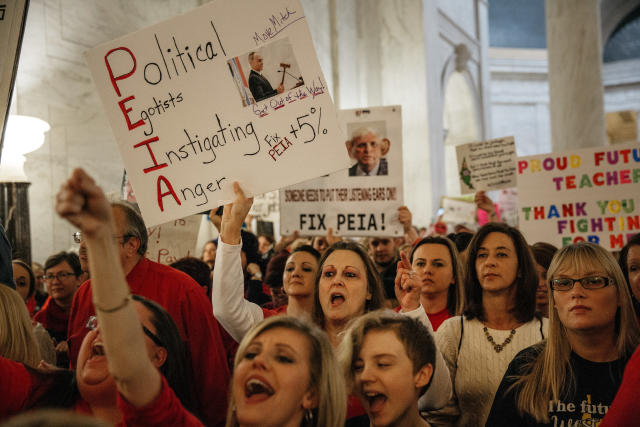 For coal miners, the change agent was the United Mine Workers of America. Instead of individuals pleading with wealthy coal field barons for a better wage, the workers banded together under the UMWA banner and collectively sought more pay. If owners still refused, the workers, together as a unit, could shut down the mine until owners relented. And they did.

No individual has that clout. Only the group does. The wealthy mine owners objected to workers realizing and wielding this power, of course, and did everything they could to outlaw and destroy labor unions.

During Democratic President Franklin Delano Roosevelt’s first term, a Democratic Congress passed the National Labor Relations Act to provide a clear legal pathway to collective bargaining. Union membership increased dramatically for the next 25 years until approximately 30 percent of all workers were members. During this time, workers’ wages rose in tandem with productivity. America’s great middle class was born and thrived.

By contrast, as the percentage of American workers represented by labor unions declined over the past 40 years, workers’ wages stagnated, even as productivity rose. Even though more public sector workers gained the right to unionize in the late 1950s, union density overall declined steadily after 1960.

Union representation shrank as legislation, regulation and Supreme Court decisions like the one issued Wednesday made collective bargaining increasingly difficult.

As soon as Republicans took over Congress in 1946, they moved to restrict workers’ bargaining rights, passing the Taft-Hartley Act in 1947. Still, the rate of union membership continued to rise until 1960, after which it declined steadily to 10.7 percent last year. Even with those small numbers, union workers continue to earn about 20 percent more than those who don’t collectively bargain.

The high court’s decision in the case of Janus v. American Federation of State, County and Municipal Employees, Council 31, could eviscerate public sector unions ― those representing government workers such as teachers, firemen and pollution monitors. Government workers are significantly more likely to be represented by unions than are private sector workers. And, of course, union extinction is the intent of both the right-wing organizations that bankrolled Janus and the right-wing jurists who decided it.

Unions must represent every worker within a unit. So, for example, the American Federation of Teachers is obliged to serve every educator in a school district, seeking better wages and working conditions for the entire group, filing grievances and hiring lawyers to pursue those cases even for instructors who choose not to join the AFT.

Until now, in 22 states with legislation supporting workers’ rights, unions could charge nonmembers fair share fees ― amounts lower than dues ― to cover the costs of bargaining for them. In the Janus ruling, the Supreme Court’s conservatives said it was unlawful to collect those fees for public sector unions without the worker giving explicit consent. The upshot is this: The court’s radical conservatives have ordered union members to pay for services for nonmembers.

Such a system is sustainable only if the vast majority of workers in a unit choose not to shirk responsibility to the group. The union I lead, the United Steelworkers does have viable local unions in states that even before the Janus decision prohibited fair share fees.

But the union-hating conservative groups behind the Janus case have already launched a massive campaign to persuade public sector union members to quit and get free union services. This is destruction by subtraction. Backed by billionaires, these groups have the luxury of big bucks and unlimited time to pick off members, one by one, until a tipping point when the local union no longer has sufficient income to provide decent service and collapses.

Then, of course, no one gets services. No one will file a grievance for the teacher’s aide ordered by a principal to work an extra hour each day without pay. No one will conduct research and collectively bargain a labor agreement that will provide these highly educated professionals with decent pay and benefits. Compensation will fall. Fewer talented young people will choose teaching as a profession. The nation’s public schoolchildren will suffer.

And the rich will pay less in taxes. That’s exactly what radical right-wingers demand: less government, less taxes. Schoolchildren be damned! And their non-rich parents too.