Solar power grew faster than any other source of fuel for the first time in 2016, the International Energy Agency said in a report suggesting the technology will dominate renewables in the years ahead.

The institution established after the first major oil crisis in 1973 said 165 gigawatts of renewables were completed last year, which was two-thirds of the net expansion in electricity supply. Solar powered by photovoltaics, or PVs, grew by 50 percent, with almost half of new plants built in China.

“What we are witnessing is the birth of a new era in solar PV,” Fatih Birol, executive director of the IEA, said in a statement accompanying the report published on Wednesday in Paris. “We expect that solar PV capacity growth will be higher than any other renewable technology through 2022.” 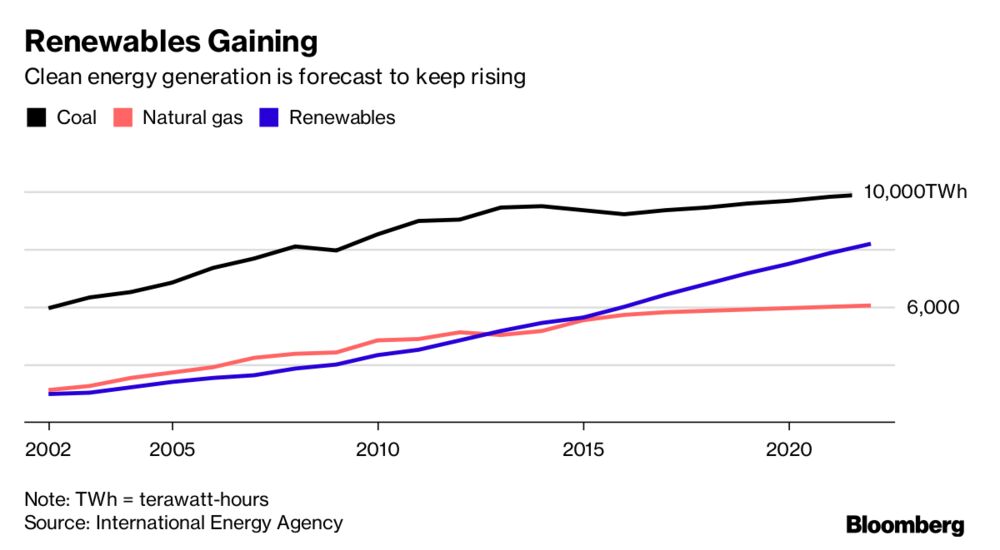 This marks the sixth consecutive year that clean energy has set records for installations. Mass manufacturing and a switch by governments away from fixed payments for renewables forced down the cost of wind and solar technology.

The IEA expects about 1,000 gigawatts of renewables will be installed in the next five years, a milestone that coal only accomplished after 80 years. That quantity of electricity surpasses what’s consumed in China, India and Germany combined.

The surge of photovoltaics in China is largely due to government support for renewables, which are being demanded by a population concerned about air pollution and environmental degradation that has led to deadly smogs. The country is seeking to reduce its reliance on coal and has become the world’s largest market for renewables, particularly solar.

“The solar PV story is a Chinese story,” said Paolo Frankl, head of the IEA’s renewable energy division. “China has been for a long time the leader in manufacturing. What’s new is the share in the market. This year, it was equivalent to the total installed capacity of PV in Germany.”

The U.S. and India are among other nations pushing renewables. They along with China are projected to make up two-thirds of the clean-energy expansion worldwide. Despite President Donald Trump’s vow to bolster coal’s position in the power market, the U.S. is expected to be the second-largest market for renewables.

The IEA also expects biofuels to take a larger role in the transportation industry, surpassing gains by electric vehicles.

“A lot of attention has been given in recent months to electric vehicles, and rightly so. They are increasingly globally, exponentially,” Frankl said. “But I have to say, we should not forget the biofuels, which at the end of 2016 represented 96 percent of total renewable transport.”

Electric vehicles numbers will double by 2022, but biofuels will still make up 93 percent of renewables consumed in the transport industry, the IEA estimates. The fuels are needed especially for heavier vehicles including planes and ships.

The organization recommends that governments put incentives in place to spur the development of biofuels made from non-edible plants, which would avoid diverting food crops into fuel tanks. The cost of biofuels currently is about double the global price of gasoline, Frankl said.