Not surprising that Republi-cons botched their rushed, tossed together tax bill. They are neither capable nor interested in governing effectively or crafting legislation that solves financial crisis’ for America’s middle class. Their goal was simply payback to the rich and powerful. Even a quick glance at the winners in the bill, mirrors the list of donors to Trump Inc. and the congressional GOP, not America’s other 98% or beguiled Trump voters.              John Hanno

Senate Republicans Made a $289 Billion Mistake in the Handwritten Tax Bill They Passed at 2 a.m. Go Figure. 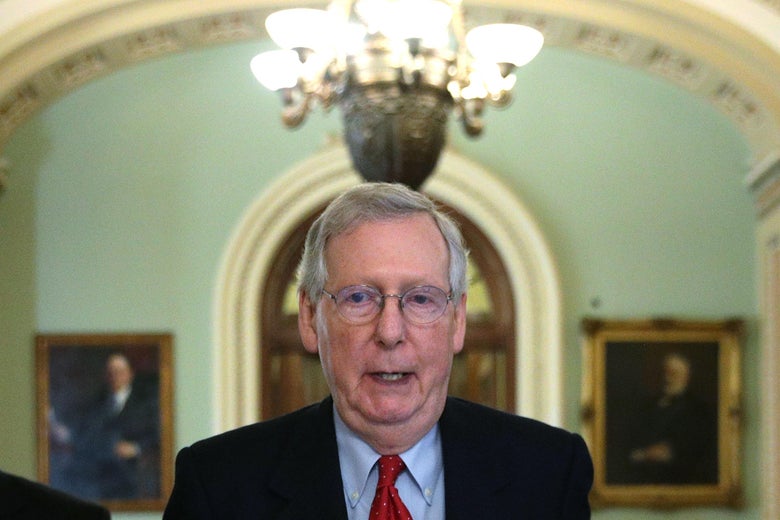 It appears that Senate Republicans managed to make a $289 billion or so mistake while furiously hand-scribbling edits onto the tax bill they passed in the wee hours of Saturday morning. The problem involves the corporate alternative minimum tax, which the GOP initially planned to repeal, but tossed back into their stew at the last second in order to raise some desperately needed revenue. The AMT is basically a parallel tax code meant to prevent companies from zeroing out their IRS bills. It doesn’t allow businesses to take as many tax breaks but, in theory, is also supposed to have a lower rate.

Except not under the Senate bill. When Mitch McConnell & co. revived the AMT, they absentmindedly left it at its current rate of 20 percent, the same as the new, lower rate of the corporate income tax that the bill included. As a result, many companies won’t be able to use tax breaks that were supposed to be preserved in the legislation, including the extremely popular credit for research and development costs. Corporate accountants started freaking out about this over the weekend, but the situation reached high farce when a group of lawyers from Davis Polk pointed out that, by leaving the AMT intact, Republicans had essentially undermined their bill’s most important changes to the international tax code.

Without getting too stuck in the weeds, the GOP’s bill was supposed to take the U.S. from a “worldwide” system of taxation, where the IRS tries to take a cut of profits American companies earn anywhere on the globe, to a modified “territorial” system, where companies could bring back their profits either tax-free or at a much lower rate. With the AMT still kicking around at 20 percent, though, “the United States would continue to operate under a worldwide system of taxation,” the lawyers wrote.

Keeping the AMT was supposed to raise $40 billion, but that already appears to be a gross underestimate. (The figure came from Congress’ Joint Committee on Taxation, whose analysts I can only assume were running on Red Bull and fumes while trying to provide the GOP with last-minute scores.) NYU Law professor and tax expert Lily Batchelder concludes that the AMT will actually cost companies at least $329 billion—good for limiting the blow to the deficit, bad for the corporations who are supposed to be stumping for this legislative Frankenstein—just based on the value of the R&D credits and international exemptions that have been rendered useless.

Appears corporate AMT provision probably raises >$300B, not $40B JCT estimated under duress Fri night. This means Rs have to take Senate bill to conference and can’t just have House pass it, unless they want to *really* piss off bus community. 1/5

Appears corporate AMT provision probably raises >$300B, not $40B JCT estimated under duress Fri night. This means Rs have to take Senate bill to conference and can’t just have House pass it, unless they want to *really* piss off bus community. 1/5

And corporate AMT provision does a lot more than this, so even $300B is probably low-balling. 3/5

When I talked to Batchelder briefly on the phone Tuesday night, she pointed out that while the GOP’s AMT debacle would end up raising more money than expected, there are almost certainly other, undiscovered mistakes in the bill that would lose revenue. “I think this evidences what can go wrong when you try to pass massive tax reform this quickly,” she said.

On the bright side, this mammoth screw-up will make it harder for the House to simply pass the Senate’s bill if the GOP’s conference committee hits a wall. Republicans have to enact something that fixes this, lest they tick off the very donors this legislation was meant to appease.

You depend on Slate for sharp, distinctive coverage of the latest developments in politics and culture. Now we need to ask for your support.

Our work is more urgent than ever and is reaching more readers—but online advertising revenues don’t fully cover our costs, and we don’t have print subscribers to help keep us afloat. So we need your help. If you think Slate’s work matters, become a Slate Plus member. You’ll get exclusive members-only content and a suite of great benefits—and you’ll help secure Slate’s future. Join Slate Plus