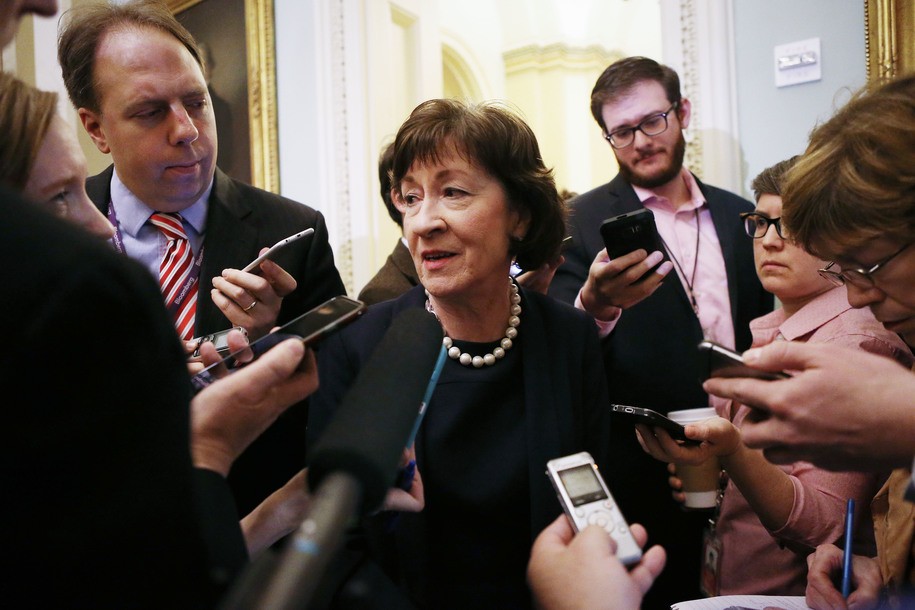 Maine Sen. Susan Collins was a critical single vote on the disastrous Republican tax bill. She pretended for days that she was holding out for promises from Mitch McConnell on legislation she had to see pass in return for her vote—promises she knew McConnell wasn’t in a position to make. Let any speculation about whether Collins was acting in good faith in these negotiations end now. She has proven that when it comes to tax cuts for the donor class, she’ll lie to America with the best of them.

On Meet the Press Sunday, Chuck Todd asked Susan Collins how she could support a huge tax cut after having complained about excessive debt. “Economic growth produces more revenue and that will help to offset this tax cut and actually lower the debt,” she calmly replied. An incredulous Todd asked Collins how she could defend such a claim when every study has concluded the opposite. She cited Glenn Hubbard, Larry Lindsey, and Douglas Holtz-Eakin.

Jennifer Rubin got hold of two of the three, Hubbard and Holtz-Eakin. Both economists denied having ever claimed the Republican tax cuts would produce enough growth to recoup the lost revenue.

She’s now reaping the reward for her vote in Maine. When she returned back home after helping kill Trumpcare in the Senate, she was greeted as a hero at the airport. After this vote, she was greeted by protesters who stood with their backs to her. The protests are not letting up, as protesters basically took over her Bangor office, with an electrician, a nurse, a senior, and a veteran getting arrested when her staff complained to police. That’s not going to make for very good headlines for her back home. Since the protesters vow to continue their efforts until they secure her “no” vote when the bill goes back to the Senate after conference, those bad headlines are just going to continue.

Collins has made a total fool of herself and it gets worse for her every day.

House Speaker Paul Ryan is making sure everyone knows that he was not a party to any of McConnell’s negotiations with Collins and he wants no part of the promises supposedly made. He is making absolutely no commitment to bringing up the legislation stabilizing Obamacare that she conditioned her vote on.

Her only hope of redemption now will be not voting for this travesty when it comes back to the Senate. But she’s already forfeited any claim she’s had on being one of the principled Republicans.

THE FIGHT IS NOT OVER! Republicans must still pass a final version of the tax scam bill through both the House and the Senate. We can still stop this. Call your members AGAIN TODAY at (202) 224-3121.