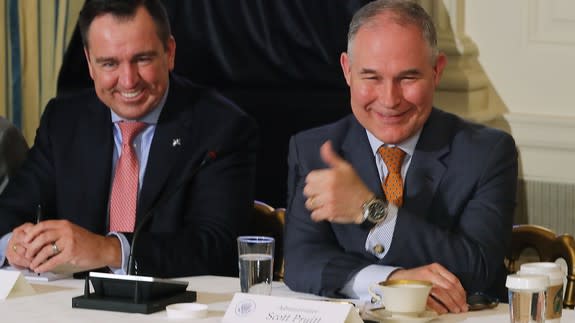 After controversy on top of controversy, Pruitt was found to have used a little-known provision in the Safe Drinking Water Act to give sizable raises to political aides on Tuesday.

The provision permits the EPA administrator to hire up to 30 people without White House or congressional approval, but Pruitt instead used it to hand out raises of $28,130 and $56,765 to his aides, ballooning one of his staffers salaries to more than $160,000. All of this has put Pruitt in hot water with his political counterparts in Washington, with some calling for his resignation over ethical issues.

SEE ALSO: Here’s a running list of all the Scott Pruitt scandals

A day after the news broke, Pruitt granted Fox News an exclusive interview to deny knowing about the raises. You might have imagined it went well, since Pruitt almost only goes on Fox News and other friendly outlets. But, actually, it did not. At all. See the clip below.

“Now if you’re committed to the Trump agenda, why did you go around the president and the White House and give pay raises to two staffers?” Fox News national correspondent Ed Henry said.

“I did not, my staff did and I found out about it yesterday and I changed it,” Pruitt responded.

“I found out about this yesterday, and I corrected the action. And we are in the process of finding out how it took place and correcting it,” Pruitt said.

Henry then went on to point out that both of the staffers who received the raises — Sarah Greenwalt and Millan Hupp — are friends of Pruitt’s from Oklahoma, a point that Pruitt dodged. He then also pointed out that the largest of the raises is just about equal to the median income in the country, some $57,000.

“They didn’t get a pay raise,” Pruitt responded. “I stopped that yesterday.”

It’s not the best look for Pruitt, who seems to be having scandal after scandal break by the minute. In Wednesday’s White House press briefing, Press Secretary Sarah Sanders was asked if Trump is OK with Pruitt’s actions, to which she replied, “The president’s not, we’re reviewing the situation.”

It’s a rapid departure from the White House’s message just a few days ago, when President Trump reportedly called Pruitt and said “Keep your head up, keep fighting.”

Pruitt, who does not recognize mainstream climate science findings and has called for a televised science debate with climate deniers, has played a leading role in undoing the Obama administration’s actions to cut greenhouse gas emissions from global warming.

This week, he announced a move to rescind the Obama-mandated car and truck fuel economy standards, meant to incentivize more fuel efficient cars, and he has taken numerous other steps that would increase U.S. emissions compared to the track we were on before President Trump took office.

So, maybe, Pruitt should stay away from the TV. You know, until the next scandal breaks.

WATCH: We could see a decline in King Penguins thanks to — you guessed it — climate change