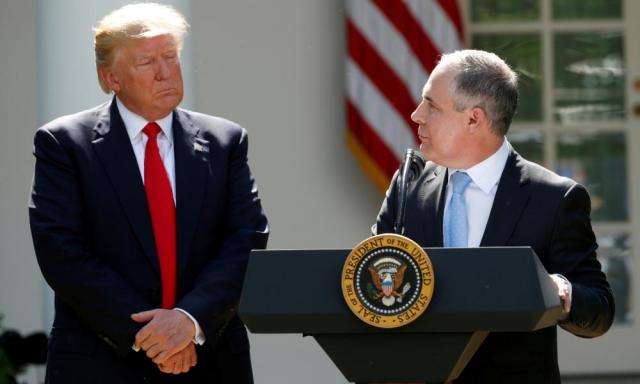 If his actions continue in the same direction, during Pruitt’s term at the EPA the environment will be threatened instead of protected, and human health endangered instead of preserved, all with no long-term benefit to the economy.

As a perfect example of those actions, the Daily Caller recently reported that at a gathering at the fossil fuel-funded Heritage Institute, Pruitt announced that the EPA and federal government will soon end two important science-based practices in evaluating the costs and benefits of regulations.

When the EPA regulates pollutants, the practice often yields what are called “co-benefits.” For example, limiting allowable mercury pollution can force dirty coal power plants to install pollution-control equipment or shut down. Since coal plants produce other pollutants like soot, the regulations not only reduce mercury levels, but also particulate matter in the air. The latter isn’t an intended consequence of the regulations, but creating cleaner air and healthier Americans are unintended “co-benefits” of limiting another pollutant.

In doing cost-benefit analyses, the EPA accounts for all direct benefits and indirect co-benefits of its regulations. Certain industry groups and conservative pundits don’t like that approach, because they care more about polluter profits than they do about clean air and healthy Americans. However, during the George W. Bush administration in 2003, the Office of Management and Budget issued a guidance saying that it’s important to consider co-benefits:

Your analysis should look beyond the direct benefits and direct costs of your rulemaking and consider any important ancillary benefits and countervailing risks. An ancillary benefit is a favorable impact of the rule that is typically unrelated or secondary to the statutory purpose of the rulemaking (e.g., reduced refinery emissions due to more stringent fuel economy standards for light trucks)

Pruitt wants to disregard this Bush-era guidance and instead consider only the costs and benefits of regulating the “targeted pollutant” (mercury, in our example). They want to ignore the lives saved by also incidentally reducing particulate matter pollution. To be blunt, this makes no sense, unless your goal is to protect polluters at the expense of public and environmental health.

As a backup argument, industry groups argue that the EPA overestimates these co-benefits because particulate matter (specifically, PM2.5) isn’t harmful to human health below a certain threshold value. Not coincidentally, Pruitt’s EPA hired a scientist who has argued that American air is “a little too clean for optimum health.” However, EPA looked at the associated science and issued a memo in 2012 concluding:

Studies demonstrate an association between premature mortality and fine particle pollution at the lowest levels measured in the relevant studies, levels that are significantly below the [National Ambient Air Quality Standards] for fine particles. These studies have not observed a level at which premature mortality effects do not occur. The best scientific evidence, confirmed by independent, Congressionally-mandated expert panels, is that there is no threshold level of fine particle pollution below which health risk reductions are not achieved by reduced exposure.

The bottom line is that when considering all effects, the benefits of EPA pollutant regulations often far outweigh their costs. However, the American public sees the benefits in the form of cleaner air and water, better health, and avoided premature deaths, while industries bear the costs of complying with the regulations by reducing their pollution. Hence industry groups and their allies in the Pruitt EPA are trying to cook the books to favor profits over public health. It’s worth reflecting on the disparity between the president’s claims that EPA’s goal is to achieve “record clean Air & Water” and its apparent actual goal of maximizing polluter industry profits.

Climate costs get a similar treatment

At the Heartland Institute gathering, Pruitt also promised that the Trump administration will stop using the ‘social cost of carbon’ – an estimate of how much carbon pollution costs society via added climate damages – in crafting regulations. The Obama administration first started using the social cost of carbon in cost-benefit analyses of various government regulations. For example, when the Department of Energy considers stricter energy efficiency standards for appliances, it will account for the benefits of slowing climate change by reducing electricity consumption. Industry groups challenged that policy in court, but the Obama administration won.

Under Trump and Pruitt, the EPA has started engaging in bogus accounting to deflate the estimated social cost of carbon, and now Pruitt has promised they’ll stop using it altogether. It’s simply another way for the EPA to put industry profits above public health benefits.

Environmental groups are ready to take Pruitt to court

Pruitt hasn’t yet made good on these promises to the polluting industries, but if he does, environmental groups are confident they can beat him in court. David Doniger, senior strategic director of the National Resource Defense Council’s climate & clean energy program told me:

If Pruitt finalizes the Clean Power Plan repeal or any other rule by revising consideration of co-benefits in this way, or dropping them entirely, you can be 100% sure that we and others will sue, probably in D.C. Circuit challenges to his actions. We are confident the courts will hold this reversal of practice arbitrary and capricious. The only sound way to assess the benefits of a rule, and to weigh them against costs when that is allowed, is to assess all the benefits that can be reasonably expected to come from the action.

It’s also important not to let Pruitt’s rank corruption and scandals distract from the damage he’s doing to EPA’s mission. As Christine Todd Whitman noted, the whole world is worse for Trump having nominated and the Senate GOP having confirmed Scott Pruitt to lead the EPA into a new era of maximizing industry profits and pollution at the expense of public and environmental health.