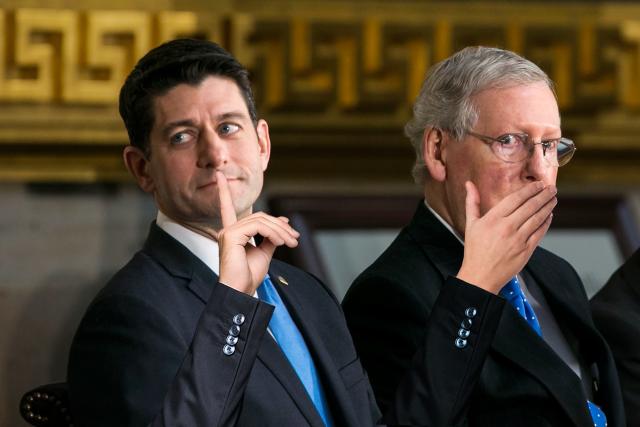 The revelation that the FBI raided the New York offices of longtime Trump lawyer and noted hush money dispensary Michael Cohen on Monday has sent our president into another one of his trademark spells that leave White House reporters scrambling to identify previously-unused synonyms for “angry.” And despite hints that the searches were conducted at the direction of the U.S. Attorney’s office in New York, Trump, surrounded by grim-faced members of his Cabinet, directed his ire elsewhere. “Why don’t I just fire Mueller?” he mused. “Well, I think it’s a disgrace what’s going on. We’ll see what happens.” He added: “Many people have said you should fire him.”

The speaker has adopted a strategy of willful ignorance for dealing with whatever unhinged nonsense Donald Trump said the night before. “As the Speaker has always said, Mr. Mueller and his team should be able to do their job,” explained a Ryan spokesperson after the president’s weekend fusillade against Mueller in March. When pressed, Mitch McConnell praised Mueller’s integrity but declined to protect the investigation from presidential interference on the grounds that McConnell doesn’t believe that the president will fire him. “I don’t think that’s necessary,” he said after Trump smeared the Russia probe as a partisan witch hunt. “I don’t think Bob Mueller is going anywhere.” On Tuesday, he trotted out more of the same.

This is nice, if Mitch McConnell’s hunch is right. But he seems to suggest that the only appropriate catalyst for taking action to prevent Trump from firing the special counsel would be… Trump firing the special counsel. This is not how prospective legislation works. And if he is wrong—if, hypothetically speaking, his trust in Donald Trump’s patience and good temperament is misplaced, and if the president ignores the advice of his lawyers and moves to oust Mueller anyway—Congress’ failure to act will be solvable only with a time machine. I do not believe that Mitch McConnell has invented a time machine.

Watch:  What if Trump Actually Fires Mueller? See the video.

For Ryan and McConnell, their approach to the Mueller investigation has always been the product of a complex risk calculus. When it was in its early stages, they paid lip service to its importance because they understood that firing the special counsel would have been a de facto admission of wrongdoing in the court of public opinion, which, in turn, would have hampered their efforts to take health care away from poor people and give tax cuts to rich people. At last, they had the scenario they always dreamed of: a unified Republican government, and an empty vessel of a president who would obediently sign whatever bills they put in front of him. All they cared about was ensuring that Trump’s impetuousness didn’t hasten its end.

As Mueller reaches the president’s inner circle, though, the investigation, not Trump’s urge to obstruct it, emerges as the most significant obstacle to the implementation of the Republican agenda. Ryan and McConnell are about to spend the summer trying to convince the American people that the GOP has earned itself another two-year legislative majority. An ongoing investigation that yields a growing collection of guilty pleas from the party’s scandal-ridden presidential administration will not be a helpful element of that sales pitch. And while they can’t openly call for Trump to fire Mueller, they can remain conspicuously quiet whenever the president floats the possibility of doing so in public.

Paul Ryan and Mitch McConnell have never been mistaken for paradigms of moral courage. But their persistent failure to denounce the president’s attacks on an investigation they claim to support is as much a product of ideologically-motivated pragmatism as it is one of inveterate spinelessness.

If Mueller’s work proceeds at its current pace, there may come a point at which Republican leadership decides that for the sake of their policy goals, they’d rather take their chances with a constitutional crisis than face whatever damning facts the investigation might uncover if it were to continue unabated. To Ryan and McConnell, Mueller has gone from inconvenient irritant to existential threat, and they need him gone. Their silence demonstrates that as clearly as their words ever could.