Our  Demeaner in Chief If anyone’s still hoping trump will somehow become “Presidential,” they’re as delusional as he exhibits daily.

If anything, he’s doubling down on pandemonium, by orchestrating chaotic episodes of the “Apprentice,” where at the end of the week, someone’s summarily canned and sent down the elevator to a waiting limo.

Unfortunately the impact of such fantasy playing out in the West Wing is not as benign as trump’s inconsequential reality show. Dedicated career employees like James Comey and Sally Yates, fired for refusing blind loyalty to king Donald, just fired Andrew McCabe, who backed up Comey’s narrative of his disputed encounters with trump, eminently respected business executive Rex Tillerson, unceremoniously fired by tweet after criticizing the Russians for dastardly deeds in Syria and in London last week, fired high level State Department official Steven Goldstein, who authored an official State Department statement that conflicted with White House accounts of how Mr. Tillerson was jettisoned, and countless additional federal career employees who’ve been fired, or have resigned like Gary Cohn, or retired in the face of trump administration discombobulation, are the intended consequences of trump’s scripted, bizarre notions of “Presidential” decorum.

trump’s done more damage to our institutions and  governing infrastructure than any president in history and couldn’t care less about the human flotsam. 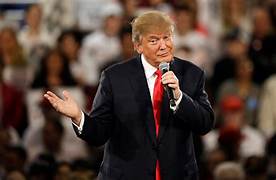 We’ve witnessed an unprecedented (40%) turnover in trump administration employees. Granted, many of these employees should never have been allowed near the West Wing or even through the front gate of 1600 Pennsylvania Avenue, considering dozens couldn’t qualify for security clearances, but this isn’t normal by anyone’s standards.

trump hired Scott Pruitt to head the EPA, even though Pruitt spent decades opposing the Environmental Protection Agency’s mandate to protect America’s air, water and land; hired Betsy DeVos for Secretary of Education, even though she’s been described as the strongest opponent of public education; hired Rick Perry for Secretary of Energy, even though he hadn’t a clue of what that job entailed; hired Ben Carson for Secretary of HUD because he once lived in an apartment; hired Wilber Ross for Secretary of Commerce apparently because he’s an expert at laundering Oligarchs money, hired Steven Munchin for Secretary of Treasury because he made a fortune foreclosing on Veterans and middle class mortgagees in distress after the financial collapse, hired Mick Mulvaney because he routinely railed against the Consumer Financial Protection Bureau and middle class entitlement programs; hired Tom Price, a staunch opponent of Obamacare and social safety net programs, for Secretary of Health and Human Services, before he was fired for insider trading in health stocks and squandering taxpayers money on extravagant travel expenses; hired Ryan Zinke for Secretary of the Interior because he, like trump, is bound and determined to turn over America’s National Parks and public lands to fossil fuel and mining interests.

I could go on and on but the point is, trump’s idea of “Best and Brightest” is in stark contrast to the Obama administration, who actually hired experts qualified and eager to improve their departments, not destroy them.

With a few exceptions, like Gary Cohn and Rex Tillerson, and probably Generals Mattis and McMaster, would any respectable major corporation or organization hire for department level positions, any of the unqualified and flawed characters trump hired as his “best and brightest?”

We soon learned, trump’s main focus was not to find and assign the “Best People,” who might exhibit expertise for a particular position in his administration, but to appoint someone keen on undermining the basic institutions America relies on to effectively govern in a democratic society. Sadly, Democratic principles are foreign to trump’s business and ethical sensibilities.

Is it any wonder this cast of political misfits have run amuck. MSNBC’s Rachel Maddow Show struggles to keep a running list of all the casualties of trump’s administration. The show had to reconfigure her set so that all three columns showing more than 50 names could fit in the screen. Most of the people brought into trump world seem to have one thing in common. They’re either adept at sycophancy or are tarnished individuals previously engaged in all sorts of dubious or criminal conduct. Fraud, money laundering, insider trading, domestic abuse, tax fraud, gambling, unbound avarice, no holds barred self dealing, back stabbing, or any form of anti social behavior is a plus on their resumes.

In any other administration in America’s history, these tarnished miscreants would have never been considered, let alone employed. But trump views their moral character flaws as a badge of courage, examples of business genius and resourcefulness. Winning at all costs is integral to trumps idea of fairness and proof of a persons ideological bona fides.

Bad conduct seems a pre-requisite for entering trumps world, and unquestioned loyalty is required for staying there.

Once that loyalty fades for even a moment, the king issues the decree; “you’re fired!” 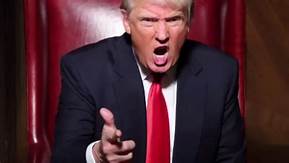 The list of casualties grows daily and is too numerous to mention here. But after the firing dust settles, trump moves people around like pieces on a chess board, not with any  consideration of talent or fitness for the job but with the main goal of securing loyalty.

trump’s only left with rearranging the human deck chairs on the Titanic because most potential qualified applicants have enough sense to steer clear of this toxic environment. 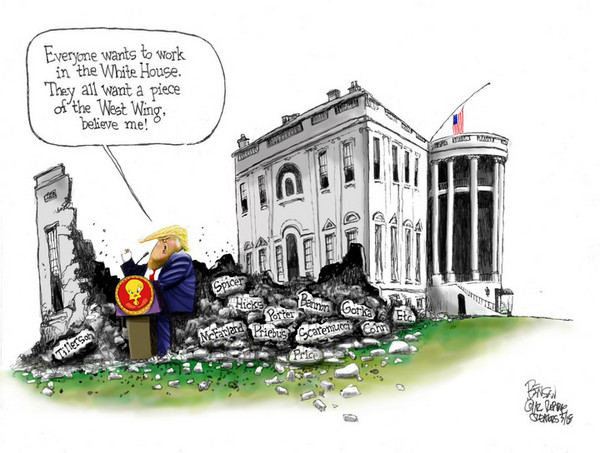 No one’s surprised trump’s engulfed in the Stormy Daniels reality show scandal. No one’s surprised he cheated on his wife while she was carrying his child, or that he tried to cover it up. We’re no longer surprised when the daily calamity and sleaze oozes from the White House. 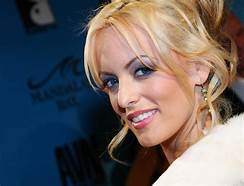 No one’s surprised trump’s looking for his 5th communications director. Lying to the public and the press is the primary prerequisite. No one’s surprised he fired Rex Tillerson with a Tweet, or that he lied to Canadian Prime Minister Justin Trudeau and then bragged about it during a campaign stop, or that he’s been trying to fire Attorney General Jeff Sessions for months, or that he browbeat Sessions into firing Andrew McCabe a day before he was to retire and collect a pension, or that he’s chomping at the bit, to fire Deputy Attorney General Rod Rosenstein, Special Investigator Robert Mueller, National Security Advisor McMaster and probably at lease a half dozen other employees Fox News implores him to ditch and demean.

trump is the ultimate tarbaby, the pre-eminent Brer Rabbit like trickster, who schemes and connives and creates havoc all along his gold plated career paths and in every situation he engages, but then wriggles free at the last minute by turning the tables on acquaintances, employees and business partners. He employs the Midas touch in reverse. Yet he seems to escape every self imposed calamity unscathed, while those who pledged their allegiance, believed in his shtick, who fell for his cons, have crashed and burned.

trump lives to denigrate anyone and everyone at one time or another, except for the Russians and Vladimir Putin, who if you watch late night talk show satire and Saturday Night Live skits, would be an easy target for trump’s particular form of belittlement.

But trump refuses to criticize the Russians and quickly fires anyone, including Tillerson and maybe soon McMasters, when they speak out publically about Russian transgressions. Why isn’t trump troubled by Russian threats to world stability, to our democratic institutions, our critical infrastructure and our national security? It begs the question, what are the Russians holding over our Demeaner in Chief? 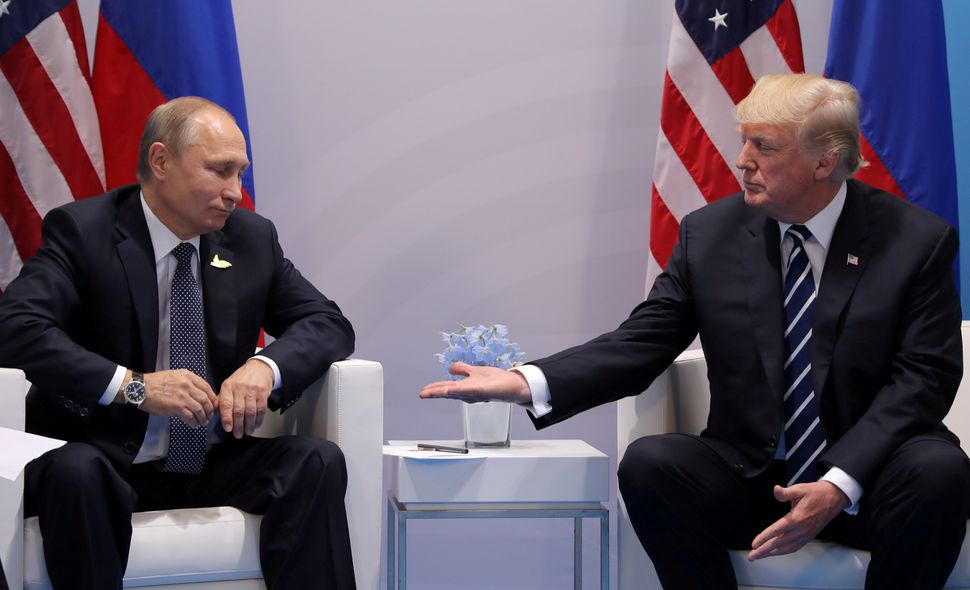 What would trump’s unflinching base of enablers say if President Obama had done a fraction of what trump calls winning? When will the Republi-con controlled congress decide they’ve had enough? 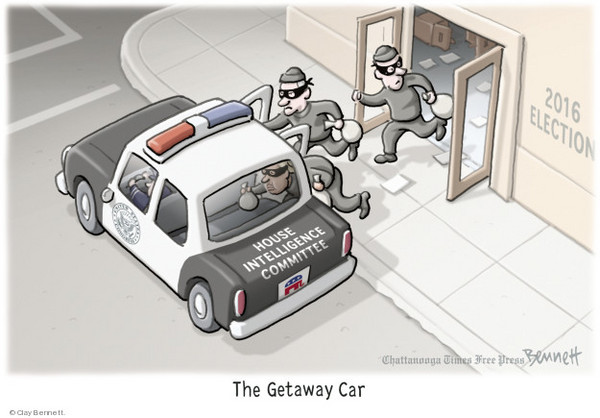