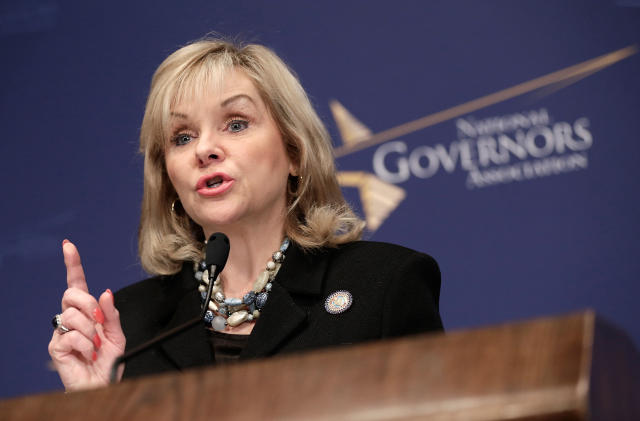 Teachers in Oklahoma still plan to walk off the job next week after state legislators passed an education funding bill that fell apart within hours.

Initially it seemed the legislation, signed Thursday by Gov. Mary Fallin (R), would quell the statewide walkout that educators had set for April 2 to demand more money for schools. But not even a day after the state Senate approved the first tax increase package in years, legislators in the state House voted to undo one of its main provisions, a tax on hotel and motel stays.

After applauding legislators for approving the funding bill, the state’s leading teachers union, the Oklahoma Education Association, renewed its call late Thursday for teachers around the state to stay out of school and descend on the Capitol in Oklahoma City on Monday.

“Yesterday, the Legislature passed a historic education funding increase,” the union said Thursday in a Facebook post. “Today, they started dismantling it by cutting millions out of the plan. Now they’re gone for the weekend. Oklahoma: we’ll see you at 9 a.m. April 2 at the Capitol.”

Oklahoma is one of a wave of red states now facing a teacher revolt after years of anemic funding for education.

Over the past decade, Oklahoma carried out a series of tax cuts that, combined with falling energy prices, have left the oil- and gas-rich state with little money to steer toward teachers or textbooks. It’s more or less the same story that played out in West Virginia, where tax cuts forced educators to forego raises while their health care costs increased. Teachers there walked off the job for nine days in February and March, prompting the state legislature to fund pay increases for public employees.

The historic and successful strike in West Virginia has inspired a burgeoning uprising among austerity-weary teachers around the country. In addition to Oklahoma, Arizona could soon face a strike by teachers, who are demanding the state boost pay by 20 percent and return to pre-recession funding levels for education. (Meanwhile, teachers in Kentucky shut down public schools in 25 counties on Friday to protest proposed cuts to the state pension plan.)

Teachers in West Virginia, Oklahoma and Arizona are all among the lowest-paid in the country, with schools facing growing teacher shortages. Republicans control the statehouse and governor’s office in all three states.

“After ten long years in a lot of these conservative states, the chicken is finally coming home to roost,” said Lily Eskelsen Garcia, president of the National Education Association, the 3-million member union with which the Oklahoma Education Association is affiliated. “They’ve given tax breaks to big corporations, defunded public schools, and said, ‘What could go wrong?’”

After Oklahoma legislators passed the tax hike, it seemed the walkout could turn instead into a one-day rally on Monday. Now nobody knows for sure what next week will bring. The mixed actions by Oklahoma’s legislature could lead to a situation where some school districts close only for Monday or not at all, while others engage in a work stoppage for days. Many Oklahoma teachers on Facebook have called for keeping schools shut down until all their demands are met.

We have buildings that are falling apart and textbooks that need to be taped together. Beth Wallis, assistant band director

To a certain degree, their walkout will require the cooperation of their largely sympathetic superintendents, who decide whether schools are formally open or closed. If schools are open and teachers refuse to return to work, the state could consider it an illegal strike. Several districts announced Friday that their schools would not be open on Monday.

Beth Wallis, an assistant band director who teaches in a Tulsa suburb, said teachers in her district voted unanimously to stay off the job beyond Monday. Although the legislation passed this week includes average pay raises of $6,100, Wallis said the lack of state funding guaranteed in the bill could leave local districts on the hook to pay for them. She also said securing teacher pay raises is secondary to increasing general school funding.

“The school funding in the bill is laughably small,” Wallis said. “It’s not enough to buy every kid in my district a single textbook. We have buildings that are falling apart and textbooks that need to be taped together.”

Like most states, Oklahoma cut school funding in the wake of the Great Recession. But it also pursued tax cuts during the economic recovery that followed, dropping income taxes and reducing the gross production tax on oil and gas companies. With little money to devote to schools, Oklahoma has led the nation over the past decade in cuts to its education formula funding, which is the main well of state money for individual districts.

“They sort of maximized the damage that the recession did to their schools and other public services, and as the economy improved, they kept cutting taxes,” Michael Leachman, an analyst at the Center on Budget and Policy Priorities, recently told HuffPost. “You’re just digging your hole even deeper.”

With less funding, many cash-strapped schools have gone to four-day weeks, while certifying a growing number of emergency teachers to fill vacant jobs. Such teachers don’t meet the state’s normal minimum requirements to teach in public school. The union says the state will have to increase salaries and school funding significantly if it wants to stop losing teachers to Arkansas and other nearby states that pay better.

Reversing course will not be easy. Approving tax hikes in Oklahoma is extraordinarily difficult, requiring a three-fourths supermajority in both chambers. Legislators were barely able to approve the tax package that has already foundered. Legislators had only hours to digest that bill before it was passed, and many apparently did not have time to read it. One state representative argued that the bill had a $75 million hole in it before taking the repeal of the hotel and motel tax into account.

“The more the bill has gotten to sit,” Wallis said, “the more people have gotten to read it and find problems with it.”