Oklahoma, America’s No. 2 wind producer, sours on the industry

A massive state budget crisis, along with powerful oil and gas interests, has led the state to phase out key tax incentives for wind. 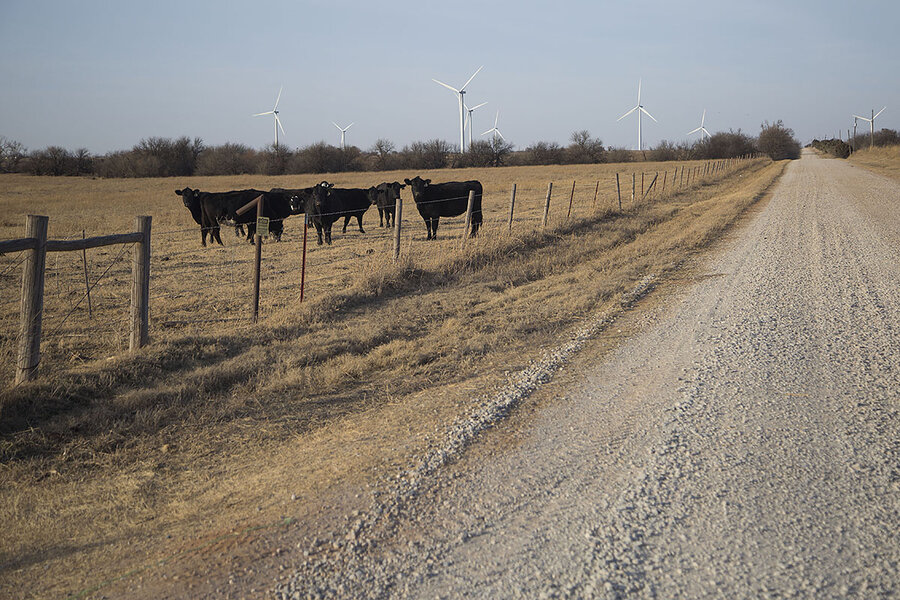 Garber, Oklahoma. First the wind came sweeping down the plain, then the dollars, and now the controversy.

With ever more spiky wind turbines cropping up across its open lands, Oklahoma has just become the No. 2 state in the country for wind energy production, the American Wind Energy Association announced Tuesday. That has been a boon for local communities, but it has also come at a price for the state, which pays tens of millions of dollars a year in subsidies for wind companies. As the industry grows, so does the price tag for wind incentives.

Now a new project – Wind Catcher, which is slated to be one of the largest wind farms in America – is facing stiff resistance and could be scrapped altogether.

The Wind Catcher case comes amid a pushback on wind incentives, galvanized by a state budget crisis and influential oil and gas interests. In the past year, Oklahoma has ended two key incentives that even wind proponents admitted were in some ways “too generous.”

“I’m hopeful that the current balance that we’ve struck between local taxation and making sure that we’re not penalizing a new technology – I’m hopeful that that balance stays in place,” says state Sen. AJ Griffin (R) of Guthrie, who says she encourages investment in wind “without giving away the farm.”

But some are pushing not only to remove all subsidies, but to levy a new tax on wind.

Think you know the odd effects of global climate change? Take our quiz.

One of America’s largest wind farms

Under the whirring of turbines in Oklahoma’s Garfield County, Craig Schlichting hauls rock, agricultural lime, and grain for a living.

He’s not particularly keen on wind, but with the agricultural economy flagging, he sees the industry’s positive effect on his community of Garber, Okla. There’s a new blacktop road being laid down, and a smart new school building a mile away. Then there’s the wind companies’ payments to those with turbines on their land.

“It’s scuttlebutt, but the guys who have them say [the wind companies] pay $10,000 per year,” says Mr. Schlichting, standing in well-worn striped overalls. “In a poor state, it’s good money.”

The money coming into the county through such landowner payments is equivalent of the paying 194 employees at the county average wage – which would put it among the top-10 companies in the area, says Brent Kisling, executive director of the Enid Regional Development Alliance in Garfield County.

Now Enid stands to benefit from the $4.5 billion Wind Catcher project, which includes plans to build a 350-mile transmission line that would pass through the area, bringing supply-chain jobs, says Mr. Kisling.

Public Service Company of Oklahoma (PSO), which is investing $1.3 billion in the project, says Wind Catcher will save Oklahoma electric customers an estimated $2 billion over 25 years. That would be a relief for many in a state where summer electric bills often run $400 or more a month.

But there’s a problem.

PSO skipped a required competitive bidding process for building the transmission line. That was intentional: It wanted to finish the project before a federal tax credit expires at the end of 2020, says spokesman Stan Whiteford. Now it needs an exemption from the Oklahoma Corporation Commission (OCC), which regulates public utilities.

PSO is asking the state to approve a rate hike to help finance its investment, and says that the added cost to consumers will be quickly canceled out by the savings of wind power. The OCC held hearings this month over whether to approve the exemption and the rate hike. A decision is expected in early spring.

One of the strongest opponents to the project is Attorney General Mike Hunter, whose job is to protect Oklahoma consumers.

However, Mr. Hunter disputes PSO’s savings estimate. He has experience with public utility cases, having previously worked for OCC, and says the Wind Catcher project is likely to cost consumers around $320 million.

He also underscores that PSO did not follow state rules, plain and simple, and must be opposed on that basis.

“My responsibility is to the ratepayers of the state of Oklahoma and that responsibility is a statutory responsibility, it’s consistent with my oath of office, and the case that we’re putting on is based on careful investigation, thoughtful review of evidence, and the law,” Hunter tells the Monitor. “And that is my sole motivation in this matter.”

What makes a level playing field?

Pro-wind critics argue that the opposition to Wind Catcher – and the wind industry in general – is being driven by influential oil and gas magnates like Harold Hamm, an ally of President Trump and former Oklahoma attorney general Scott Pruitt.

“Certainly everybody in Oklahoma knows there’s been a Harold Hamm vs. wind fight for several years,” says Jeff Clark, head of the Texas-based Wind Coalition. “He’s not intervening so Wind Catcher gets built more competitively. He’s intervening because he wants to kill Wind Catcher.”

Mr. Hamm’s office did not respond to multiple requests for comment. But he has argued that wind subsidies are no longer necessary in light of a federal tax credit extension for wind, and says the subsidies primarily benefit out-of-state companies whose power often goes to out-of-state customers.

Jonathan Small, president of the Oklahoma Council for Public Affairs in Oklahoma City and an early member of The Windfall Coalition spearheaded by Hamm, says it’s more about free-market economics than favoritism.

“I think the vast majority of lawmakers and citizens would say it has more to do with lack of a level playing field than not liking wind,” says Mr. Small, a former budget analyst for the Oklahoma Office of State Finance. He says the budget crunch focused scrutiny on wind incentives, and cites a statistic that each turbine costs taxpayers more than a teacher’s starting pay – a figure calculated by Wind Waste on an Apex wind installment in Oklahoma’s Kingfisher County. (Teachers are in such short supply that some Oklahoma school districts have gone to four-day weeks.)

But proponents of wind argue that oil and gas subsidies cost the state significantly more than wind subsidies, despite wind’s growth in recent years. A 2017 Oklahoma Policy Institute paper calculated that in fiscal year 2018 the state would forgo more than $500 million in revenue due to tax breaks for oil and gas.

“I think a lot of it is that [oil and gas entities] want to have their incentives, but they don’t think the wind should have the same incentives,” says Jan Kuehn of Kingfisher County, who has Apex wind turbines on her land as well as oil wells that still pay her royalties. “I think the wind people left the land and the roads in better shape than before they came – which is a great help because as most states, Oklahoma is strapped for money.”

In May 2016, Oklahoma’s secretary of finance announced that the state had needed to borrow $5 million from other funds that month to pay refunds due corporations, including $3.3 million in zero-emission credits to wind companies. The following year, the legislature ended that incentive for new wind farms, as well as a five-year property tax exemption.

Kisling of the Enid Economic Development Alliance says what’s needed is a shift away from zero-sum thinking.

“We’ve spent too much time as a state [debating] who gets which slice of the pie,” he says. “We ought to spend more time figuring out how to increase the size of the pie.”

Did this story deliver on patterns of thought?   Give us your feedback, please.