The UN Committee on the Elimination of Discrimination against Women found in its review of the North that women who managed to escape the regime’s clutches but were later brought back faced rape and assaults while in detention, Reuters reported.

According to the panel, the women who flee and return “are reportedly sent to labor training camps or prisons, accused of ‘illegal border crossing,’ and may be exposed to further violations of their human rights, including sexual violence by security officials and forced abortions.”

The panel said penalties for rape — including child rape, rape by a superior at work and recurrent rape — decreased in severity in 2012. In the case of rape by a work supervisor, the penalty was lowered from four years to three years in prison.

Kim himself was accused of having young girls pulled out of schools to be his sex slaves by a defector in September.

Women also lack access to education and are “under-represented or disadvantaged” in North Korea’s judicial system, according to the panel. Opportunities for management and leadership roles are scarce for them.

Twenty-eight percent of pregnant or lactating women were found to have “high levels of malnutrition.” 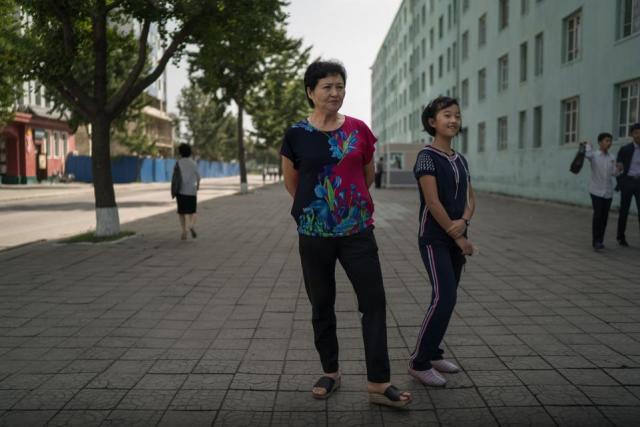 In a photo taken on September 24, 2017 a women and child stand on a street in Pyongyang. AFP via Getty Images/Ed Jones

North Korea reportedly told the panel November 8 that recent economic sanctions were to blame for the poor treatment of women, and the panel agreed that the sanctions disproportionately affected women.

The United States and the UN have repeatedly tightened sanctions on the North this year to deter its rapidly expanding nuclear and missile defense programs. Kim has refused to cease weapons testing even as the U.S. and China have offered to come to the negotiating table, and it has accused America and its allies of preparing for a military strike or invasion.

This is only the latest instance of a UN panel exposing rampant human rights violations under Kim’s rule. Pyongyang has had a long and terrible history of human rights abuses and was ranked the fourth-worst nation in the world for human rights by watchdog group Freedom House.

The organization’s recent annual rankings put North Korea ahead of only Eritrea, Tibet and Syria in human rights, with North Koreans’ political rights and civil rights each scored at seven, the worst score possible for those categories.