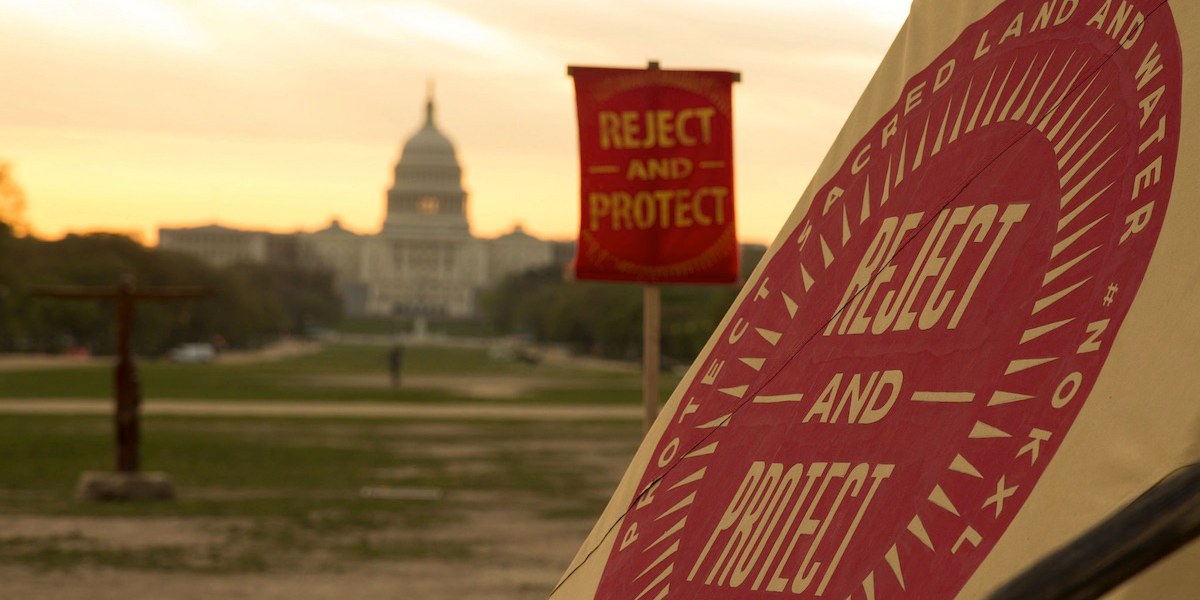 “Enough is enough. Pipelines leak—it’s not a question of ‘if’, but ‘when.’ The pending permit for TransCanada’s Keystone XL pipeline should be flatly rejected by Nebraska’s Public Service Commission (PSC), but know that no matter what the outcome, the fight’s not over yet,” said Scott Parkin, Rainforest Action Netrwork‘s Organizing Director. “We need to stop all expansion of extreme fossil fuels such as tar sands oil—and we need the finance community to stop funding these preventable climate disasters—disasters for the climate, the environment and Indigenous rights.”

CNN reported that the spill occurred in the same county as part of the Lake Traverse Reservation.

According to TransCanada, the Keystone pipeline system delivers Canadian and U.S. crude oil supplies to markets around North America, stretching 4,324 kilometers (2,687 miles) in length. It starts from Hardisty, Alta., east into Manitoba where it turns south and crosses the border into North Dakota. It then runs south through South Dakota to Steele City, Neb., where it splits. One arm goes east through Missouri for deliveries into Wood River and Patoka, Ill., and the other runs south through Oklahoma to Cushing and onward to Port Arthur and Houston, Texas.

The proposed KXL would add to the massive Keystone system, with its line starting in Hardisty, Alberta and ending in Steele City.

In March, President Trump overturned President Obama’s rejection of the KXL by signing an executive order to advance the project forward. Trump said that doing so would boost construction jobs but critics noted that it would only create 35 permanent jobs.

Environmental groups have long battled against the proposed tar sands project, over fears it would lock in decades of increase climate pollution. A peer-reviewed study funded by the U.S. Department of Energy found that extracting and refining oil sands crude from Canada produces 20 percent more greenhouse gas emissions than the same process for conventional American crude, Newsweek reported in 2015.

As the KXL’s proposed route crosses the Ogallala Aquifer, a major underground deposit of fresh water, a spill could threaten waterways and drinking water sources.

“Americans fought the Keystone Pipeline, because we knew it endangered our nation’s water and a stable climate,” Environment America‘s Global Warming Director Andrea McGimsey said in a statement after the spill. “The Nebraska Public Service Commission should look to today’s disastrous leak as Exhibit A when commissioners decide in the coming week whether to allow Transcanada to extend this hazardous pipeline through their state. This latest disaster is an urgent reminder that we must stop building infrastructure for dangerous fossil fuels and transition to clean energy as soon as possible.”

TransCanada said Thursday that it shut down the pipeline after detecting a pressure drop in their operating system. An investigation into the cause of the spill is underway.

“The safety of the public and environment are our top priorities and we will continue to provide updates as they become available,” the company said.

“With their horrible safety record, today’s spill is just the latest tragedy caused by the irresponsible oil company TransCanada,” said Ben Schreiber, senior political strategist at Friends of the Earth. “We cannot let the world’s fossil fuel empires continue to drive government policy toward climate catastrophe. The only safe solution for oil and fossil fuels is to keep them in the ground.”

Brian Walsh, a spokesman for the state’s Department of Environment and Natural Resources told CNN that the were no initial reports of waterways, water systems or wildlife impacted by the leak.

TransCanada said that crews, including its own specialists from emergency management, engineering, environmental management and safety as well as contracted, nationally recognized experts are assessing the situation.

Groups from other states that are facing their own pipeline battles have also decried the incident.

“From the multitude of spills we’ve seen in Ohio along the construction of the Rover Pipeline, to the 210,000 gallon spill today in South Dakota due to a mishap with the Keystone XL pipeline, we should be sure safeguards are in place to ensure that all Ohioans, and Americans, have clean air, land and water,” said Melanie Houston, the director of Climate Programs at the Ohio Environmental Council.

Greenpeace is also urging Nebraska officials to say no to the new pipeline.