Made in the USA, Baby 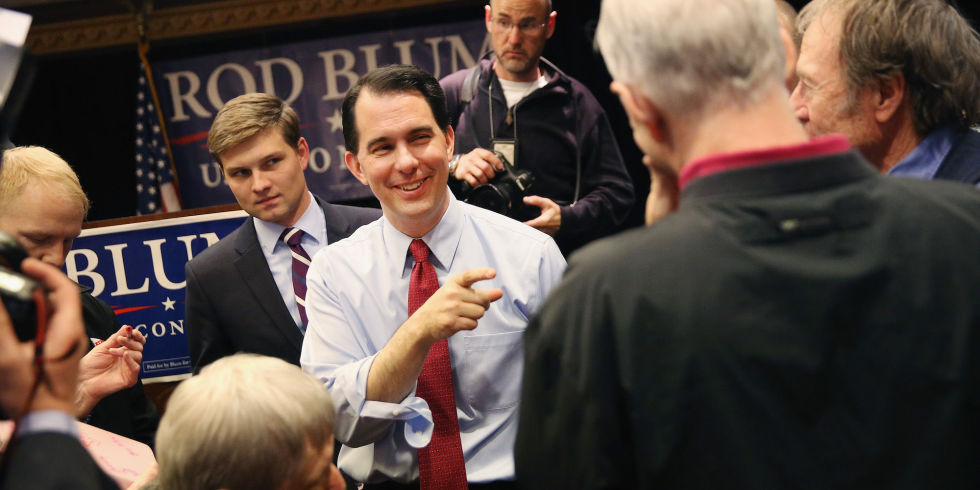 Being our semi-regular weekly survey of what’s goin’ down in the several states where, as we know, the real work of governmentin’ gets done, and where you look for work and money and you walk a ragged mile.

The big news of the week comes to us from Wisconsin, where Scott Walker, the goggle-eyed homunculus hired by Koch Industries to manage that particular Midwest subsidiary, is all puffed up because Foxconn has decided to make liquid crystal screens in his state. Not only that, but the president* and Vice President Galatians are puffed up, too. From the Journal Sentinel:

“This is a great day for American workers and manufacturers and everyone who believes in the concept and the label ‘Made in the USA,’ ” said an ebullient President Donald Trump at the White House announcement. As Republicans in Washington struggle to repeal Obamacare and advance bills on tax cuts and infrastructure, Trump seized on the announcement as a win in a key swing state, crowing that the deal wouldn’t have been done “if I didn’t get elected.” The agreement represents an opportunity as well as a risk for Wisconsin — state lawmakers must now consider a subsidy package nearly 50 times bigger than the state’s previous record.”

It will surprise approximately nobody that the plant likely will be built on the home turf of obvious anagram Reince Priebus and Speaker Paul Ryan, the famous zombie-eyed granny starver. And then, ah, yes. The “incentives.” Always interesting, always reasonable, at the start of the deal.

“At $3 billion for 13,000 jobs, the Wisconsin deal would cost $231,000 per job. The subsidies would total more than the combined yearly state funding used to operate the University of Wisconsin System and the state’s prison system. The company would have to meet certain job and investment targets up front to get the money, which would include up to $1.5 billion in state income tax credits for jobs created, up to $1.35 billion in credits for capital investment and up to $150 million in sales tax exemptions on construction materials. In addition, like other manufacturers in Wisconsin, Foxconn would pay no corporate taxes on profits from sales on products made here. The incentives would cost the state about $200 million a year, but Foxconn’s payroll in Wisconsin could reach $700 million a year, Walker’s office said.”

This next part sounds creepy and more than a little Hazzard Countyish.

The factory project would involve a virtual village, with housing, stores and service businesses spread over at least 1,000 acres, according to interviews. That acreage, a 1.5 square-mile area the size of Shorewood, could be assembled from parcels that initially aren’t contiguous, the source said.

If Wisconsin is very lucky, Foxconn will not run a de facto slave-labor camp the way it does in China. An epidemic of worker suicides in, say, Kenosha would not be good for anyone. From The Guardian:

“In 2010, Longhua assembly-line workers began killing themselves. Worker after worker threw themselves off the towering dorm buildings, sometimes in broad daylight, in tragic displays of desperation – and in protest at the work conditions inside. There were 18 reported suicide attempts that year alone and 14 confirmed deaths. Twenty more workers were talked down by Foxconn officials… The corporate response spurred further unease: Foxconn CEO, Terry Gou, had large nets installed outside many of the buildings to catch falling bodies. The company hired counsellors and workers were made to sign pledges stating they would not attempt to kill themselves.”

Of course, thanks to Walker, Wisconsin is a right to work state now, so who knows? Obviously, this is a massive trust-but-verify gamble by the state government, and I suspect there will be more trusting than verifying involved as the project goes forward. Walker has promised to call a special session of the state legislature to debate the deal. Of course, this probably depends on whether or not he and his legislature ever get their acts together to produce a budget.

Sliding on down to Texas, where there’s an actual special session of the state legislature happening, we find that body still functioning as a petri dish for very contagious and really bad ideas, and doing it at light speed. From the good folk at The Texas Tribune:

“In abortion cases where complications arise, reporting to the state is already required. Under state Rep. Giovanni Capriglione’s House Bill 13, those requirements would get more strict: Physicians would have to submit reports to the state health commission within three days that include detailed information like the patient’s year of birth, race, marital status, state and county of residence, and the date of her last menstrual cycle. Physicians and facilities that fail to comply with the reporting requirements would face a $500 fine for each day in violation. “What I’m trying to do with this law is validate and verify data,” said Capriglione, R-Southlake.”

Of course, why wouldn’t anyone buy that?

Democrats fought the measure, which reproductive rights groups say would violate the privacy rights of doctors and patients, and is an attempt to intimidate abortion providers. It was approved on a 97-46 vote.

And it wouldn’t be a petri dish for very contagious and really bad ideas if bathrooms weren’t involved. From The Waco Tribune-Herald:

“If anything, tensions are running even hotter. Now at stake for Republican Gov. Greg Abbott, who faces re-election in 2018 and has gone against the tide of GOP governors who have shied from following the lead of North Carolina, is whether his party will deliver after ordering them to finish the job in a special legislative session that ends in August. Big business and police —two usually important groups to Texas Republicans — have urged Abbott to drop it. Just as the bill came to floor inside the Senate, police chiefs and commanders from Texas’ largest cities stood outside on the Capitol steps and railed against the effort as a waste of time.”

You have to wonder, don’t you, Governor Greg Abbott? If the police chiefs in Texas think this is a waste of time, exactly how far off the beam has your legislature fallen?

And we conclude, as is our custom, in the great state of Oklahoma, where Blog Official Abandoned Drive-In Theater Monitor Friedman of the Plains brings us yet another tale of stuff being where stuff is not supposed to be. From readfrontier.org:

A little more than half — 52 percent — of the oil estimated by the Corporation Commission to have been released during that time was recovered by the operator or a remediation company, and about two-thirds of the wastewater released was recovered, according to the data. The data reflects releases of oil and wastewater at locations such as well sites and storage tanks, and does not include spills from interstate pipelines, which are regulated by the U.S. Department of Transportation. In many cases, the numbers are only estimates of how much oil or wastewater was spilled, said Matt Skinner, spokesman for the Oklahoma Corporation Commission, and in some cases an estimated amount spilled may not have been provided or noted in the data field by the inspector. “There’s no way of knowing how much higher it would be. Chances are, (actual total amounts) would be to the high side, rather than the low side, but there’s no way of knowing,” Skinner said. “It can be very difficult to gauge unless the operator has the records where we can get a better idea.”

This is your democracy, America. Cherish it.