LPGA golfer on Trump’s golf game: ‘He cheats like hell’ 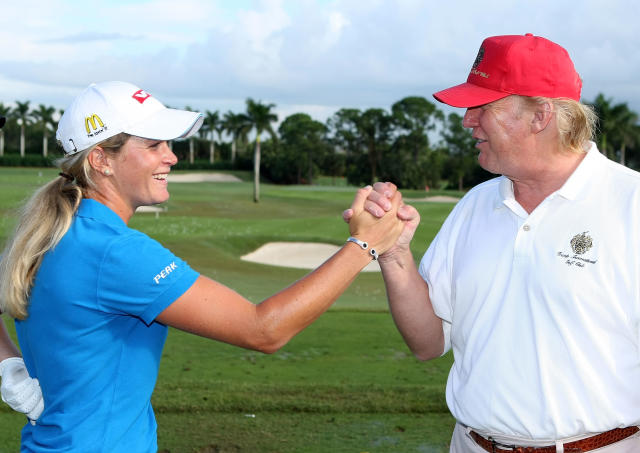 President Donald Trump takes great pride in his golf game, and plenty of notable names have attested to the president’s astonishing, borderline-unbelievable skill on the golf course. But now comes a new perspective.

Suzann Pettersen, a 15-time winner on the LPGA Tour and a frequent playing partner of Trump’s, gave an interview to Norwegian newspaper Verdens Gang in which she talked about her friendship with the president … and she didn’t hold back in her assessment of his game.

“He cheats like hell,” Pettersen said, “so I don’t quite know how he is in business. They say that if you cheat at golf, you cheat at business. I’m pretty sure he pays his caddie well, since no matter how far into the woods he hits the ball, it’s in the middle of the fairway when we get there.” The newspaper notes that Pettersen was “laughing heartily” as she spoke, so spin that however you wish.

Pettersen also noted that Trump picked up the final putt of every round she’d played with him, avoiding that one extra stroke. “He always says he is the world’s best putter,” she said. “But in all the times I’ve played him, he’s never come close to breaking 80.”

That’s a pretty sharp contrast from what others have said about the president’s game, like Sen. Lindsey Graham:

Aspiring pro Taylor Funk said the president shot a front-line 36 when they played recently. Tiger Woods has offered some more measured praise, saying about a year ago that he was impressed with “how far [Trump] hits the ball at 70 years old. He takes a pretty good lash.”

Trump apparently saves his best games for the times when Pettersen isn’t on the course. “[W]hat’s strange is that every time I talk to him he says he just golfed a 69, or that he set a new course record or won a club championship some place,” she said. “I just laugh. I’m someone who likes being teased and I like teasing others, and Trump takes it well, and that must be why he likes me.”

Pettersen said she considers Trump a friend—she caught some heat on Twitter for congratulating him on his victory in November 2016—but adds that she is “not a supporter of what he says or stands for.” She added that she takes Trump’s words in what she considers a proper perspective: “I’m sure he has said things that can be hurtful to a lot of people, but I take everything he says with a pinch of salt. I know where it’s coming from.”

After the story was published, Pettersen tried to walk back the implication that Trump was a cheater by using the same tired “fake news” line that always seems to come up when facts don’t line up with feelings:

So either the reporter falsified an entire raft of detailed quotes about Trump’s corner-cutting on the golf course, or Pettersen saw how the words looked in print and tried to recant. You can decide for yourself which you believe, but it’s worth noting that half a dozen other people from Oscar de la Hoya to Samuel L. Jackson to Alice Cooper have either stated or strongly, strongly hinted that Trump cheats on the golf course.

Believe what you want to believe, friends. But if you ever get a chance to golf with the president, make sure to let us know how it goes.
____ Jay Busbee is a writer for Yahoo Sports. Contact him at jay.busbee@yahoo.com or find him on Twitter or on Facebook.